When agribusiness corporations export food at artificially low prices, they widen the economic divide between the global North and South — and within rural America.

by Sophia Murphy and Karen Hansen-Kuhn

The Trump administration is threatening to crack down on foreign steel producers who are allegedly dumping cheap steel into the U.S. market. “Dumping,” the practice of exporting goods at prices lower than in the country where the goods are produced, is widely considered an unfair way to gain foreign market share.

But you’re unlikely to hear Trump officials complain about dumping in agricultural trade because in this sector, it’s the U.S. exporters who are at fault.

The Institute for Agriculture and Trade Policy (IATP) has used World Trade Organization formulas to document the systematic dumping of U.S. grown agricultural commodities (specifically wheat, soybeans, corn, cotton, and rice) for two decades. They found that in the wake of the volatile commodity markets that dominated in the period from 2007 to 2013, export prices largely exceeded production costs. In recent years, however, U.S. agricultural commodity dumping has started again. According to IATP’s calculations, in 2015 U.S. wheat was exported at 32 percent less than the cost of production, soybeans at 10 percent less, corn at 12 percent less, and rice at 2 percent less.

For the farmers who grow the same (or substitutable) crops in the importing countries, agricultural dumping makes it nearly impossible to make a profit. It is especially devastating for such farmers in low-income countries, where governments have no means to provide compensation, nor the economic power to use trade rules to defend their markets.

Dumping creates unfair competition for producers in other exporting countries, too. And by encouraging overproduction in the United States, dumping traps U.S. producers as well, forcing them to engage in a never-ending push for higher yields or bigger farms, or both.

The biggest winners from dumping are the handful of agricultural commodity trading corporations that dominate the markets (four corporations control an estimated 75-90 percent of the global grain trade). Their enormous market power allows these agribusinesses to squeeze small farmers and consumers, keeping the vast majority of profits for themselves. Farmers typically earn just a few pennies out of each dollar of food their grain goes into making. 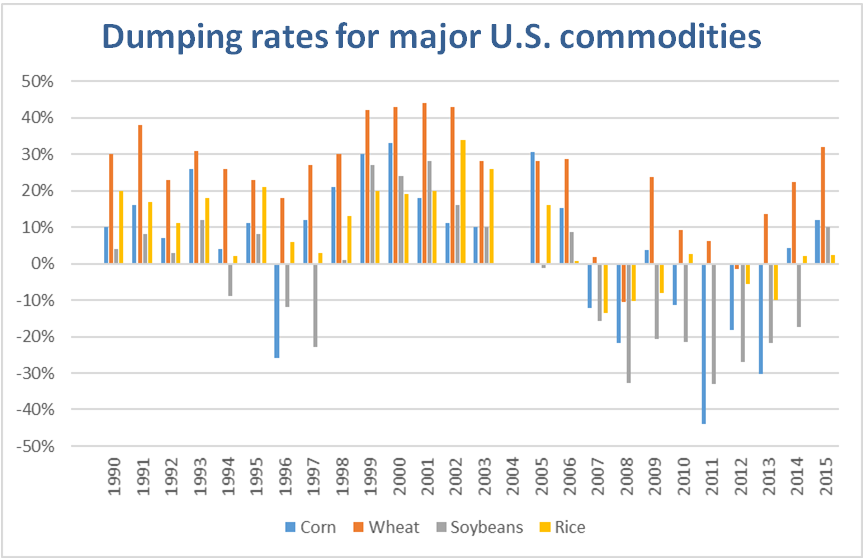 Farmers do make a profit some years. But many other years farmers work at a loss, while agribusinesses make money much more consistently. When we look at the cost of production and the movement to ports and then to export, there are profits and losses at various stages but much of it is hidden behind vertically integrated supply chains, for example when grain traders own feedlots or when poultry producers contract with farmers to control the breeding and raising of chickens while also controlling the processing and marketing.

Corporate concentration in nearly every sector of agricultural inputs, production, processing and distribution has increased substantially over the last 20 years. The system is structured in a way that allows, even encourages, farmers to operate at a loss, which maximizes profits further downstream for agribusiness and leaves the public covering the farmers’ losses.

The current U.S. Farm Bill, the omnibus agricultural legislation passed every five years, includes revenue insurance programs that respond to price drops, but they are not designed to resolve them. They compensate farmers to some degree for the catastrophic drop in farm prices, even as costs have continued to rise. They do nothing to slow or lessen production. Farm incomes have plummeted for the last three years, and the level of farm debt as a share of farm income is the highest since the 1980s.

The U.S. government’s answer has been to encourage even more exports to compensate for low prices. The value of revenue insurance will also diminish over time as its value is calculated by a moving average of prices that are now, once again, decreasing. The fall in revenue will increase the political pressure on Congress to introduce “emergency measures,” as has happened often in the past. Such financial bail-outs, while providing much needed relief, do nothing to redress the market inequalities between producers on the one hand and farm input companies, grain traders, and processors on the other.

One of the countries hardest hit by unfair competition with U.S. agricultural exports is Mexico. Corn holds an important place in Mexico’s economy, diet, and culture. Under the 1994 North American Free Trade Agreement (NAFTA), U.S. corn exports to Mexico increased more than 400 percent in the first few years, disrupting local markets. Based on Mexican Census data, Tim Wise estimates that more than two million Mexicans left agriculture in the wake of NAFTA’s flood of imports, or as many as one quarter of the farming population. Even when dumping rates decreased during the period of high prices, existing public support programs for agriculture in Mexico, as in the United States, tended to support the largest farmers and agribusiness interests, rather than the smaller producers who had been the backbones of their rural economies.

The Mexican government has responded to the Trump administration’s calls to renegotiate – or abandon – NAFTA by seeking to diversify its sources of corn imports. One proposal in the Mexican Senate calls for the government to cease corn imports from the United States and instead purchase from Brazil, in effect substituting imports from one set of agribusinesses to another.

The big grain traders have also profited from new technologies, such as the computer-driven high frequency trading that now dominates financial markets and has amplified commodity price swings. These firms are in the business of adding value to primary commodities, whether they are fattening animals or turning corn into ethanol. Cheap grain then becomes an input, and the companies are happy to keep those prices low. The structure of those supply chains, as well as the rules that govern them, favor agribusinesses with global reach.

What’s the solution? Several U.S. food and farm groups see the re-opening of the NAFTA debate as an opportunity to challenge the enormous power of the big agribusiness corporations. In early 2017 they issued a call for a different approach to the trade deal — one that allows countries to “protect their farmers from unfair imports that distort the domestic market, undermine prices, and ultimately compromise the economic viability of independent farmers.”

There is an urgent need for a new approach to global trade rules — an approach that respects the obligation on governments to protect food security at home, the complex relationship of food systems to economic development, and the importance of accountability in domestic politics in rich and poor countries alike. Prices must incorporate environmental costs as well and allow for sustainable resource use. It is time for strong, clear rules that value more equitable returns to food production and distribution throughout the supply chain, as well as stable and predictable food prices.

Sophia Murphy is a senior advisor at the Institute for Agriculture and Trade Policy and a PhD candidate at the University of British Columbia, Canada. Karen Hansen-Kuhn directs IATP’s Trade and Global Governance program. IATP promotes fair and sustainable food, farm, and trade systems.

In this interview with the Real News Network, Sophia Murphy of the Institute for Agriculture and Trade Policy explains the inequities in global agriculture.

Pakistan is the latest to start withdrawing from international treaties that give corporations the power to sue governments over environmental and public interest regulations.

Wealthy corporations may use trade courts to keep public health measures from cutting into their profits.

On Health Care and So Much More, the Nordics Show that Equality Works

Keeping the Wealthy Healthy — and Everyone Else Waiting