Several decades ago, I took on an enormous challenge. The United Electrical Workers (UE), one of the most progressive unions in the United States, invited me to accept the newly created position of Director of International Affairs. It was an opportunity to develop a new approach to international work, grounded in the UE’s rank-and-file perspective and centered on organizing.

With increasing job loss to Mexico and the debate over the North American Free Trade Agreement in the early 1990s, the UE leadership had become convinced that the union needed to find a labor organization it could work with in Mexico and had entered into an alliance with the Frente Auténtico del Trabajo (FAT).

My new book, International Solidarity in Action, tells the story of that partnership from my perspective, while incorporating stories and reflections from numerous workers who contributed in a variety of ways. The range of work our Strategic Organizing Alliance undertook included organizing campaigns and filing the first complaints under the NAFTA labor side agreement, along with a subsequent complaint that set the stage for Mexico’s labor law reform.

We also supported worker-to-worker and cultural exchanges, educational events, fundraising, and publicity work. And we forged alliances with a wide variety of unions and other organizations that were striving to create a better world. It was exciting, rewarding, and challenging work that expanded organically and exponentially. 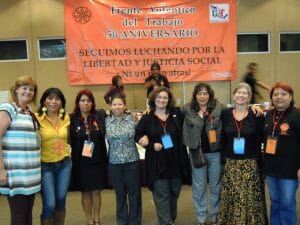 Women leaders of the FAT are joined by international guests in celebrating the FAT’s 50th anniversary, October 2010. Author Robin Alexander is second from right. Photo: UE.

The UE and FAT had a remarkably similar perspective and a commitment to building democratic unions led by rank-and-file workers. The principles that guided our relationship — integrity, mutual respect, communication, and solidarity — are evident throughout our work. Both are also relatively small organizations with limited resources. Yet, the strength of the relationship between UE and FAT was a significant factor in the long fight by Mexican unions and their international allies to remove obstacles to organizing, a fight that led to the stunning victory represented by the progressive Mexican labor law reform that was signed into law in 2019 and went into force last year.

The strong UE-FAT relationship also contributed to the formation and operation of the Tri-National Solidarity Alliance and had a profound impact on each union’s domestic work and on the members and cultures of both of our organizations.

While the book is a historical account, it grapples with international solidarity challenges that are ever more important today. For example, while there is almost universal condemnation of Russia’s military intervention in Ukraine and support for the Ukrainian people, what that solidarity should consist of, or to whom and how it should be offered, are far more complex and controversial.

Much closer to the United States and to the subject matter of the book, in the past few months two groups of industrial workers in Mexico have won major election victories at General Motors and Tridonex plants, defeating the type of “charro” unions historically known for their corruption in favor of new, democratic alternatives.

In both cases, international solidarity and complaints filed under the much-improved successor to NAFTA’s side agreement were significant factors. Unfortunately, however, most of the U.S. press as well as some trade unionists appeared to ignore the central role of the workers themselves and the Mexican organizations that played a vital part in reforming their own labor law and engaging in the organizing work that made those victories possible.

International solidarity is vital, but it is also complicated. In the final pages, I share some reflections about what I have come to believe are essential elements in building meaningful relationships, where possible tying them to examples of the work between UE and FAT.

From the beginning, our relationship was based on mutual respect. There was also frequent communication and clarity about decision-making: the FAT was responsible for final decisions regarding work in Mexico, as the UE was for work in the United States. As our work developed, we tried to always do things in a bi-lateral way, both in terms of supporting each other’s organizing work as well as with all of our educational and cultural exchanges. 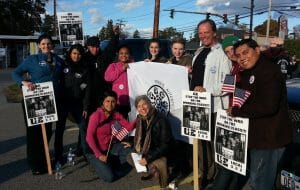 Many elements are vital, among them a willingness to listen and to learn, and the ability to recognize and question assumptions we may make about people, cultures or movements that are different. I believe that relationships take time to develop and for trust to exist we must criticize gently and have the humility to acknowledge mistakes.

One of the most important reflections I offer is that there is a profound chasm between solidarity and charity, and it is essential to understand the difference. In that context, it is imperative to think about all of the resources that we collectively bring to an alliance or struggle and consider economic resources as only one element among many — and really mean it. Too often it is assumed that organizations that provide resources have the right to make decisions, irrespective of whether they have the knowledge or experience with which to do so.

My intention was to offer an account that would provide sufficient detail about what we did and how we went about it that it would prove useful. I hope some of my experiences in building international solidarity from a rank-and-file perspective will furnish some ideas, insights, and perhaps tools to a younger generation of workers, labor activists, and others who are interested in connecting across borders.

Robin Alexander was Director of International Affairs for the United Electrical Workers (UE). Her new e-book, International Solidarity in Action, is available at: InternationalSolidarityInAction.org.

The NLRB Needs Funding – And Congress Needs To Deliver It