Before Celebrating Sinn Féin Election Surge, Consider Their Pro-Austerity Record in the North of Ireland

For over two decades, the party has shared power in the North of Ireland, where it has widened the gaps between rich and poor.

Less than a day after polls closed in the Republic of Ireland, the media proclaimed “a revolution at the ballot box” and “a political earthquake” in the form of a record surge for Sinn Féin, especially among young voters. With ballot counting in the country’s Single Transferrable Vote system still under way, initial results point to a rejection of the longstanding dominance of the center-right parties Fine Gael and Fiánna Fail. It was, pundits have said, a progressive “vote for change” by voters who cited housing, homelessness, and health as key concerns.

But in the North of Ireland, where Sinn Féin has shared power with the Democratic Unionist Party for over two decades, it has been anything but a progressive force.

It has been nearly 22 years since the signing of the Good Friday Agreement marked the end of decades of conflict in the North, and a devolved administration was created in which the nationalist, traditionally Catholic Sinn Féin and the loyalist, traditionally Protestant DUP shared power. But years after the province’s economy was famously thrown “open for business,” the “peace dividend” it promised remains unfulfilled. During 30 bloody years of the Troubles, 3,600 people were killed. Since then, in the shadow of high unemployment, austerity, and institutionalized segregation, some 4,700 people have killed themselves.

Sinn Féin, the de facto political wing of the Irish Republican Army during the Troubles, began in 1905 as a socialist “party of the people,” but since it has come to power, its concern for the communities it represents is hard to discern. The Sinn Féin stronghold of West Belfast is a sobering example. According to a 2018 UN report, it has the second highest rate of child poverty across the whole of Britain, including Scotland, England, and Wales. It is one of the greatest areas of housing need across the North, has its highest levels of intergenerational unemployment, and extremely poor levels of mental health well-being.

Meanwhile, Sinn Féin’s position in the political establishment has become ever more secure – and for some, more profitable. In recent years, elected representatives of the party have been implicated in political scandals in everything from housing and “bad banks” to failed renewable energy schemes, with charges of diversion of funds and silencing of whistle-blowers at the same time as public services have been starved of resources.

Since the introduction of austerity policies in 2010 by Britain’s government, Sinn Féin has had numerous opportunities to use official “motions of concern” to block, delay, or mitigate the impact of these policies in the North of Ireland — but time and again, they have chosen not to. 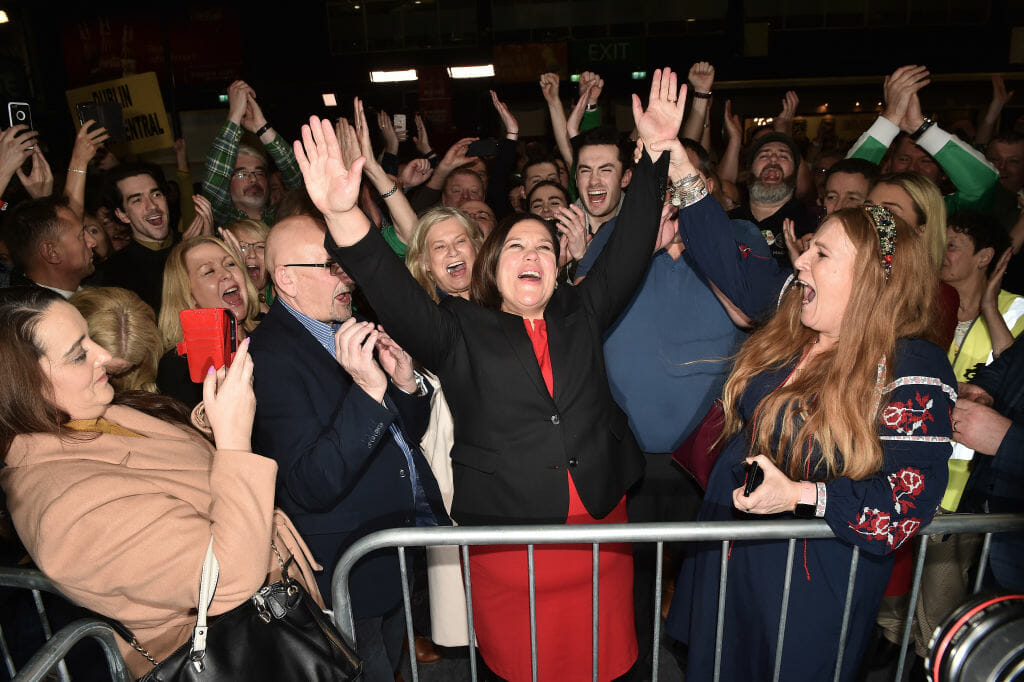 In January 2017, just as communities in the North of Ireland were starting to feel the effects of Britain’s punishing Welfare Reform 2015 act, Sinn Féin and the DUP brought about the collapse of the Northern Ireland Assembly, which remained shuttered until January 2020. The closure was a convenient smokescreen while austerity was falling heavily on the ground in a shrinking welfare state marked by growing numbers of insecure zero-hour-contract jobs and rising housing insecurity.

Few people outside the North of Ireland – even those queueing up to vote across the border in the Republic – understand what living in institutional sectarianism looks and feels like. In today’s Belfast, there are over 100 “peace walls” separating streets and communities — and, shockingly, more of them have been erected since the Peace Process than during the Troubles.

Some 96 percent of the province’s schools remain segregated on religious lines, and many young people grow up having never met a peer from “the other side.” Over 94 percent of social housing is still divided along religious lines: the effect of this is the maintenance of strict sectarian divisions for working-class citizens, while middle-class and wealthy citizens who are able to choose where they live tend to opt for peaceful suburbs far away from still-volatile “interface” zones, and tend to favor “Why can’t we all just move on?” pieties.

This ongoing segregation is not accidental. Both Sinn Fein and the DUP use tribal politics to preserve their own political interests, reliant for their power on young people growing up with a siege mentality and a fear of the community on the other side of the wall. In a supposed age of peace, sectarian politics are still used to distract communities from the social issues that affect everyone in the North of Ireland, Catholic and Protestant alike.

Many in the South of Ireland who voted for Sinn Féin over concern for housing issues may not know just how concerning is its record on this issue in the North. With well over 23,000 people under the age of 18 in Belfast on record as “in housing distress” (from sofa-surfing to street homelessness), Sinn Féin has supported a new “City Deal” that will markedly ramp up the privatization of publically owned land in inner city communities, all of it land previously set aside for the building of social housing.

In March 2019, Deirdre Hargey, now the Sinn Fein Minster for Communities in the Northern Ireland Executive and then Lord Mayor of Belfast, called the City Deal “an investment which will improve quality of life for people living here and further enhance our attractiveness as a destination of choice for investors, visitors, new residents and students alike.” Her statement shows where Sinn Féin’s priorities lie: as the largest political party in a city with a multitude of social ills, it is more concerned with Belfast’s attractiveness to investors, new residents and students than with the living conditions of its residents.

Claims of a “revolution at the ballot box” in Ireland’s elections are far from the mark: hyperbole on the part of journalists and misplaced hope on the part of voters looking for change. Neoliberal at heart, opportunistic in methods, self-interested in power, Sinn Féin, if it were to form a government in the Republic of Ireland, would be no more likely to deliver on progressive promises made to the 26 counties of the South than it has in 22 years in the six counties of the North. Its guiding principle has been self-interest, heedless of its impact on the ever-greater gap between Ireland’s haves and have nots.

Michaela Rafferty is a 2019-20 Atlantic Fellow for Social and Economic Equity with 12 years of experience as a youth and community worker in Belfast, most recently at Springboard Opportunities, which provides services, training and advocacy to young people in the city. Follow her at @MichaelaRaffert.

by Anastasia Christman and Brian Chen