The PRO Act, which offers a pathway to increased power for the working class, passed the House with bipartisan support.

by Anastasia Christman and Brian Chen

For years, workers have been sounding a clarion call to those in power: they’re tired of being left behind in an allegedly booming economy. Hundreds of thousands are taking to the streets and flooding statehouses to demand better working conditions, and by extension, stronger communities.

The number of workers walking off the job to achieve a more equitable economy is greater than at any time since the mid-1980s. These workers, to paraphrase Martin Luther King, Jr., are modelling the power and importance of collective action and democratic principles — and in so doing, “enlarging the strength of the nation.”

On February 6, the U.S. House of Representatives took a major step to recognize and advance workers’ hard-fought efforts by voting 224-194 to pass with bipartisan support the Protecting the Right to Organize (PRO) Act.

A landmark bill that would dramatically reform federal labor laws, the PRO Act strengthens workers’ ability to unionize and collectively bargain for a contract; imposes stronger remedies when employers interfere with workers’ rights; and cracks down on employers’ ability to mislabel their workers as contractors and therefore deny them the opportunity to organize under federal law. 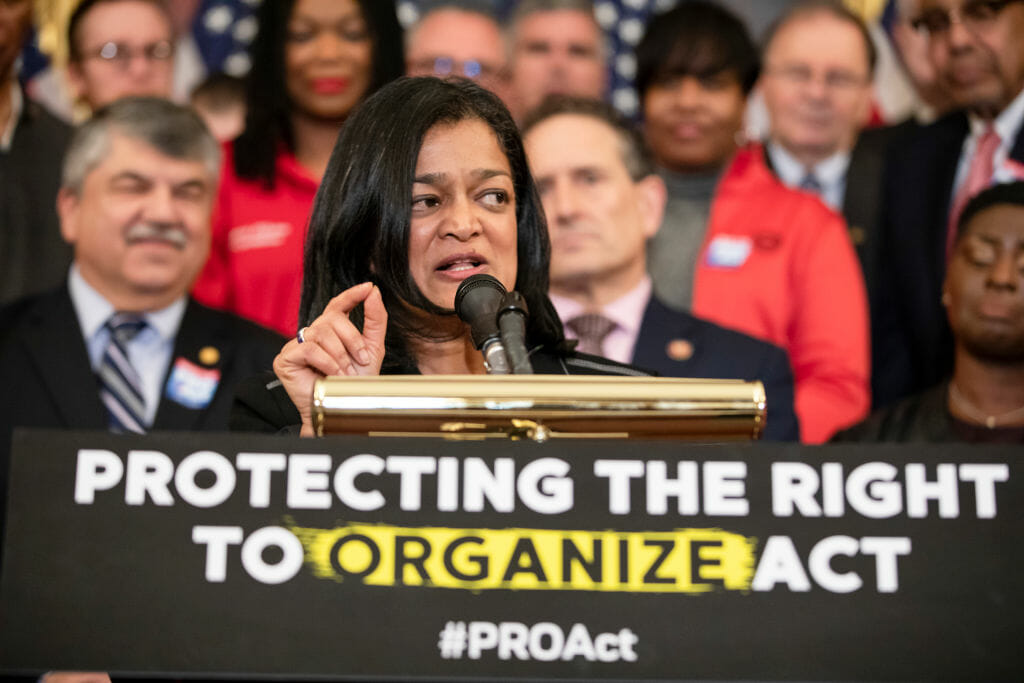 It is a fundamental right for working people to join together to collectively bargain for fair pay and working conditions. Union jobs pay, on average, 16 percent higher wages than non-union jobs because workers can bargain collectively for higher pay and transparent hiring and promotion policies. Unions are crucial in fostering a vibrant middle class and reducing income inequality.

Unions also help to combat racial wealth gaps. Unionized Black workers, for example, receive significantly higher wages than their non-union counterparts (by 19 percent), and have a markedly higher chance of getting an employer-sponsored retirement plan (by 15 percent) and employer-provided health insurance (by 13 percent). Had unionization rates stayed at the 1970s rate, some estimate that Black-white weekly wage gaps would be nearly 30 percent lower among women and 4 percent lower among men.

Even still, powerful corporations and their well-paid lobbyists have worked for decades to pull the wool over lawmakers’ eyes. It’s getting harder, however, to ignore workers’ collective action when thousands of fast-food and hotel workers take to the streets to protest the dangers and indignity of sexual harassment and workplace violence.

Workers who have been dispossessed of their rights and protections by employers cheating the system are demanding that companies quit pretending that they’re independent contractors. Public school teachers across the country are fighting for increased health care staff, more librarians, smaller class sizes, and supports for homeless students, not just for their own well-being but to dramatically improve our nation’s education system.

By passing the PRO Act, House lawmakers have heeded the call from workers across the country. If, as some expect, the Senate will not take up the bill, at least some in our nation’s capital have shown they value protecting workplace democracy for all of us.

Still, to prognosticate over whether the bill will be signed into law — in 2020, 2021, or beyond — is to miss an important point. The PRO Act stands as a testament to labor’s repudiation of a half-century of trickle-down neoliberalism, concentration of capital, and politics of austerity.

Workers are increasingly standing up against a vicious system of chronic insecurity and atomization, a pattern of activism that’s only likely to grow as workers learn from one another and as others see how collective activity improves entire communities. With this bill, lawmakers are just catching up to the moment.

Anastasia Christman is the Worker Power Program Director and Brian Chen is a Staff Attorney for the National Employment Law Project.

Before Celebrating Sinn Féin Election Surge, Consider Their Pro-Austerity Record in the North of Ireland

Regulator Slaps Wells Fargo CEO With Biggest Fine Ever. It's Still Not Enough.