Following the Footsteps of a Mining Monster

The metaphor of “a big monster that treads heavily” has been used to describe war in a song famously sung by Mercedes Sosa. It has also been applied to the mining of metals, such as gold and silver, given the industry’s track record of serious and long-lasting impacts.

These impacts are laid bare in an online map that traces the steps of Pan American Silver, one of the world´s largest silver mining companies, based in Vancouver, Canada. The picture isn’t pretty.

From Mexico to Argentina, communities in the company’s path have suffered forced displacement, environmental contamination and disregard for local self-determination. When communities have taken stands to protect their land, water, health, and livelihoods, they have often been met with violence and intimidation from private security or state forces. In some cases, Pan American was in charge when communities were aggrieved and in other cases, it is profiting from earlier repression.

This map was developed in collaboration with the research team at EJAtlas, MiningWatch Canada, Earthworks, the Institute of Political Studies-Global Economy Program, the Zacatecas Observatory of Mining Conflicts, and the Mexican Network of Mining Affected People, among others. The eight mines documented in this map join more than 600 other environmental conflicts documented by EJAtlas related to resource extraction. It is an important resource for community organizing, mapping, and for illustrating the extent of environmental and social conflicts over extraction projects that in many cases, are being imposed without the consent of affected communities. 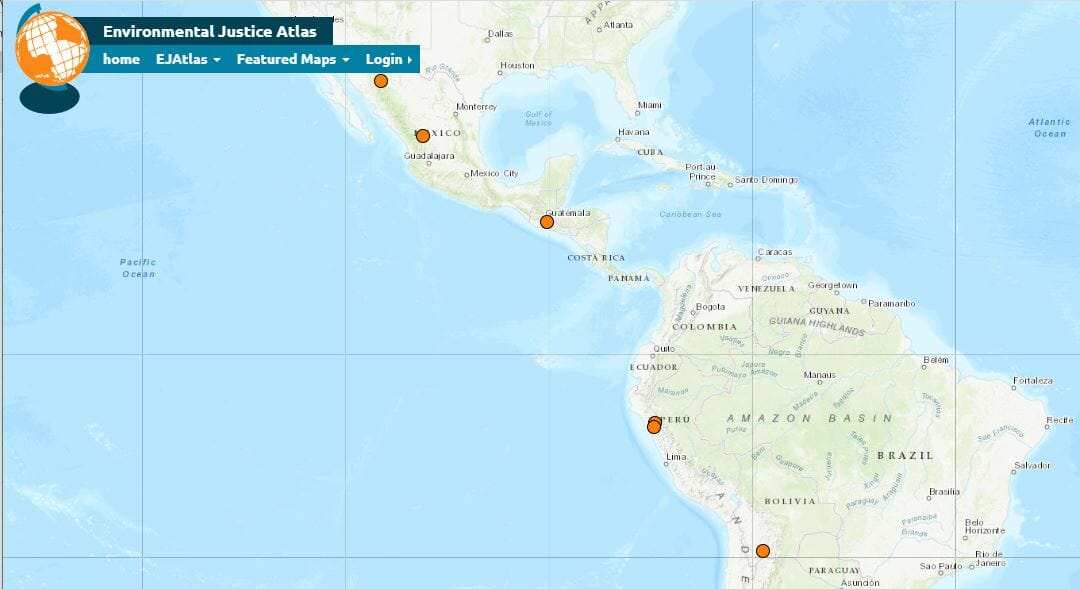 Pan American Silver got started in northern Peru, operating the Quiruvilca mine from 1995 to 2012, during which time the company reportedly received 22 environmental fines. The Peruvian press recently called this mine a “time bomb” of environmental contamination.

Pan American sold the mine to Southern Peaks Mining in 2012, at which point Pan American´s then-CEO said that he was confident the new company would take care of workers and communities. But the mine was abandoned in 2017, and since then, the government has issued five environmental emergency declarations given the levels of heavy metal contamination in the Moche river related to acid mine drainage from the mine (which started before Southern Peaks took over), as well as the instability of its tailing impoundments.

More recently, Pan American participated in an assault on environmental enforcement in Peru, bringing a lawsuit against annual payments to support the Assessment and Environmental Control Agency.

Today, Pan American´s largest silver mine is the La Colorada mine in Zacatecas, Mexico.

Between 2014-2017, in order to expand the mine, the company’s private security guards forced the local community out of their homes and off their land. Heavy machinery was used to destroy their houses, either partially or completely. The community now lives in a housing unit owned by the company, which sets quiet hours, writes the rules for use of the church, and even decides what kind of pets residents can have. Residents are also concerned about their close proximity to the mine, given possible impacts on their health. Despite these conditions, the community continues to fight for recognition of its land rights.

The company has another large operation, the Dolores open-pit gold mine located in Chihuahua, Mexico, a region with extraordinary levels of violence due to a battle between organized crime groups for territorial control and a militarized response from the state. Shortly before Pan American purchased the project in 2012, local protests over economic and environmental issues were undermined with the support of state armed forces. This is illustrative of how militarization, which took place in the name of the so-called War on Drugs, has enabled mining investment to expand in such areas and worked against mining-affected communities, as journalist Dawn Paley has documented.

Mining Corps Have a Friend in New Guatemalan Government

Where Pan American is Trying to Go

The mining projects that Pan American Silver has not managed to exploit also leave distinct imprints.

In 2009, the company acquired the Navidad project in the province of Chubut, Argentina, despite a province-wide ban on open-pit mining and the use of cyanide since 2004. These important environmental protections were achieved after significant organizing efforts of local environmental assemblies. The assemblies hold monthly marches and, in 2014, over 17,000 Chubut citizens signed a proposed legislative initiative to reinforce the mining ban.

The population is concerned about the potential impact of large-scale mining on the Sacanana watershed and underground aquifers. These assemblies now denounce the company for trying to lobby local, provincial and national authorities to modify or entirely scrap this legislation in order to exploit the silver deposit.

Ten years after Pan American Silver bought Navidad, the company acquired another stalled and unwanted project in Guatemala: the Escobal silver mine in southeastern Guatemala.

Between 2010-2013, faced with broad-based peaceful resistance, the state and then-owner of the mine, Tahoe Resources, violently repressed the population, in order to open the mine. Escobal operated until mid-2017, when local residents blocked access to the mine and the court suspended operations over discrimination and lack of consultation with the Xinka Indigenous people. The Xinka have denounced the new consultation process as discriminatory and illegal.

While Pan American has claimed to be better than its predecessor, Tahoe Resources, communities in Guatemala have much to gain from tracing Pan American´s own track record in order to inform their decisions moving forward.