With a poverty rate at 22 percent, the LGBTQ+ community needs more than rainbow flag avatars on social media from multi-million dollar corporations.

It’s difficult to forget that June is Pride Month: not just because of the marches, celebrations, and commemorations of the liberatory Stonewall Riots, but because of the rainbows.

Akin to the massive “Christmasification” stores undergo each December 1st, June 1st brings a wave of rainbows, Pride flags of varying shades, and, of course, the phrase “Love is Love” in every font, color, and style imaginable. Corporations and organizations of all stripes – from Pfizer to Bud Light – attempt to express allyship by covering their logos in rainbows. Even the U.S. Marines shared an image of rainbow bullets strapped to a camouflage helmet. This phenomenon — corporate incorporation of historically LGBTQ+ symbols and ideals into their products, hoping to attract consumers within the community — is known among advocates and organizers as “rainbow capitalism” or “pinkwashing.”

To an LGBTQ+ community that has a national poverty rate of 22 percent (compared to 16 percent  of cis straight people), rainbow capitalism is a slap in the face — a way for corporations to reap the benefits of queer allyship without spearheading initiatives or promoting tangible policies that will have a positive impact on the community.

The historical marginalization of queer folks have led to systemic disparities in income and livelihood. For every dollar a typical worker owns, LGBTQ+ workers earn between four and 40 cents less, depending on their race and gender identities. Compared to the national poverty rate of 12 percent in 2015, transgender Americans had a national poverty rate of more than double at 29 percent in 2015. Transgender people of color suffer even worse poverty rates, with 43 percent of Latino, 41 percent of Native American, 40 percent of multiracial, and 38 percent of Black transgender people living in poverty.

Defenders of pinkwashing argue that it creates mainstream visibility of the LGBTQ+ community, which is particularly important for closeted people in more conservative areas. But considering these disparities, we cannot allow corporations to become complacent with superficial allyship that ultimately only benefits them. A solution to the issue facing corporations each June, advocates argue, is the practice of redistribution: redirecting wealth from those who don’t need it to those who do, and empowering organizations that support and uplift the LGBTQ+ community directly.

In New York City, Gabrielle Lenart observed a lack of space available for queer people in food – and wanted to build a more supportive, sustainable community. In response, she founded the Queer Food Foundation, a community-based organization working to uplift and create resources for queer folks in the food industry. Their past and present projects include the Queer Food Database, a database resource for queer people in the food industry who want to connect with one another, and the Queer Food Fund: a mutual aid program designed to provide assistance to Black, queer, and trans folks facing food insecurity.

Lenart and fellow board member Radhika Sharma observed a lack of visibility and conversation on the intersection of queerness and the food industry, which is extremely hierarchical and rigid regarding identity.

“There is a long history of queer people gathering around food and creating spaces of safety,” Sharma told Inequality.org in an interview. “In our work, we’re trying to reject systems of oppression that tell us that we’re supposed to feel or eat a certain way or only give value to certain kinds of foods and people. Being able to have spaces where, regardless of if you know people, can feel safe and want to connect, using queerness as a way of navigating the world. I want to create and protect that as much as possible.” 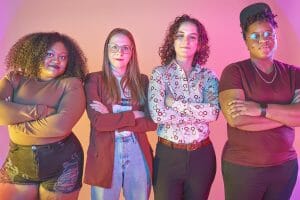 “It seems like people only care about us during June and they don’t wanna actually do the work, they just want to be recognized for caring, especially corporations,” Sharma said. “Like, no: we are queer 365 days a year, we work for the community 365 days a year, and you’re not just going to tokenize us and use us for performative allyship when there are  things that need to change, legislation that needs to be done, and funds that need to be raised on a daily basis.”

When corporations do choose to support Pride-related causes, they tend to endorse well-established philanthropic interventions over transformative aid. Over 20 different organizations have partnered with the Trevor Project this year. While the Trevor Project has undeniably done incredible work for the queer community that shouldn’t be discounted, their status as a queer-centered mental health organization renders them exactly the kind of organization that businesses are happy to champion. Corporations love to showcase that they’re “saving LGBT+ lives” in the abstract, but never translate that support into mutual aid and survival efforts for LGBTQ+ communities, which are far more restorative and transformative for real queer folks. This may be one reason why numerous major firms that purportedly celebrate Pride, including Home Depot and AT&T,  have donated roughly $1 million or more each to anti-LGBTQ+ politicians.

While dismayed by the traditionally narrow focus of corporate Pride donations, Lennart and Sharma were willing to partner with organizations that showed an interest in making real change.

“One thing about our culture in general is that we don’t see instances of being able to publicly educate or publicly change and accept change – and that’s something that we as an organization really want to support,” Lennart said.“If you’re showing us that you’re changing or that you’re putting in the work, we absolutely want to support transformation and change.”

Through their work, Queer Food Foundation has given a platform to over 100 folks and organizations, distributed over 90 grants to Black queer folks impacted by food insecurity, and organized several events, including a recent  in-person fundraiser where they were able to cover admission fees for lower-income members of the community. They’ve been recognized by authorities in the food industry including Better Homes and Gardens and Food Tank, and have partnered with organizations including the Museum of Food and Drink and the James Beard Foundation.

If corporations truly want to show commitment to LGBTQ+ rights, they need to put their money where their mouth is. Considering that Pride-themed merchandise functions to commodify LGBTQ+ identities, it only makes sense that the community corporations profit from should receive a majority of the proceeds. If a company puts a rainbow flag on their products, it shouldn’t donate just 10 percent back: the full amount should return to the community. It’s not impossible:  some retailers, like American Eagle and Nordstrom, have pledged 100 percent of their Pride clothing earnings to advocacy groups and local charities.

And while the moral implications of accepting money from corporations may seem spurious, “getting money away from people who have resources and redistributing it to people who don’t is the ultimate goal,” said Sharma.

Let’s hope that when June 1st rolls around again next year, corporations spend more money on tangibly supporting LGBTQ+ community causes than they do time on adding rainbows to their logos.

Tapti Sen is an Inequality.org Next Leader at the Institute for Policy Studies.

With a poverty rate at 22 percent, the LGBTQ+ community needs more than rainbow flag avatars on social media from multi-million dollar corporations.

Do You Need Luck To Get Really Rich?