Washington DC, November 30, 2017. Protesters gathered at The Capitol for The People's Filibuster against the Trump Tax Bill. Credit: Susan Melkisethian.

In the two years since Congress passed the Republican tax law, the richest 1 percent have been the big winners.

Republicans repeatedly promised in 2017 that their proposed tax cuts for the wealthy and corporations would increase jobs, pay for themselves, give every family a big raise and would really hurt rich people like Donald Trump.

Two years after passage of this $1.9 trillion tax plan — officially named the Tax Cuts and Jobs Act (TCJA) — a new report by Americans for Tax Fairness catalogues the eight major GOP predictions about the benefits of the legislation and shows how each of those promises (ahem, lies) have proven false.

A big reason benefits are tilted to the top is the law slashed the U.S. corporate tax rate on domestic profits from 35 percent to 21 percent and on foreign profits to about 10 percent. Wealthy people own most corporate stock.

Within the Fortune 500, 91 profitable corporations—such as Amazon, FedEx, Netflix and General Motors—paid no U.S. corporate income taxes in 2018, according to the Institute on Taxation and Economic Policy. And 379 profitable Fortune 500 corporations paid just an 11.3 percent tax rate last year. That’s about half the rate established under Trump’s tax law, which slashed the previous rate by 40 percent.

President Trump and his family will benefit personally by millions of dollars from at least five features of the law: lower top income tax rates; the deep corporate tax cuts; a weakened estate tax; a tax break mostly benefiting wealthy business owners like Trump (see below); and real-estate loopholes the law opened.

Median family income grew by just $514 in 2018 after enactment of the tax law—much slower growth than occurred in each of the last three years under President Obama. The increase in the yearly wage growth rate is up just 0.4 percent over the roughly two years since the Trump-GOP tax law was enacted. The yearly wage growth rate under Obama’s last two years accelerated by 0.7 percent.

Almost half the benefits of this supposed “small” business tax cut are going to the tiny sliver of businesses with over $1 million in annual income. Less than a quarter is going to firms with income of $200,000 or less.

Economic growth (GDP) since the tax law was enacted has been in line with the Obama years. Growth hasn’t hit 3 percent under Trump, and growth during the first three quarters of 2019 is averaging 2.4 percent. The Federal Reserve predicts growth of 2.2 percent for the full year.

The total cost of the tax cuts is estimated at $1.9 trillion, according to the Congressional Budget Office, which will be added to the national debt. Conservatives claimed the law’s lower tax rates would raise a lot more revenue through greater economic activity. But largely due to the tax cuts (especially for corporations), the deficit has exploded, reaching nearly $1 trillion in 2019, up more than 70 percent from the $585 billion during Obama’s last year in office. 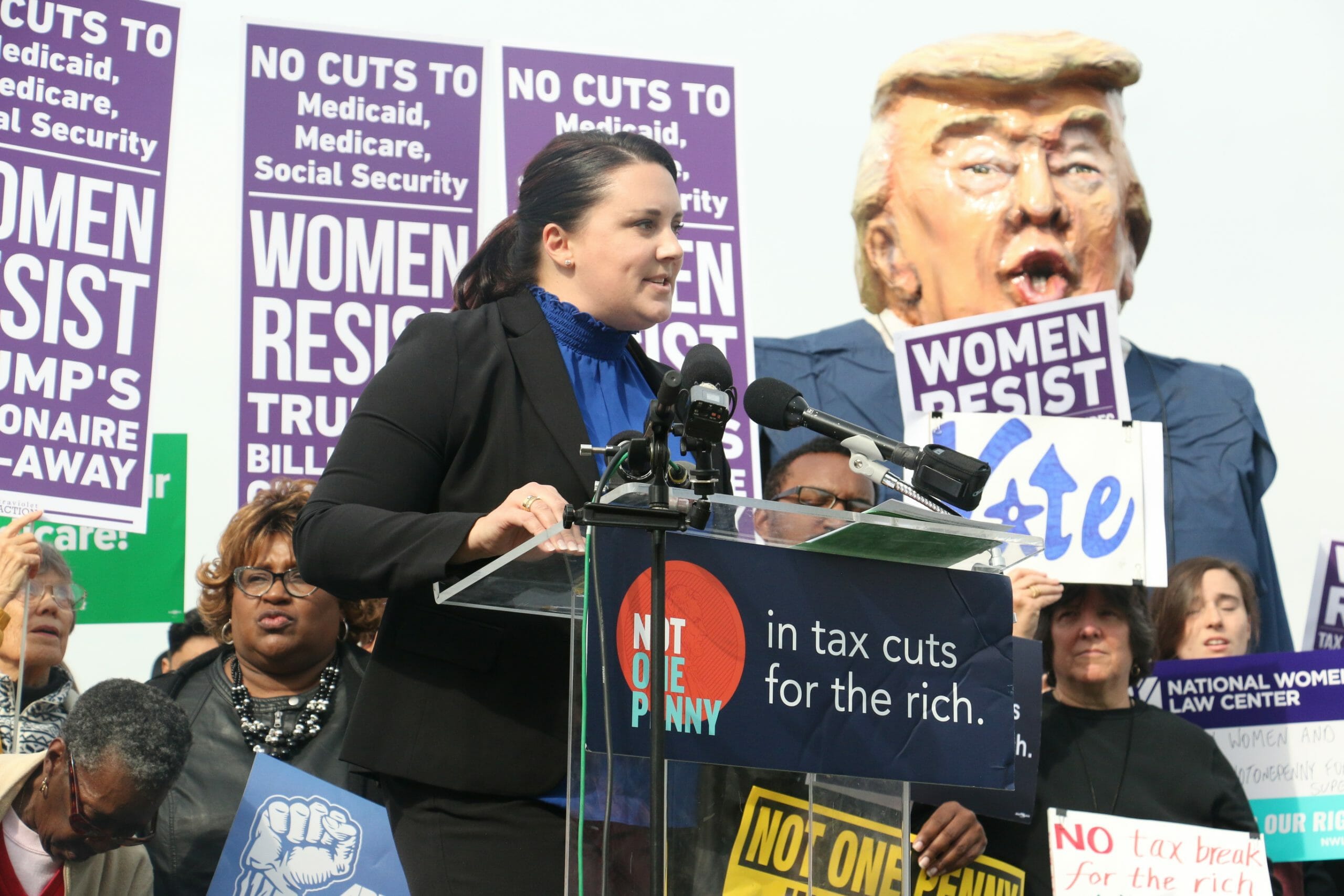 Kansas activist Sarah LaFrenz, warning of the disastrous impacts of deep tax cuts on corporations in her state at a Washington, D.C. rally before the 2017 congressional vote on the GOP tax plan. Credit: Sarah Anderson.

Monthly job growth has averaged 202,000 in the two years since the tax cuts were enacted. Job growth in the last two years of the Obama Administration averaged 210,000 a month.

After just one-quarter of modest growth in 2018, capital investment has declined overall since then, falling into negative territory in the second and third quarters of 2019.

Corporations have instead used their tax savings for stock buybacks, which primarily benefit executives and other wealthy shareholders. Corporations bought back a record $800 billion-plus of their own shares in 2018, an increase of more than 50 percent over the $519 billion in stock buybacks in 2017.

Congress should go beyond repealing the Republican tax plan and embrace innovative new ideas for fair taxation. A previous Americans for Tax Fairness report, Fair Taxes Now: Revenue Options for A Fair Tax System, presents a menu of 40 progressive tax reform options that could raise about $10 trillion, demand the most from those with the most to give, and steer a better economic course for our country than the failed policy of cutting taxes for the wealthy and corporations.

Frank Clemente is the Executive Director of Americans for Tax Fairness, which unites national, state, and local organizations in support of a tax system that works for all Americans.

A Federal Job Guarantee Is a Crucial Tool to Fight Inequality