Leading research and movement organizations and progressive Democrats call for rapid passage of legislation to transform the economy.

Last month, the president unveiled his American Jobs Plan, which requests about $2.3 trillion over eight years to modernize the nation’s infrastructure, with most of the costs to be covered by a corporate tax rate increase.

On April 28, Biden will unveil an American Families Plan, which is expected to include proposals for national child care, pre-K, paid family leave, and tuition-free community college, as well as an extension of the expanded Child Tax Credit.

The approximately $1.8 trillion proposal would be at least partially funded by a set of taxes on the wealthy, including a significant increase in the capital gains rate for individuals earning more than $1 million per year. Biden has also vowed to beef up IRS enforcement of wealthy tax evaders.

Most leading progressives have welcomed Biden’s twin proposals while urging the administration and Congress to go further to meet the magnitude of the current moment.

The Institute for Policy Studies, the Economic Policy Institute, and the Progressive Change Action Fund issued a statement last week calling the Biden proposals “necessary but insufficient in scale and scope.”

These progressive organizations said Biden’s economic plan “must be scaled up,” noting that it “falls short of the $7 trillion President Biden proposed on the campaign trail and well short of the at least $10 trillion over 10 years (3 percent of GDP annually) suggested by many advocates and experts to meet the extent of our country’s needs.”

The statement also urged the administration to go big in his American Families Plan to include “much-needed provisions on paid leave, child care, housing, drug pricing, Medicare expansion, higher education, immigration, unemployment insurance, poverty-reducing tax credits, and taxes on the wealthy — changes that would lead to greater economic security and opportunity for everyone.”

The fight over the size and scope of the legislation is already heating up in Congress.

Congressional Progressive Caucus Chair Pramila Jayapal (D-Wash.) has described Biden’s American Jobs Plan as a “welcome first step” but believes it should be “substantially larger in size and scope.” 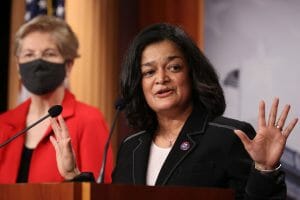 Jayapal also points to Biden’s more ambitious campaign trail commitments, including a $2 trillion accelerated investment over four years on climate-focused infrastructure alone. Biden’s American Jobs Plan would spend just half that amount on a variety of priorities, including a significant investment in home care jobs.

“We believe that our country is ready for an even bolder, more comprehensive and integrated plan that demonstrates the size, scope, and speed required to aggressively slash carbon pollution and avoid climate catastrophe; create millions of good, family-sustaining, union jobs; improve Americans’ health and safety; reduce racial and gender disparities; and curb income inequality by making the wealthy and large corporations finally pay their fair share in taxes,” Jayapal said.

Over on the Senate side, Bernie Sanders (I-Vt.), Ben Cardin (D-Md.), Debbie Stabenow (D-Mich.) and Elizabeth Warren (D-Mass.), led 13 other lawmakers in drafting an April 25 letter to Biden asking for an expansion of Medicare benefits to be included in the American Families Plan.

The lawmakers want to reduce the Medicare eligibility age, expand a cap on out-of-pocket expenses, negotiate lower drug prices, and expand Medicare benefits to include hearing, dental, and vision care.

Sanders and Warren are both pushing ambitious tax proposals that would generate significant revenue but are not yet included on Biden’s proposed revenue-raiser lists. These include a Wall Street speculation tax, a wealth tax, and a tax rate increase on corporations with huge gaps between CEO and worker pay.

Democrats should also consider freeing up resources for human needs by cutting the war budget. IPS and the Poor People’s Campaign have laid out proposals to shave $350 billion from Pentagon spending in ways that would make the country more safe and secure.

Senate Republicans are mounting fierce opposition to proposed tax increases on the rich and corporations while preparing a watered down $600 billion to $800 billion plan that only includes physical infrastructure. To pay for their plan, Republicans would rely on user fees on electric and hydrogen-powered vehicles and pulling back state and local money from the Covid relief plan passed early this year.

Some Senate Democrats are also resisting Biden’s proposal to raise the corporate tax rate from 21 percent to 28 percent, opting instead for a 25 percent hike. If they prevail, this would substantially lower the revenue potential of the White House plan.

In May we’ll likely see House and Senate leadership deciding what moves in bipartisan legislation, if any, and what moves via budget reconciliation, a process that requires only a straight majority for passage in the Senate, instead of 60 votes.

This is a critical moment in our nation’s history. The job for progressives is to demand solutions that truly solve the staggering challenges of our time and that leave no one behind. Families and communities recovering from the Covid-19 pandemic need fast and bold action. Congress and the White House need to deliver.

John Cavanagh is Director and Sarah Anderson is Global Economy Director at the Institute for Policy Studies.

Impact Investing: A Ruse? Or a Meaningful Tool in Reducing Inequality?