Machinist Daniel Wasik on Respect for the Working Class

Working people deserve a better standard of living for completing what society demands.

Daniel Wasik is a machinist living in a small New Jersey town.  He grew up in Canton, Ohio. He became alarmed about growing US inequality and started to write songs about it, including “Who Has to Wonder.”

In January, he wrote a letter to The New York Times about lack of respect for the working class. He spoke with Chuck Collins at Inequality.org about what motivates him.

How did you get into singing and writing about inequality?

I grew up in Canton, Ohio. My dad was a tool and die maker and I later became a skilled machinist. But, the jobs available to me as a young man – working in fast food, bagging groceries – were crowded out by 60-year-olds who used to work in the factories.

I see people’s lives getting harder and harder.  There are people doing work that everyone needs but their labor is so undervalued.

Working people deserve a better standard of living for completing what society demands.  And there is value in people’s time and effort, regardless of their education level.  It is fine that some people make more money than others.  It is the level of disparity that is the problem.

How do you see inequality around you?

Overall, our society is becoming more and more divided between the haves and have-nots. Resources and educational quality pool into increasingly exclusive and homogeneous zip codes, while opportunity and possibility drain from increasingly segregated working class communities.

I see people whose standard of living is being chipped away from all sides. My health care deductible goes up so you have to come up with $500 at the beginning of the year to see a doctor.

I see people working two or three jobs who literally are choosing between medicine and food. In a lot of workplaces, even a whisper of organizing a union will get you fired.

I fortunately work in a small machine shop and have a great employer. But I feel these stresses.  Job security has disappeared. 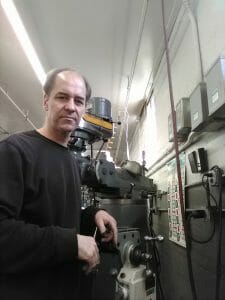 I once lived in Big Sur, California, and worked at a store where a lot of wealthy and famous people came in. I talked to Trump and Ted Turner a few times and movie stars. Even those who were nice were so removed from the world that most working people live in.

And yet these are the wealthy who write the rules – and there seems to be no limit to how much of our society’s wealth they will take. It is like a moth to the flame – they can’t stop themselves from lobbying to get rid of the estate tax or squeezing workers.

How can this change?

Working people need a larger voice in our democracy, but most don’t have the time. They can’t spare the attention. They are struggling to survive. It is almost impossible to see beyond the next month’s bills, let alone the next election cycle. They are invisible and there are powerful people who want to keep them that way. I just think they should have a fighting chance.

Government should advocate for everyone. Too many policymakers are rich politicians with rich corporate advisors.  We don’t need politicians to visit working class neighborhoods when they are running for office. We need more people from the working class bringing their voice to Washington, where the policy is being made.

You write about lack of respect for working people and the work they do.  What happens when politicians are disconnected from working class people?

In today’s conversation, people talk about the white working class.  Let’s not forget the working class is also full of minorities and immigrants.

The right wing scapegoats immigrants and the left caricatures the white working class as Trump-supporting racists. I’m surrounded by people who voted for Trump  who are not racist bigots. They are just fed up with the mainstream of both parties.

Would you recommend your children go into the trades?

Probably not. For all the downsides of student loans, etc. I think there is more security in having a degree. This makes me sad, however, because I am a craftsman and there is just something very satisfying in creating objects, incredibly complex and beautiful, with your hands and your head.

What keeps you going?

My kids keep me going. I worry about the world of their future.  I see how long term inequality is pushing people to revolt. But it might be the wrong kind of revolt, the kind that gets people like Trump elected.

At the end of the day it is really an issue of basic fairness. People deserve some dignity for completing the work that society demands, a reasonable quality of life for what they contribute to our common good, and a fundamental understanding that all work has value and deserves respect.