A Nevada-based mining firm is suing Guatemala for more than $400 million, the first suit of its kind for the impoverished Central American country.

The company complains that the Guatemalan government didn’t do enough to protect its investments in the country. But that’s news to my community and others who faced violent police repression when we nonviolently demonstrated to keep these mining operations from poisoning our health and water.

The firm, Kappes, Cassiday & Associates (KCA), filed its case at a little-known branch of the World Bank called the International Center for Settlement of Investment Disputes (ICSID).

The Central America-Dominican Republic Free Trade Agreement, which Guatemala entered into with the United States in 2006, enables U.S. corporations to sue governments in this forum not only for the alleged loss of company investments, but also for the loss of supposed future profits. Some 80 percent of the $400 million KCA claims to have lost is based on estimates of future earnings from exploration activities that it never carried out. 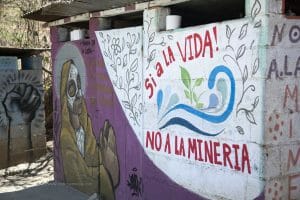 My recently published analysis of this case lays out how supranational arbitration cases like this, which are uniquely available to transnational companies through trade and investment agreements, ignore community resistance and the violence we face.

The option to simply sue governments provides a perverse disincentive for companies to respect the law — and encourages wild speculation on future lost profits even when investments fail. If the suit succeeds, it will also deprive Guatemalans of millions of dollars in scarce funds that could be much better used to attend to basic needs of the population, disasters provoked by the climate crisis, and to stem the flow of forced out-migration.

These suits show no regard for the concerns of the people most directly affected by company operations.

Our movement at La Puya has presented extensive evidence over the years of how KCA’s gold project would lead to water depletion and contamination putting our health at risk. From the outset, the mine faced stiff opposition from our communities living near the project just north of Guatemala City. Since then, our communities have maintained a round-the-clock protest camp in front of the road to the mine site for over 10 years.

As a result, we have faced threats, targeted violence, legal persecution, police repression, and acts of intimidation. In fact, the project was only able to operate after harsh police repression against the movement cleared the way for equipment on several occasions, even injuring people. However, the gold mine only operated for two years, until the courts suspended the project in late 2015 over failure to adequately consult with us.

In response to KCA’s claim, the Guatemalan government has argued that the company relied on government favors to obtain its environmental license. It cites communications between KCA President Daniel Kappes and then Director General of Mining Selvyn Morales in 2011, in which Kappes wrote, “I am much more comfortable that you are involved and can help us to keep the permitting process moving forward so that we can get the permits before politics intrudes too heavily.” Shortly after this exchange, Morales left the government to work for a mining services company, which KCA immediately hired.

Guatemala built much of its legal defense on the documentation, arguments, and studies that we developed over years of struggle with support from allied technicians, lawyers, and organizations. For example, Guatemala’s legal defense points to KCA’s woefully deficient environmental impact study that even the government concedes should have never been approved. It also highlights the company’s violation of environmental norms and its failure to obtain a construction license to build the mine.

The government’s lawyers even called community members to testify before the arbitration tribunal.

The mining industry thought they could steamroll local opposition. But the government isn’t much better.

The government’s defense effectively legitimizes the reasons underpinning our decade-long struggle. However, although it uses our arguments and evidence to try to avoid paying the company, it has still not shown a willingness to respect our rights to decide over a project that so profoundly affects our land and lives.

In June of this year, the consultation process ordered by the Constitutional Court began under the management of the Ministry of Energy and Mines (MEM). So far, the government has demonstrated little interest in involving the most directly affected communities living in the immediate vicinity of the mine.

The ministry’s actions run contrary to the government’s own arguments presented to the arbitration tribunal, in which it underscores local discontent over the project. It criticizes KCA’s for only ever achieving 6 percent credibility with the population as of 2014 when it entered into operation, according to a survey commissioned by KCA.

Rather than seek to consult our communities, the Guatemalan government alleges in the arbitration proceedings that the company tried to buy off key people to gain a local foothold: “They made direct payments to community and municipal leaders” and “paid people them to participate in capacity building sessions,” the government says.

Furthermore, Guatemalan authorities criticize KCA’s claim that it “consulted” with communities through interviews with municipal and village-level public councils, which cannot be presumed to be representative of Indigenous peoples.

Nonetheless, the Ministry of Energy and Mines is now repeating some similar tactics to exclude the Indigenous population closest to the mine from the consultation by focusing on communities located further from the site. Just as KCA did before, the government is favoring the participation of public agencies and municipal councils rather than directly affected people. 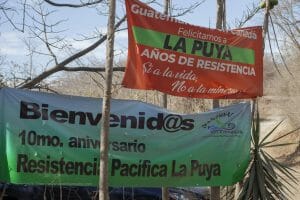 Arbitration encourages both states and corporations to marginalize opposition. We need a new model.

This further demonstrates the absurdity of the supranational arbitration system: companies and governments can argue whatever they like in arbitration proceedings, regardless of the facts on the ground.

KCA acted with impunity to obtain permits and never demonstrated any intention to respect Guatemalan law. The government, for its part, relied on the communities’ arguments to build its defense and now seems to be turning its back on local residents again.

Meanwhile, it is our communities and the Guatemalan people more broadly that will pay a tremendous price if the arbitration tribunal orders Guatemala to pay KCA even a part of its claim or if the consultation is manipulated in order to restart its project.

Guatemala doesn’t need mining projects or international agreements that uphold corporate impunity and greed. Rather, we must address the false notion that Guatemala will develop through natural resource extraction, which adversely affects the social fabric of communities and contributes to our further impoverishment.

The Peaceful Resistance La Puya, along with other organized communities in Guatemala, has reiterated for over 10 years that what’s needed is a different economic model — one that prioritizes clean water and soil, healthy communities, peace, dignity, and self-determination.

Ana Sandoval is a member of Peaceful Resistance La Puya in Guatemala.