Gold and Global Inequality at the Winter Olympics

What would Olympic coverage look like if we considered national wealth alongside medal counts?

When the 2018 Winter Olympics came to a close last month, the global consensus was that by the count of gold medals, Norway and Germany took the top two spots. But is a medal count alone the best way to measure the “winners” of these games? Or should we consider the larger structural and contextual conditions of each country when we measure who took home the most medals?

Given the inequality between nations, perhaps we should compare countries by their medal count measured against their GDP per capita, known as a resident’s purchasing power parity (PPP). Two years ago, I measured the rankings of the Rio Summer Games using this method. What do the numbers look like for Pyeongchang?

First, let’s look at the top ten countries, ranked below by gold medals. 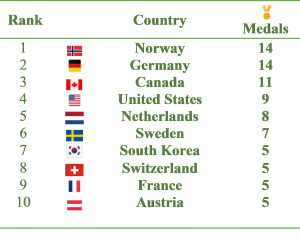 When we consider the national wealth per person (PPP) alongside the number of gold medals awarded per country, what changes do we see? Below are the standings by gold medals, factoring in national PPP estimates. The results are determined by dividing each country’s gold medal count by its PPP rating, multiplied by 10,000 for ease of reading. 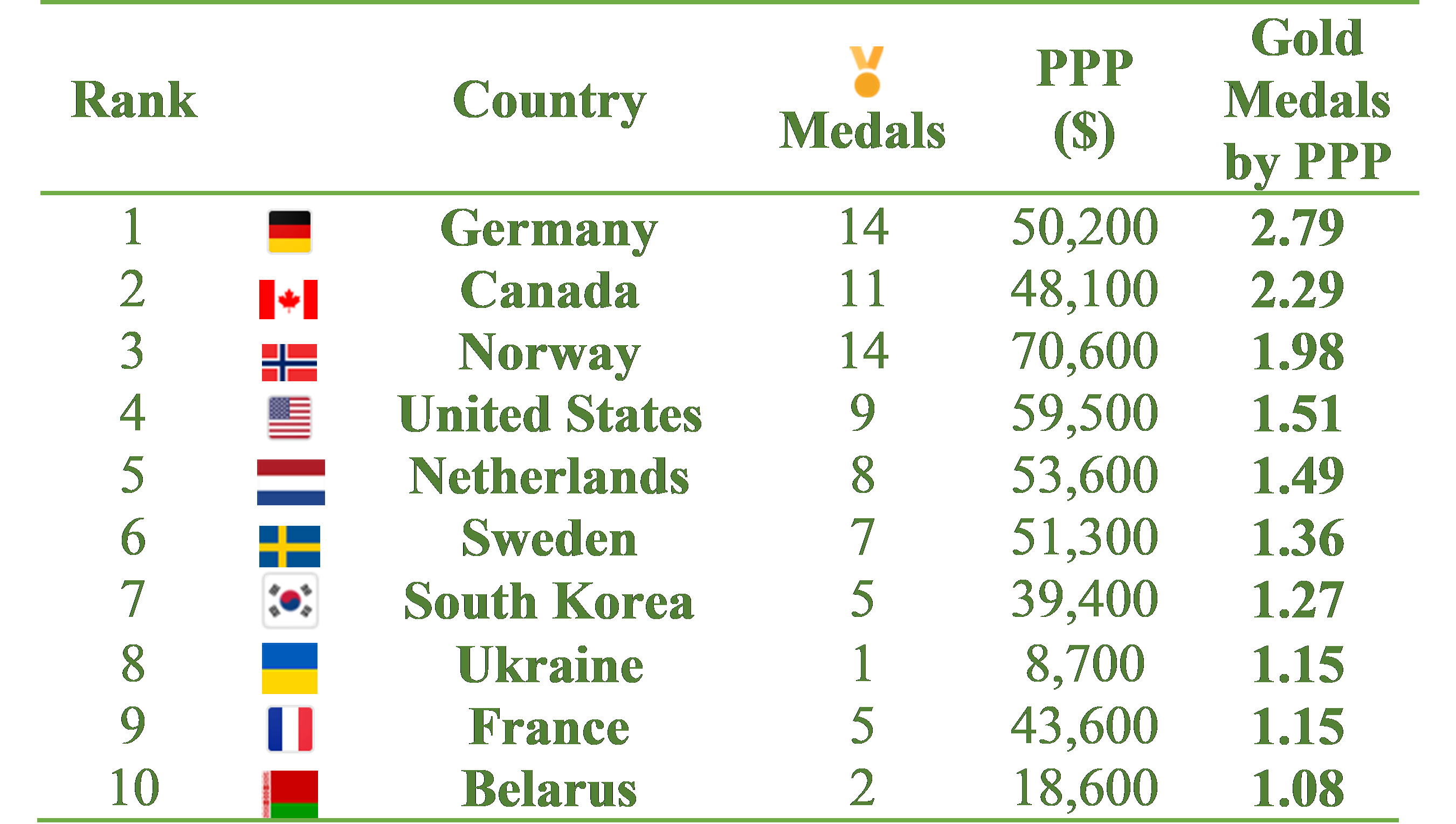 Germany and Canada beat out Norway when we factor in GDP per capita, and the bottom five countries look considerably different. We also see two new additions to the list — Ukraine and Belarus. Given the comparative resources of these winners, surely their success should be publicized. 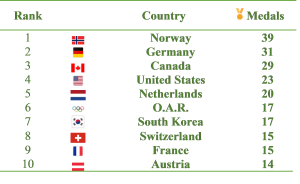 We can compare that with the total medal count when GDP per capita is factored in. 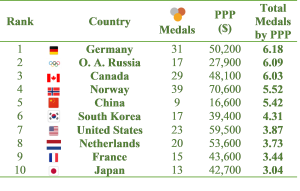 Factoring in GDP per capita with also impacts the overall standings. Germany now tops the list, followed by the Olympic Athletes from Russia. China enters the picture, coming in fifth. The U.S. and Netherlands fall back in the rankings, while tenth place goes to Japan. This more nuanced snapshot offers us new information. What captivating stories of determination could the media uncover if they reported on these results alongside the standard medal count?

The Politics Behind the Gold in the Summer Olympics

Inequality, of course, is not the sole determinant of medals. Other factors can also affect Olympic results. Age, government aid, topography, and national dominance in a specific sport (for example, the way the Dutch have commanded speed skating) all influence Olympic wins. Additionally, foreign athletes living in the U.S. might compete under their national flag or switch allegiances and compete as U.S. citizens.

But national disparities in resource access continue to be a very real factor for some Olympians in their quest for the gold medal. Imperialism and colonization historically set countries on a curve of wealth-building, one that continues to this day. We might be tempted to think global inequalities are irrelevant during the Olympic Games, but the context still matters.

Let’s not look the other way when watching the Olympics. Our cultural responsibility is to examine the many reasons why some athletes find success while others miss out. The Olympics should be an opportunity to tell new stories, ones that move us past the traditional narratives that the gold medal count offers. We can acknowledge the vast disparities of global inequality, even while we praise the winners. Let’s give some recognition to those Olympians who overcame overwhelming odds, regardless of where they stood on the podium.

Jenny McGill (PhD, King’s College London) works in higher education, currently serving as a dean at Indiana Wesleyan University. A Fulbright award recipient, she has worked as an international educator and intercultural consultant with clients and students from over sixty nations. Find her @drjennymcgill or at www.jennymcgill.com.

The Future of American Unions Hangs in the Balance