Who’s #1? The Politics of Olympic Gold

What message do we send when we relentlessly publicize tallies of gold medals won — and ignore the differences in national wealth that shape who medals?

The 2016 Summer Olympics games have ended. By flat gold medal count, the United States dominated. But does a straight gold medal tally make for the best measure of true Olympic success? What if we considered other broader and structural criteria?

Given that wealth creates opportunity, what if we compared countries by considering both medal count and their national economic product?

By simple gold medal count, as of the end of August 21, the United States leads the world handily, as our first top ten list here shows. 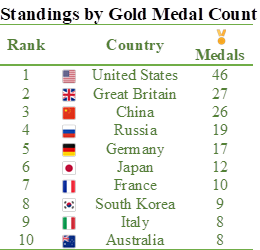 Source of information and icons at http://tinyurl.com/gt563wg

What if we factored in a country’s total PPP — its GDP on a purchasing power parity basis divided by the population — along with the gold medal count? Our second list here reveals a strikingly different top ten. 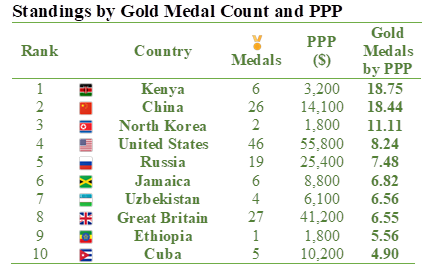 Results are determined by dividing gold medal count by the nation’s PPP rating and multiplying by 10,000 for readability. Source: County Comparisons of PPP (GDP per capita), CIA World Factbook.

If we consider national wealth per person along with the gold medal count, Great Britain falls behind Uzbekistan and the United States behind North Korea.

If we go a step further and factor in national PPP and total medals, not just gold medals, the standings change once again. China now comes out ahead. 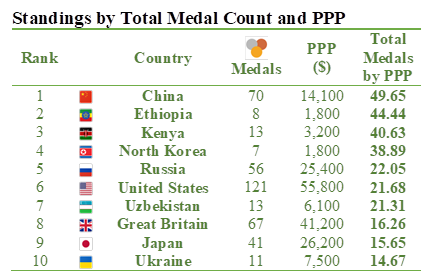 Results are determined by dividing total medal count by the nation’s PPP rating and multiplying by 10,000 for readability. Source: County Comparisons of PPP (GDP per capita), CIA World Factbook.

Should this broader, more complicated picture be something that the media report? What new stories of courage and success could be gleaned if the media did focus on more than just a simple tally of gold medals won?

Many factors, of course, play into who wins Olympic medals, everything from age and weather to topography and national dominance in a specific sport, be that China with table tennis or Kenya with distance running.

Might we also want to acknowledge national differences in the access to commodities that help to make an Olympian great? Taking this broader view would require us to acknowledge the intense stratification of worldwide wealth.

Behind these numbers lie the sordid histories of colonization and the domination of some countries over others. Gold medal tallies largely reflect these histories. But why does this matter? Why not just report gold medal tallies to U.S. viewers and leave it at that?

First, we have a cultural responsibility to see that children in the United States — and adults — are socialized truthfully. A young child who absorbs the Olympic every night watches that gold medal count flash repeatedly across the screen. That we’re number one, the child sees. What that child doesn’t see: that athletes from other nations may have to overcome many more challenges to medal.

Second, historical outcomes have a continuing hold on the opportunities provided athletes within nations. Access to technical expertise, state-of-the-art equipment, and nutrition differs by national GDP and PPP. Amitava Kumar brilliantly relays an example of these dynamics in India. Should we continue to pretend that Olympians enter the games on an equal footing? Those who do win the highest honors might do well to humbly recognize that their prowess may not have been all that has brought them to gold medal status.

Am I grateful to have been born in the United States? Absolutely. Am I proud of our U.S. Olympians? Completely. Should we enjoy and celebrate the Olympics? Definitely.

The Olympics bring us tearful moments of victory, despair, tragedy, and triumph, and with them a range of intimate human expressions. The Olympics offer us a welcome reprieve from the factions, poverty, corruption, and disasters that plague our lands, if only for a moment.

We need an event like the Olympics to bring the world together. But the daily parade of the medal count — shouting out to one and all, over and over, that the United States rates as number one — gives me pause.

Does this simple medal count promote goodwill? Does it present a complete picture? Shouldn’t we be more mindful in our merriment that medals won by some athletes from outside the United States, given the obstacles they have faced, may represent a more significant achievement?

Notes on the Charts

GDP and PPP ratings do not reflect what national governments may provide differentially to their Olympic athletes.

Results do not reflect which athletes may have been raised or trained in a different nation than the home country under which they competed.

Great Britain, for its listed medal count, includes the three countries of England, Scotland, and Wales. The CIA World Factbook lists only the PPP of United Kingdom, which includes Great Britain and Northern Ireland.

Jenny McGill, a King’s College London Ph.D., works in higher education and international affairs. She’s the author of Religious Identity and Cultural Negotiation. Travel for volunteer work, study, and research has taken her to thirty countries and every major continent. Follow her on Twitter.

Where Has Money for Schools Gone?