So-called 'right to work' laws undercut the power of U.S. labor unions and drive up inequality throughout North America.

President Donald Trump claims to support a “fair” new framework for North American trade that puts American workers first. Understandably, this has sparked demands for a fairer distribution of the benefits of trade for workers in all three countries that are part of the North American Free Trade Agreement (NAFTA).

The Canadian government has apparently decided to call Trump’s bluff. During the recent second round of NAFTA talks in Mexico City, Canadian negotiators reportedly demanded that the United States roll back its right-to-work laws. Despite the misleading name, these laws actually discriminate against union activities that protect the rights of workers.

In right-to-work states, individual workers can refuse to pay union dues but still be entitled to union benefits and representation. The purpose is to bleed unions dry—and it works. Union coverage is much lower and income inequality higher in the 28 U.S. states with right-to-work laws. 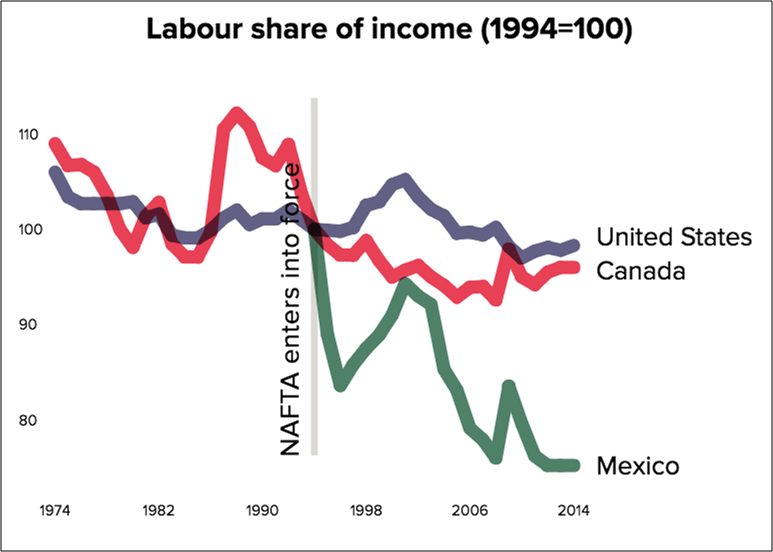 Since NAFTA went into effect in 1994, the labor share of income has fallen in all three NAFTA countries, but most drastically in Mexico, where labor’s take fell by a stunning 50%. Source: CCPA Monitor (September-October 2017).

There have been proposals to enact right-to-work laws in Canada (e.g., by the defeated Tim Hudak Conservatives in the last Ontario provincial election), but so far none have taken root. In fact, since the 1940s, Canadian labor laws have required all unionized employees to pay dues, while entitling even non-members to union representation.

The big question in the NAFTA talks is whether the Canadian government is serious about achieving meaningful progress on labor rights, or if such demands are simply tactical and will be watered down later in the talks.

It is hard to see the Trump administration agreeing to include restrictions on right-to-work in a revamped NAFTA. Even if it did, what are the chances a Republican-dominated Congress would let it pass? Trump endorsed right-to-work laws during the presidential campaign and some congressional Republicans have introduced a national right-to-work bill.

Even so, the Canadian proposal is a smart, positive move that puts the United States on the back foot and tests the sincerity of Trump’s pro-worker rhetoric. Hopefully, this opportunity for meaningful progress won’t be lost. It would not be hard to improve upon NAFTA’s abysmal labor protections, but that would be setting the bar far too low.

As the Canadian Centre for Policy Alternatives (CCPA) emphasized in its brief on the NAFTA renegotiation, truly effective labor provisions must set high, fully enforceable standards. Workers and unions must be able to bring complaints directly to an independent authority that is obliged to investigate fully. There should be consequences, including high fines or trade sanctions, when employers or governments are found to violate

Suppression of basic labor rights and free trade have operated in concert to make NAFTA anything but “fair” for workers. While Trump might not embrace Canadian proposals to curtail right-to-work laws in NAFTA, and whether or not our government is truly committed to the idea, it is totally appropriate to be thinking along these lines as the negotiations move forward.

Originally published by the Canadian Centre for Policy Alternatives.

Scott Sinclair is a senior research fellow with the Canadian Centre for Policy Alternatives, where he directs the centre’s Trade and Investment Research Project.

Report: The Road to Zero Wealth