In the World’s Wealthiest Country, We Can Go Further Than Biden’s Build Back Better Plans

By raising taxes on the wealthy and redirecting other public resources, we can meet everyone’s needs and strengthen our economy.

For the past few months, a debate has been unfolding over what it will take to address the country’s infrastructure needs. Earlier this year, President Biden released the American Jobs Plan (AJP), an infrastructure blueprint that included transportation, bridges, water and sanitation, broadband, and buildings, including childcare facilities and public housing. It came alongside the American Families Plan (AFP), which included universal free pre-K, free community college, childcare, a national paid family medical leave program, and expansions of health care, nutrition programs, and the child tax credit.

These programs — totaling over $2 trillion — would be funded with higher taxes on corporations and wealthy individuals and some degree of deficit spending in the short-run to grow our economic resilience in the long-run. Together, they offered a broad definition of infrastructure that accounted for the physical infrastructure and the human and social infrastructure we need to rebuild and repair this country.

More recently,  a bipartisan framework came out that focuses only on physical infrastructure. It totals $579 billion and relies on financing mechanisms that will privatize public assets. Even though this proposal will meet some of the pressing needs we have, it is restricted to a narrow definition of infrastructure and an even narrower vision of what can be adequately funded. (As we have seen before, this will only lead to higher user fees and fines, and put communities at risk of losing access to basic public services, including water). Indeed, what is at stake is not only how far we go in terms of infrastructure, but how best to allocate and use our wealth and resources.

We know we can do more, even more, in fact, than Biden’s AJP/AFP proposals. In June 2019, the Poor People’s Campaign released a Poor People’s Moral Budget. Rather than a formal congressional or fiscal budget, the Moral Budget made two essential points: 1. We have abundant resources to meet everyone’s needs; and 2. Redirecting and investing public resources into meeting everyone’s needs will strengthen our economy.

This May, inspired by this idea of a “Moral Budget” and policy prescriptions the Campaign has been developing, members of Congress introduced the “Third Reconstruction Resolution.” The sweeping legislative resolution offers an omnibus vision of what it means to fully address poverty and economic insecurity, including around infrastructure. As Rev. Barber said at the National Poor People’s and Low Wage Workers’ Assembly, “only poor and low-wealth people and their moral allies have the legitimate contractor’s license to reconstruct America.” It is now endorsed by the Congressional Progressive Caucus and a growing number of lawmakers from dozens of states. 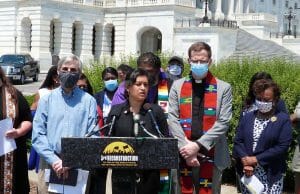 We have actually seen a glimpse of what this vision might look like in practice. During the pandemic, government programs were significantly expanded. Medicaid enrollment went up 14 percent, covering over 80 million people, with 10 million more people enrolled since last January.

These millions needed free health care that they could access and afford, not private insurance, COBRA, or coverage they could never use because it was too expensive; Medicaid met this need. Likewise, stimulus payments and expanded unemployment insurance have kept millions of families and the economy afloat, after jobs were down and bills still needed to be paid. Federal moratoriums on evictions have prevented mass homelessness and state and local moratoriums on water shut offs have prevented millions of people from losing their access to water.

Although these programs have been a lifeline in the pandemic, there has been pushback against them. Several states have refused to expand Medicaid and others are prematurely ending expanded unemployment programs. This resistance is not just cruel or inhumane. It has a history, one that is rooted in the ongoing redefinition of who is entitled to all of our Constitutional and human rights. Similar counterattacks came in response to both the First and Second Reconstruction eras, when multi-racial alliances expanded democratic participation and the substantive rights that a robust democracy offers. I encourage people to read Rev. Liz Theoharis recent article on that history, as well as Rev. Barber’s book, A Third Reconstruction, to fully appreciate the moment we are in today.

In a longer policy brief, the Kairos Center has published powerful statements from the grassroots, moral and political leaders who have put forward the call for a Third Reconstruction. Their words recall the Statement of Demands For Rights of the Poor presented to federal agencies and departments during the 1968 Poor People’s Campaign by the Committee of 100. The Committee, which was made up mainly of poor people, lobbied Congress leading up to and during the 1968 Campaign’s six-week encampment on the National Mall.

They wrote: “We come to you as representatives of Black, brown and white Americans who are starving in this land of plenty. We come to you because people who want to work can’t find jobs….we come to you with a direct request. We ask you to eliminate programs that try to fit poor people to a system that has systematically excluded them from sharing in America’s plenty. We say that the system must change and adjust to the needs of millions of who are unemployed and under-employed…. We have come here to say that we don’t think it’s too much to ask for a decent place to live in, at reasonable prices, in a country with a Gross National Product of $800 billion. We don’t think it’s too radical to want to choose the type of housing and the location. We don’t think it’s asking for pie in the sky to want to live in neighborhoods where our families can live and grow up with dignity…”

These are the legacies upon which we are building the Third Reconstruction today.

Originally published by the Kairos Center. Read the rest of the policy briefing, including statements from Members of Congress and leaders from the Poor People’s Campaign, here.

Shailly Gupta Barnes is the Policy Director for the Poor People's Campaign: A National Call for Moral Revival and the Kairos Center.

Getting Out of Poverty Shouldn't Be About Luck