Americans are a competitive lot, eager to prove skill and determination in everything from the Olympics to the space race of the 1960s. But there’s one contest in which the U.S. has been ranked in first place on the international stage among the major developed nations– one where the top prize is certainly not coveted.

Many broadly disparate sources rank the United States at the head of the pack among major developed nations when it comes to economic inequality. The World Bank’s 2018 ranking places the U.S. as 52nd worst in economic inequality out of 149 countries – between Uganda and Haiti. Meanwhile, the CIA’s World Factbook places us at 39th worst of 157 countries in the inequality of distribution of family income –between Peru and Cameroon.

The narrative of American inequality has gained even more traction thanks to economists like Thomas Piketty and Nobel Laureate Joseph Stiglitz, with their work on economic inequality sparking a sensation, including on Wall Street. After chronicling extensive data, former World Bank chief economist Stiglitz concluded that the U.S. is approaching the inequality levels of Iran, Jamaica, Uganda, and the Philippines.

Piketty and Emmanuel Saez observed in 2014 that an average adult in the top 1 percent earned 81 times more than an average adult in the bottom 50 percent. Piketty and Saez describe this ratio as “similar to the gap between the average income in the United States and the average income in the world’s poorest countries, the war-torn Democratic Republic of Congo, Central African Republic, and Burundi.” But none of this data begins to answer the great mystery of why American economic inequality is ranked worst among major developed countries.

In a 2017 collection of articles, Piketty’s concluding response blamed the disparities on the American educational system. While this may have some explanatory force, the U.S. educational system has displayed strong elements of inequality for many years. However, as the Piketty curves themselves depict, the above numbers describe a comparatively recent phenomenon. Piketty himself concluded that he remains puzzled and invited further political explanations.

Stiglitz has argued that the rules of the game have been rewritten in favor of the extremely wealthy.  This is getting warmer. But it still begs the question: just how and why did these rules get rewritten?

Causality is a rough thing to determine, and one short article certainly cannot establish it. But campaign finance cases decided by the U.S. Supreme Court do precisely correlate with the dramatic change in the distribution of U.S. income that Piketty, Stiglitz, Saez, the Organization for Economic Cooperation and Development, the Economic Policy Institute, and others all trace back to around 1980. 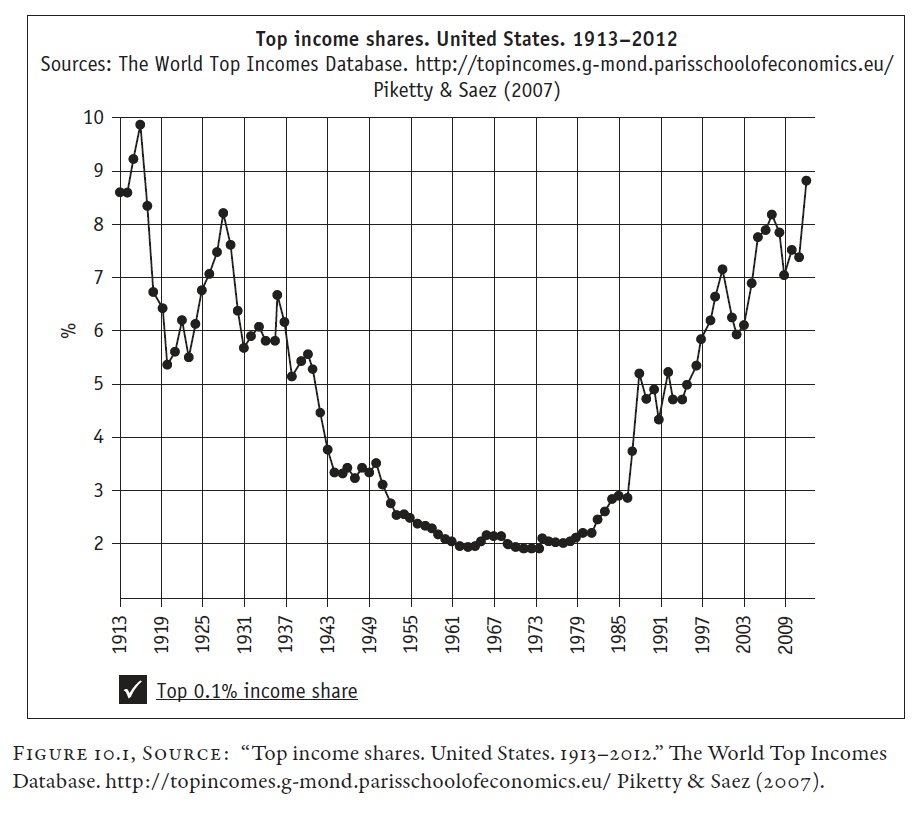 In my recent book, Politics and Capital: Auctioning the American Dream, I argue that the answer to the great American inequality mystery hides in this curve. The graph reveals astonishing time correlations between the geometric rise in income inequality in the United States, and the campaign finance cases.  These cases confer strong constitutional protection to spend vast sums of money to finance political campaigns.

Starting around 1980 and continuing through today, the increase in the concentrations of wealth and income coincides remarkably with the increase in constitutional protection for property interests to spend vast amounts of money to elect candidates of choice. This protection begins with the Supreme Court’s ruling in Buckley v. Valeo.

Buckley, decided in 1976, is the first in a long line of cases which broadly invalidate government restrictions of campaign finance. Buckley extended constitutional protection, under the free speech clause, to spend vast sums of money to elect political candidates. Buckley seismically altered the election landscape. It opened the “money gates,” flooding American elections with torrents of dollars.

Opening those money gates  spawned massive political consequences. In my book, I examine considerable empirical data that suggests the candidate who raises the most money wins. Politics and Capital also shows that those winning candidates well understand who elected them, and follow the dictates of their donors more than their own constituents. This is true even if donors live across the country from the politicians they sponsor.

The campaign finance cases have allowed these wealthy donors, who might be referred to as property interests, to dramatically recast public policy in their favor — particularly in the area of taxation.

John Attanasio on the Supreme Court and inequality

The Piketty curve shows that the disparity in income dramatically ascends in 1980, after the first full presidential election cycle following the 1976 decision of Buckley v. Valeo. Just two years after Buckley came the 1978 decision of First National Bank of Boston v. Bellotti. Bellotti afforded corporations the constitutional right to spend money to influence a referendum about personal income taxes.

How did these Court decisions play out in the policy sphere? During the 1980s, Congress plunged income and estate taxes disproportionately in favor of property interests. At the same time, politicians and their benefactors began their assaults on the New Deal welfare state, targeting government regulations, unionization, and the social safety net for the vulnerable.

In his Buckley dissent, Supreme Court Justice Byron White said that the decision stood for the proposition that “money talks.” Buckley and subsequent campaign finance decisions equated spending money to elect a candidate with speaking, laying the foundations that would allow a very small group of wealthy campaign donors to dominate American political life. The data analyzed in Politics and Capital shows that wealthy campaign donors share certain common interests, as one would expect, driven by their common economic situations.

The resulting codependent growth in political inequality generates further economic inequality, and so on. And so the deadly spiral begins. This constricting coil chokes both our democracy and our market economy, leading further down a path towards oligarchy and oligopoly.

John Attanasio’ s most recent book is Politics and Capital: Auctioning the American Dream, published by Oxford University Press. He has advised courts, legislatures, ministers, and constitutional commissions on democracy, economics, and the rule of law for more than 30 years.

157 of World's 200 Richest Entities Are Corporations, Not Governments