President Trump drew a smaller crowd than he expected for his rally this past Saturday, but that wasn’t the case for the Poor People’s Campaign. Well more than a million people viewed the campaign’s Mass Poor People’s Assembly and Moral March on Washington via Facebook that same day. Many more viewed MSNBC and C-SPAN simulcasts and two repeat broadcasts over the weekend.

According to organizers, the three and a half hour event was “the largest digital and social media gathering of poor and low-wealth people, moral and religious leaders, advocates, and people of conscience in this nation’s history.”

The virtual rally lifted up people who are living the interconnected injustices that have been the campaign’s focus for the past two years: systemic racism, poverty and inequality, ecological devastation, and militarism and the war economy. Many spoke of how the Covid-19 pandemic has only deepened existing inequalities.

Natalia Fajardo had a job in a chocolate factory in Milwaukee, Wisconsin, until the crisis hit.

“Now, more than ever, I feel the fragility of just being OK. My partner and I are part of the millions that are just one emergency away from losing it all. Meanwhile our government uses this crisis to fatten the pockets of those who can’t fit any more bills in their already overstuffed pockets.”

Fajardo is now a volunteer organizer with the Wisconsin Poor People’s Campaign. “Because I know there’s enough,” she explained. “Enough food, enough clean and safe water, and definitely enough money for every human being — not just in this country but in our planet — to live with dignity.” 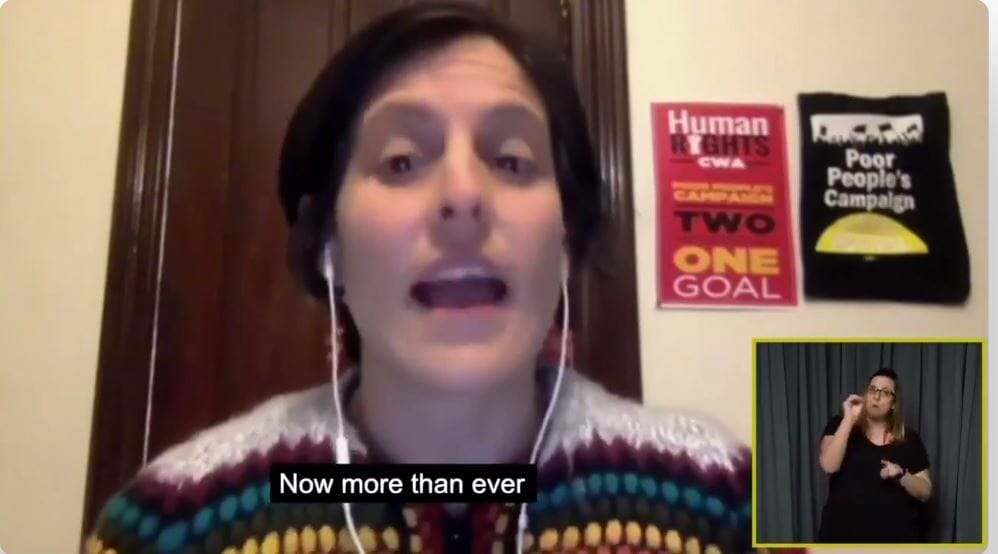 Fajardo’s testimony underscored a major theme of the campaign: the myth of scarcity. As campaign co-chair Rev. Dr. Liz Theoharis put it, “People are being abandoned amidst abundance.”

Who’s getting more than their share of that abundance? One testifier after another pointed to the rich, large corporations, and the military.

“I live in a place that has three superfund sites,” said Olinka Green, of Dallas, Texas, referring to areas the U.S. government has deemed highly toxic.

“We’re being killed by the air, with concrete batch plants,” Green said. “We’re being killed by the water, with a place called Lane Plating, a company that’s been here 90 years. And in the 90 years they’ve been there, they’ve been putting cyanide, mercury, lead, hexavelant chromate, and sulfur in our water and our ground. Our children are dying, developing skin cancer. Our women are developing breast cancer. We are being attacked by the corporate KKK. White supremacy used to be in a sheet. Now it’s wrapped up in a corporate business suit.” 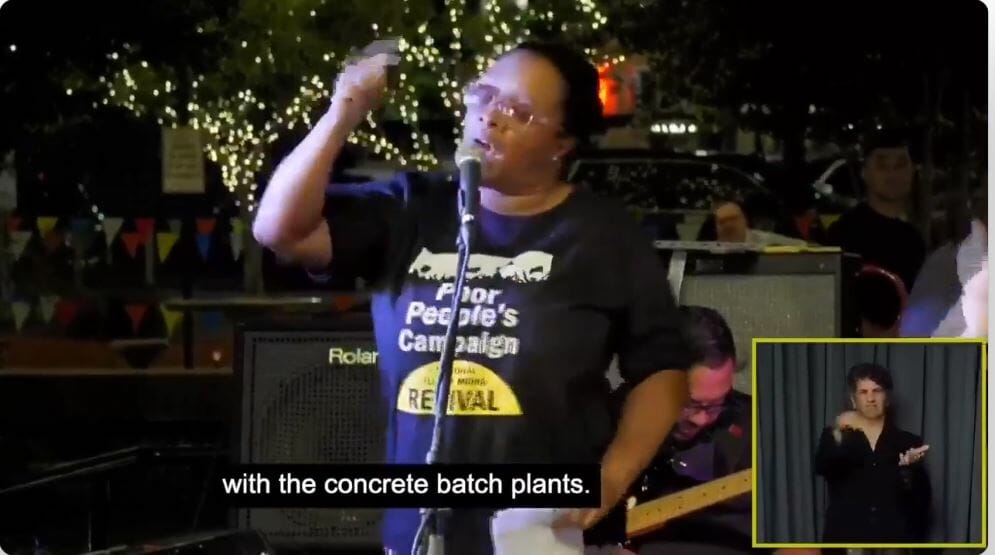 Chris Overfelt, an Air Force National Guard veteran, spoke out against never-ending wars and the never-ending flood of taxpayer dollars into military contractors.

“It’s no secret that there’s always money for a bigger military and more jails, but never enough for education and the poor,” Overfelt said.

Phyllis Bennis, of the Institute for Policy Studies, pointed out that 54 cents of every discretionary federal dollar goes to the military, while just 15 cents goes to anti-poverty programs.

As part of the virtual rally, the Poor People’s Campaign launched a policy platform to reprioritize national resources to elevate human needs instead of enriching the wealthy and expanding the military.

Barber lashed out at members of Congress who ask the Poor People’s Campaign to choose just one single priority when they’ve handed out trillions to banks and corporations in response to Covid-19. He demanded that the next round of stimulus legislation include funding for state and municipal public servants but also for rent forgiveness, guaranteed healthcare and living wages, sick leave, and a moratorium on utility cut-offs.

“This is not about right versus left. That’s too puny,” Barber said. “It’s about life versus death.” 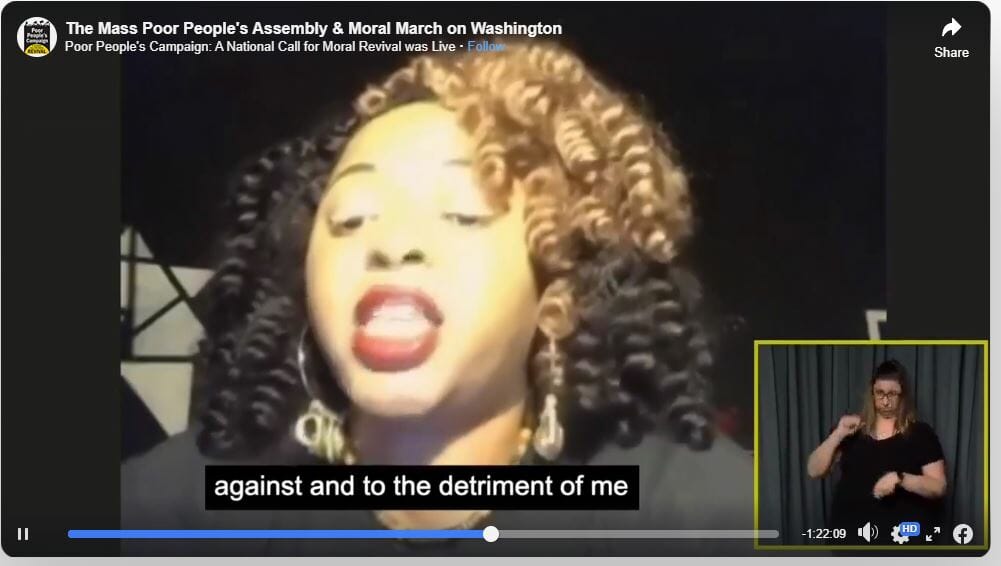 Single mother India Donald Ford told of her real life struggles for safe housing in Arkansas, a state that does not require landlords to make home repairs. After describing horrific sewage problems in three separate rental units, Donald Ford said, “These dangerous, unempathetic practices are part of a system that has been set up by the privileged and wealthy against — and to the detriment of — me and all the working class poor people.”

Now a community activist, Donald Ford is pushing back.

What these wealthy and privileged didn’t count on, she said, “Is us. Us galvanizing our collectives. Us drawing strength from those who came before us. Us unifying, standing shoulder to shoulder empowering each other. Us loving to get in good trouble. And us being that new and unsettling force who will not stop until we have safe housing for all people and future generations to come.”

Sarah Anderson directs the Global Economy Project at the Institute for Policy Studies and is a co-editor of the IPS web site Inequality.org.