Unions Have Survived Tough Times Before

My ancestor’s 19th century story is a reminder of how labor unions have bounced back from even bigger hits than the recent Supreme Court ruling.

The U.S. Supreme Court has just dealt unions a bruising blow. In a 5-4 vote, the court ruled that public sector employees who benefit from unions’ collective bargaining services will no longer have to pay for them.

At least initially, this is expected to result in a steep drop in union resources and bargaining capacity, which will likely reduce employee pay. One Illinois university study, for example, predicts that public school teacher salaries in that state will drop by an average of 5.4 percent.

But over the course of its turbulent history, the American labor movement has survived much worse. And it will find a way to get back on its feet.

One of my ancestors was in the center of the drama during one of labor’s most roiling eras. Albert G. Denny, my great-grandmother’s brother, started out as a child laborer in a glass factory. He eventually became the national organizer for the Knights of Labor, the leading voice for U.S. workers in the 1880s.

Compared to the challenges Albert faced in the 19th century, the new threat against organized labor still seems bad — but not as bad.

Teachers in several states have recently been striking over low pay and school underfunding. In my great-uncle’s day, that could get you shot.

As a young glass blower in Pittsburgh in 1877, Albert witnessed one of the most violent attacks on labor in our nation’s history. When railroad workers there joined a nationwide strike, the governor sent in militia who opened fire on the workers, killing 20. After more than a month of conflict, federal troops marched in and crushed the strike.

Within a few years of this tragedy, the labor movement began to rebound. Albert became secretary of a glassworkers union that effectively negotiated over wages, apprenticeships, and other labor conditions. Later he became the lead organizer for the Knights of Labor, which grew rapidly to represent 20 percent of all U.S. workers by 1886.

The anti-union violence, however, didn’t end.

I have a copy of a telegram Albert sent the head of the Knights of Labor after learning that railroad baron Jay Gould’s goons had shot into a crowd of strikers in East St. Louis, killing six. “You should have Gould arrested and charged as accessory to murder,” Albert wrote. 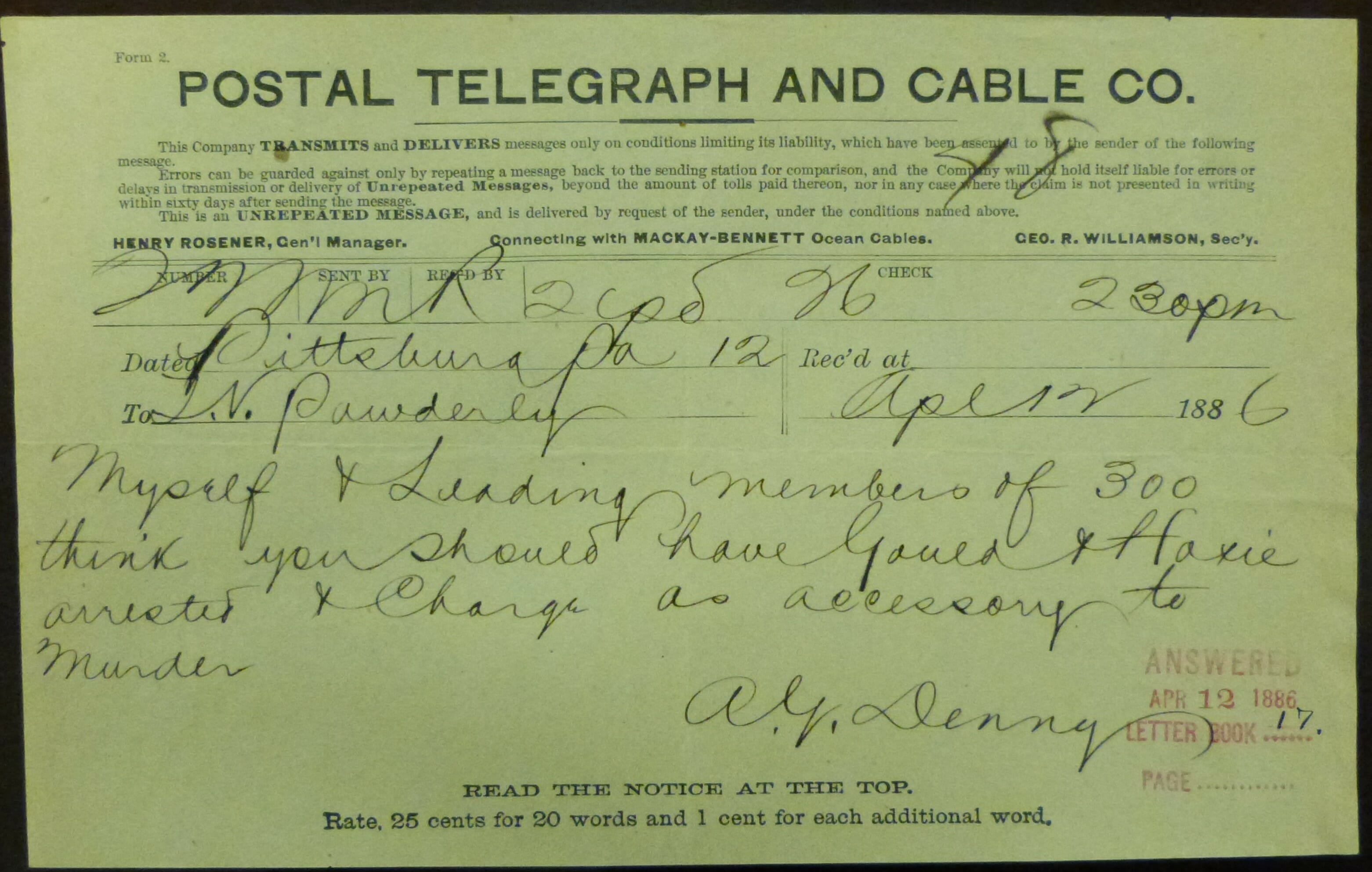 Albert Denny telegram to Knights of Labor leader Terence Powderly on behalf of glassworkers union LA300. He is responding to deputies shooting workers on strike against railroad baron Jay Gould.

But out of the Knights’ ashes, new forms of organizing took shape. By the 1930s, the movement was powerful enough to push President Franklin Delano Roosevelt to enact landmark labor legislation that workers still benefit from today, including the minimum wage and the 40-hour week.

Once again, American workers will need to find new ways to build power against big money interests. Fortunately, this is already beginning.

In anticipation of the Supreme Court ruling, public sector unions have been much more proactively reaching out to their members, hearing about their needs and concerns, and broadening the scope of their efforts beyond pay and benefits to immigrant rights, racial justice, and other social issues.

My great-uncle Albert Denny’s union hall is still standing in Pittsburgh’s South Side neighborhood, but it’s a deli/whiskey bar now. Some things change. But the need for working people to be able to come together to negotiate over conditions that affect their lives will not.

Why ‘Janus’ Figures to Juice Income Inequality in America

We Subsidize the Wrong Kind of Agriculture