Trump’s Tax Plan: A Billion or Three for Guys Like Him

If the president's tax plan passes, it'll be like he's cutting himself a check from the Treasury.

What’s the largest personal stake a U.S. president has ever had in legislation he signed into law? Whatever it was, it’ll be dwarfed by what Donald Trump’s signature will be worth — to himself — if Congress passes his proposed tax plan and puts it on his desk.

If that happens, Trump will be effectively cutting himself a check from the U.S. Treasury for several billion dollars.

Call me cynical, but it seems that’s exactly what Trump has in mind. His plan just fits his tax situation — or what we know of it, without access to his tax returns — too perfectly.

The president’s tax proposal eliminates two taxes that mostly benefit the wealthy, and cuts a third tax roughly in half. That would bestow a windfall worth billions on the Trump family.

First, there’s the elimination of the alternative minimum tax, or AMT.

The AMT applies to taxpayers whose income tax liability otherwise would be reduced excessively by certain deductions, including deductions commonly claimed by real estate owners like Trump. It’s like an alternative tax system in which the rates are lower but fewer deductions are allowed. 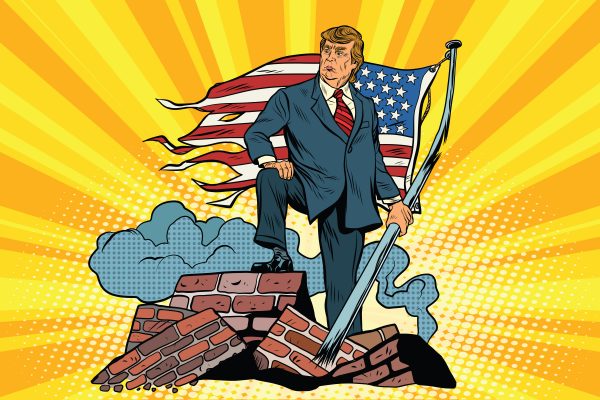 The one glimpse we’ve had of Trump’s tax returns suggests he stands to benefit massively from the repeal of the AMT. In 2005, Trump’s income exceeded $150 million, but his regular tax liability was just $5.3 million — that’s barely a 3.5 percent tax rate.

Still, that’s chump change in comparison to the tax windfall he hopes to bestow upon himself by cutting the top tax rate on the bulk of his income by more than half, from nearly 40 percent to 15.

We’re not talking about the corporate tax rate here. Trump could reap a tidy personal benefit from slashing the corporate income tax too, but the far bigger prize in his plan is its treatment of income from businesses that don’t pay corporate taxes.

Under current law, the income of those businesses is taxed to their owners at individual income tax rates. Under Trump’s plan, income from those businesses would receive preferential tax treatment, with a maximum tax rate of 15 percent.

That would be the final act in turning our nation’s tax policy on its head.

Keep up with the tax debate

That means no matter how Trump invests his billions — in real estate, bonds, stocks, business ventures, etc. — the income he generates would be taxed at a rate lower than what workers pay on their wages.

Trump’s preferential rate for business income is unprecedented. Is it a coincidence that the first politician to propose it just happens to be a real estate magnate with interests in literally hundreds of unincorporated businesses?

The biggest tax windfall Trump hopes to secure for himself, however, is one he won’t live to enjoy. I’m referring to the estate tax, of course — a federal levy on estates worth over $5.5 million for individuals.

Trump’s plan would eliminate that tax, no matter how large the estate. For Trump, that would mean as much as $1.4 billion on an estate estimated by Forbes at $3.5 billion.

The bottom line: If Trump’s tax plan passes, he’ll have secured for himself billions in tax benefits in less than a year as president.

Not bad work if you can get it, huh?

Want to get involved?

Bob Lord is a veteran tax lawyer who practices and blogs in Phoenix, Arizona. He’s an associate fellow of the Institute for Policy Studies. This article was originally published by OtherWords.

Closing the Loopholes America’s Super Rich Love: Can the Dog Catch Its Tail?

How we can prevent the wealthiest of our wealthy from exempting virtually unlimited billions from tax.

A Perfect Storm Has Elon Musk Paying $11 Billion in Tax

But our only quarter-trillionaire is still not paying anything close to his fair tax share.

Have we just about decided that the further accumulation of billionaire fortunes makes for good public policy?

We Get Sick, They Get Rich