A new online tool provides data on whether specific corporations are sharing tax cut windfalls with employees or only rewarding executives and shareholders.

Once again, President Trump touted the supposed benefits of the new tax law at an April 12 ceremony in the Rose Garden. “Our massive tax cuts are growing paychecks all over our country [and] creating jobs and expanding the American dream just like we said would happen,” he said, in a surprisingly disciplined statement.

This declaration — a popular one among the right wing — is patently false, as a recently launched “Trump Tax Cut Truths” website from the Americans for Tax Fairness (ATF) shows.

ATF analysts compiled data on the 1,000 largest U.S. firms, as well as smaller companies that have announced bonuses or wage hikes. What they found is that only 4 percent of American workers are receiving a bonus or raise in the wake of this tax bill. The annual tax cuts these corporations are estimated to enjoy amount to nearly $61 billion — nine times more than the total bonuses and wage increases they’ve given their workers.

The firms that have neglected to give out any benefits to their workers, what ATF calls the “Corporate Cheapskates,” include some of the country’s largest, such as Amazon, Google parent company Alphabet, and Berkshire Hathaway. Within the top 500 U.S. corporations, just 65 have announced wage hikes or bonuses. This means the overwhelming majority of companies, big and small, did nothing to help workers out after the passage of this bill that is, according to the President, “growing paychecks all over the country.”

How to track the new data

So what are these companies up to instead of helping their workers? The Americans for Tax Fairness tracker allows you to find out how specific firms are responding to the massive windfall they’re receiving thanks to the Trump-GOP tax bill.

Many companies are using their tax savings for massive stock buybacks. In fact, the amount they’re spending on buybacks is 37 times as much as they’re handing out in bonuses and raises. By artificially increasing share values, such buybacks reward shareholders and executives who receive stock-based pay. According to ATF, for example: 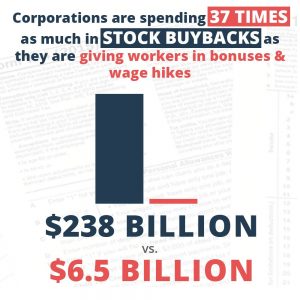 Others have undercut the president’s claims even further by announcing job cuts. For example:

These companies are choosing not to share the wealth, even on the heels of the massive corporate welfare program that is the new tax law. This is hardly surprising, given the extreme disparities within large U.S. corporations. As a result of a new SEC regulation, publicly held U.S. firms are now required to report the pay gap between their CEO and their median worker. The pay ratios at some of the top job-cutting firms are among the most outrageous:

House Minority Leader Nancy Pelosi was crucified for her comments that these “tax cut” bonuses were like “crumbs.” But while she might’ve been more tactful, her broader point was absolutely correct. American workers are getting only a tiny fraction of the benefits of a tax law designed to reward corporations and the wealthy. With their tax cut tracker, Americans for Tax Fairness has made it easier to find out exactly how small those crumbs are.

Brian Wakamo is a Next Leader at the Institute for Policy Studies.

An Equal Pay Victory for Our Winningest National Team

The United Auto Workers and climate groups join together to push the USPS to buy electric postal vehicles to replace their old, gas-guzzling fleet.

The Fake Frugality of the Fabulously Fortunate