Toys R Us Worker: Wall Street Billionaires Should Not Be Making Money By Putting People Out of Work

As the bankrupt toy chain attempts a comeback, retail workers who lost their jobs after private equity takeovers are fighting for accountability.

For many years, Giovanna De La Rosa enjoyed working at Toys ‘R’ Us — especially during the holiday shopping season.

“I loved bringing joy to families and to children,” she shared at a recent congressional hearing. “I watched so many of the local kids grow up over the years while shopping in our store.”

Now Toys ‘R’ Us is trying to make a comeback. It re-opened its first U.S. store in New Jersey just in time for Black Friday, and it’s planning to open another in Texas before Christmas.

But the company is a shadow of its former self, and many former Toys ‘R’ Us employees are still struggling to get back on their feet. De La Rosa, an assistant store manager at the time of the layoffs, searched for a year and a half to find another full-time position before having to settle for a seasonal job.

Who does she blame for her employer’s collapse? Greedy Wall Street firms. 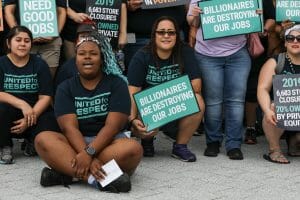 Toys ‘R’ Us was still profitable in 2005 when three private equity funds — KKR, Bain, and Vornado — acquired the retailer and loaded it up with billions of dollars in debt. This level of indebtedness “served no rational business need for Toys ‘R Us,” according to Eileen Appelbaum, co-director of the Center for Economic and Policy Research.

The buyout forced the company to pay more than $400 million per year in interest, on top of hundreds of millions of dollars in “advisory” fees to the private equity funds who’d purchased it. All these extra costs drove the company to ruin.

This is the typical M.O. for private equity funds that specialize in highly leveraged buyouts. They take out massive loans to finance corporate takeovers, quickly suck out whatever value they can, and then stick the companies with the IOUs.

ShopKo, Payless ShoeSource, Gymboree, The Limited, and Sports Authority have all collapsed under the weight of their debts after being taken over by private equity funds.  Over the past decade, nearly 600,000 retail jobs in private-equity backed companies have been lost.

De La Rosa traveled from her home near San Diego, California, to Washington, D.C. recently to advocate for legislation that would crack down on this Wall Street recklessness. The Stop Wall Street Looting Act would make private equity firms jointly liable for repaying debts they burden companies with in leveraged buyouts.

The bill also aims to prevent executives from lining their pockets while workers suffer.

The kinds of ridiculous fees that private equity fund managers extracted from Toys ‘R’ Us would face a 100 percent tax. It would also help protect workers in a bankruptcy by banning special executive payouts until employees receive promised severance payments.

After filing for bankruptcy, Toys ‘R’ Us gave its workers zero severance, despite a longstanding policy of giving a week of pay for every year of service. Meanwhile, the co-founders of just one of the private equity firms that took over the company — KKR — both made about $100 million in 2018.

Toys ‘R’ Us has new owners now, and De La Rosa is encouraged by the fact that they have asked her and two other former employees to serve on an advisory group. But what makes her even more optimistic is to see more and more workers standing together to fight for Wall Street accountability.

She’s now a leader in United for Respect, a retail worker advocacy group that has helped pressure the private equity funds to provide some financial support for laid off Toys ‘R’ Us workers.

Her bigger goal: to regulate private equity so they can no longer make money by putting people out of work.

This op-ed was distributed by OtherWords.org.

Sarah Anderson directs the Global Economy Project at the Institute for Policy Studies and co-edits the IPS publication Inequality.org. Follow her at @SarahDAnderson1

Are America's Rich Getting Tired of Winning Yet?