Towering Excess: The Perils of the Luxury Real Estate Boom for Bostonians

Boston is experiencing a luxury real estate boom, with thousands of new luxury residential and rental units in different stages of development. A decade from now, Boston’s skyline and population demographics will be fundamentally altered by decisions being made today.

This boom does have benefits, providing good jobs in the building trades and increasing property tax revenue for the city. But the boom is not helping address Boston’s acute affordable housing crisis. Bostonians today have a median household income of $58,500. Average Bostonians cannot afford the new luxury condos. They will, unfortunately, feel their impact. Boston’s luxury boom figures to push up land and housing costs and accelerate Boston’s already troubling disparities of income, wealth and opportunity.

Suffolk County, the jurisdiction where Boston resides, rates as the most unequal county in Massachusetts, our nation’s sixth most unequal state in terms of the gap between the wealthiest 1 percent and everyone else. And Boston’s racial wealth divide will only worsen if current trends continue. One marker of those trends: In 2015, not one single home mortgage loan was issued for African-American and Latino families in the Seaport District and the Fenway, two Boston neighborhoods with thousands of new luxury housing units.

City officials are failing to understand how such towers play a key role in the global hidden wealth infrastructure, a shadowy system that’s hiding wealth and masking ownership, all for the purpose of helping the holders of private fortunes avoid taxes and oversight of illicit activities. Many Boston luxury properties are functioning, in effect, as wealth storage lockers for global capital.

This report examines how Boston could better protect the public interest and, in the process, capture some of the current luxury real estate wealth flow to support affordable housing for Boston residents. We focus here on residential condominium ownership as a form of “wealth storage” and examine twelve of the highest-priced and presently occupied luxury housing developments constructed in Boston over the last decade.

Boston’s past and current city administrations have permitted an explosion in luxury real estate property construction that is reshaping the city’s skyline and economic composition. With thousands of new luxury units either under construction or seeking permits, city officials ought to be seriously exploring the perils these units pose. 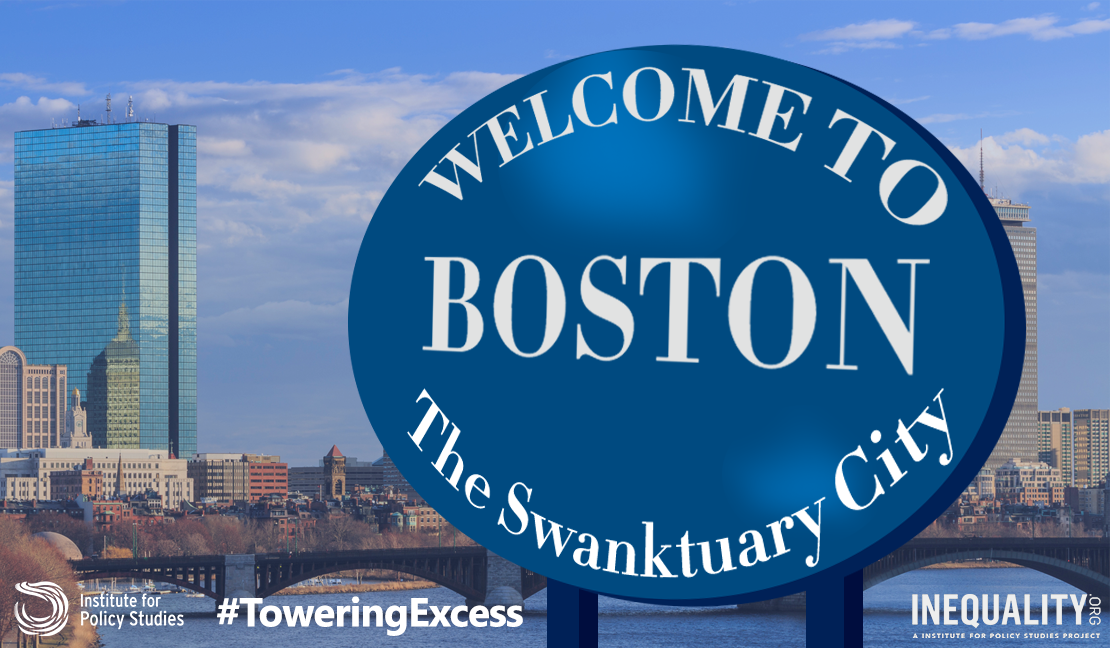 Time to tax the ‘swanktuaries’

Among the negative impacts the luxury boom invites:

Higher Land and Housing Costs. The luxury building boom is driving up the cost of land in central neighborhoods, with a ripple impact on the cost of housing throughout the city. Affluent, but not superrich, households in Boston find themselves pushed to outer neighborhoods, increasing competition for scarce affordable and moderately priced housing.

A More Unequal City. Bringing more millionaires and billionaires to Boston will exacerbate an already grotesque inequality of income, wealth, and opportunity. New residents of these buildings will likely be wealthy white U.S. nationals and international buyers from European and Asian countries in the global 1 percent, compounding the extreme racial wealth divide that already exists in Boston.

A Harboring of Criminal Activity. Boston’s luxury buildings can be used for crimes ranging from international money laundering to tax avoidance.

Ecological Degradation. Luxury projects such as One Dalton Place are requiring the construction of a new fossil fuel energy infrastructure at a time when Boston should be moving aggressively to transition toward 100 percent renewable energy in order to meet our clean energy commitments.

Weak Public Oversight. The pretext of an urgent affordable housing crisis has led to the fast-tracking of dozens of luxury real estate projects. The government oversight bodies responsible for protecting the public interest have become boosters of these projects. Most luxury developers with projects before Boston agencies make campaign contributions to the mayor.

An Unequal Immigration Welcome Mat. Destitute asylum seekers fleeing persecution and danger are currently facing family separation and deportation. But wealthy foreign investors are buying their citizenship through the EB-5 visa program by investing in luxury properties such as One Dalton Place in Back Bay and Pierce Boston in the Fenway. EB-5 recipients receive a two-year green card and a pathway to apply for full citizenship in exchange for their cash.

Neighborhood Apartheid. Boston’s luxury buildings function as vertical gated communities, walling off their residents from surrounding neighborhoods and communities. Developers are even constructing privatized recreation facilities. As one Architectural Digest article featuring One Dalton Place puts it: “Who Needs a Neighborhood When You Can Have These Wild Amenities?”

A More Vulnerable Future. If the luxury real estate market crashes, will the people of Boston be stuck holding the bag? What will be the impact on Boston in the event of a global slowdown or depression in real estate? What will happen with these dozens of behemoth buildings that require extraordinary amounts of energy and maintenance?  Boston taxpayers may end up subsidizing luxury white elephants long after the developers, profits in their pockets, have walked away.

Read the full report below. 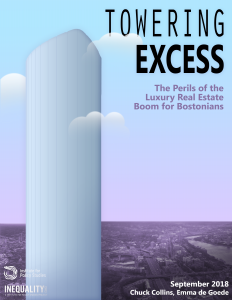 Emma de Goede is a senior at Wellesley College. She is an intern with the Program on Inequality and the Common Good at the Institute for Policy Studies.

Towering Excess: The Perils of the Luxury Real Estate Boom for Bostonians

The Wealth Hiding in Your Neighborhood