A provision nestled deep in the spending bill prevents employers from taking the tips their employees earn.

President Trump signed a massive omnibus spending bill on Friday, ensuring that the lights will stay on in the federal government for another six months. But the bill does more than just allocate funds. Tucked 2,000 pages into the text is a provision that will protect tipped workers from getting their gratuities skimmed by their employers.

The provision is a response to a proposed rule from the Department of Labor, which would have undone years of precedent that gave workers the tips they earned. The controversial proposal would have let employers take ownership of the tips paid to workers who made a full minimum wage (as opposed to the tipped minimum wage).

Supporters said the rule was meant to allow for tip pooling to reduce inequality between restaurant workers in the line of service and those in the back of the house. The National Restaurant Association — a powerful industry lobby nicknamed “the other NRA” by worker groups — supported that framing.

But the language of the rule never stated the tips had to stay in the hands of workers. Worker advocates said the rule would give employers permission to pocket the gratuities that customers left their servers. The Economic Policy Institute estimated a loss of $5.8 billion a year to workers if the provision were enacted. Now, the spending bill rider sets penalties for employers who skim gratuities and gives workers the right to sue employers who take tips.

The victory belongs to the workers, organizers, and advocates who maintained fierce backlash to the proposal. Tipped employees, like Thea Bryan, explained how tip-dependent wages already meant take-home pay was constantly in flux. Giving managers control of her tips, Byan explained, meant she had less control over her own life.

Organizations were quick to act. The Restaurant Opportunities Center United released a report connecting the rule change to the NRA’s lobbying efforts, and showed how President Trump’s own properties could benefit from such a rule. Celebrities, including Jane Fonda and Amy Poehler, brought attention to the issue while campaigning to raise the minimum wage for tipped workers.

Members of the public signed hundreds of thousands of comments against the proposal. Restaurant organizers delivered the comments personally during a protest outside the Labor Department as they dropped a banner over the building’s roof urging Trump not to steal their tips. 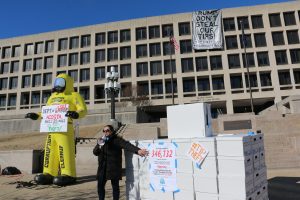 Labor activists drop a banner and stage a protest in front of the Department of Labor, February 5, 2018.

Members of Congress listened to the backlash. When Alexander Acosta appeared before Congress for budget hearings, Representatives Rosa DeLauro and Katherine Clark pressed the labor secretary for hurting the very workers his department is meant to protect. “This is, in essence, legal wage theft,” DeLauro told Acosta.

Under pressure, Acosta said that no one wanted owners to skim tips, but the responsibility to protect workers was in the hands of Congress, not the Department of Labor. Acosta promised to lend his support to legislation that would prevent employers from pocketing the tips.

In response, DeLauro and Clark introduced the Tip Income Protection Act to ensure that workers maintained ownership of their tips. The detailed questioning from the representatives paved the way for bipartisan support on the issue. Senator Patty Murray then worked with Acosta to add the rider into the spending bill.

It's time to end the two-tiered tipped minimum wage

The deep anger over the proposal may have played a role in Acosta’s defensive position during the hearing. After all, the rule specifically includes language defending the use of tip money to make capital improvements and lower menu prices. The proposal said such use of tips had “potential benefits to employees and the economy overall.” Acosta also came under fire for reportedly “shelving” analysis of the rule that showed bosses could skim billions off worker tips.

The National Restaurant Association also attempted to turn the legislation into a win for their side. Angelo Amador, the executive director of the Restaurant Law Center, the NRA’s legal advocacy group, told The Washington Post that they’d never asked for employers to be allowed to skim tips. In a statement, he framed the provision as a success for allowing tip pooling, though he added that the group was concerned that “the enforcement and penalty language for unintentional violations goes too far.”

Spin aside, the spending bill provision is welcome news for tipped workers around the country. The win shows that with organizing, public pressure, and legislative creativity, positive change is possible, even under the most hostile of administrations.

Negin Owliaei is a researcher at the Institute for Policy Studies and an co-editor of Inequality.org.

Getting Granular on America’s Income Distribution