Trump officials reportedly deep-sixed an internal analysis of the proposed reform that indicated workers would lose billions in income.

Trump labor officials sparked outrage late last year by proposing a reform that would allow bosses to pocket their employees’ tips. But even these unabashedly anti-labor labor officials were apparently too embarrassed to reveal just how much this rule change would harm restaurant servers and other tipped workers.

According to a Bloomberg exposé, the Department “shelved” its own economic analysis of the proposal when the numbers indicated workers could lose billions of dollars in income. That cowardly maneuver has turned up the klieg lights on this whole nefarious, industry-driven effort. Under pressure from labor activists, the Department of Labor’s Office of the Inspector General has just launched an audit of the rulemaking process. 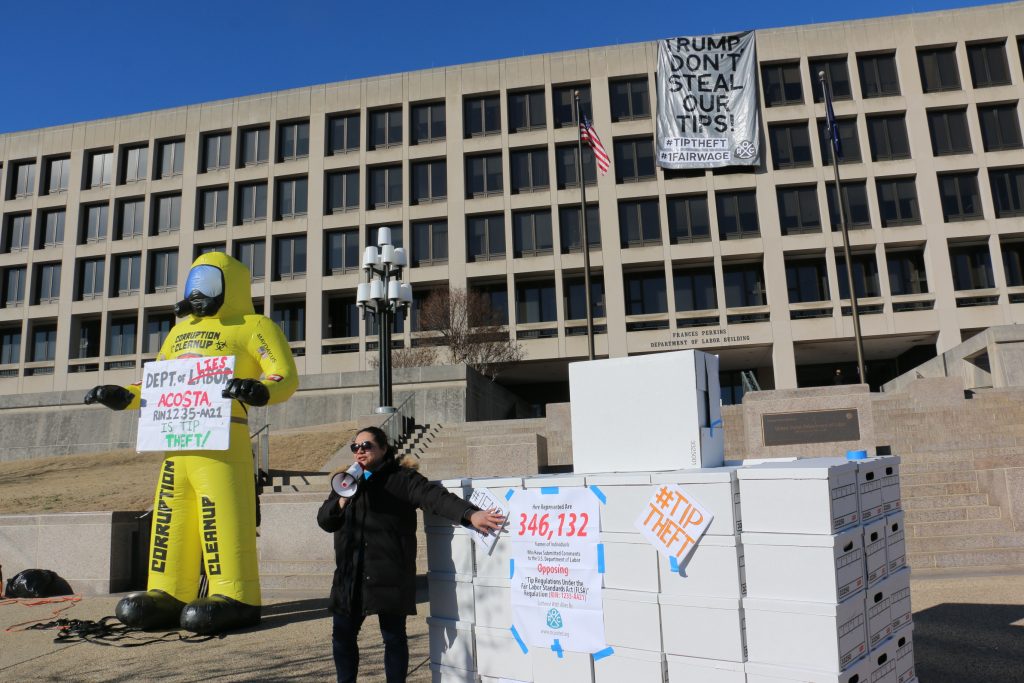 Labor activists drop a banner and stage a protest in front of the Department of Labor, February 5, 2018.

The Institute for Policy Studies, the National Employment Law Project, and numerous other groups filed letters urging the Department of Labor to immediately withdraw the proposal. If the Department does not take this action, the pro-worker groups are demanding that the public be allowed to weigh in on the matter after the audit is completed.

Before the official public comment period closed on February 5, the Department of Labor received about 215,000 comment letters, with the vast majority in opposition to the proposal. Restaurant Opportunities Centers United, which advocates for better working conditions for restaurant workers, also organized a protest outside the Department’s headquarters where a banner was hung off the side of the building with the slogan “Trump Don’t Steal Our Tips.”

“The Department of Labor should be focused on improving tipped workers’ economic security,” wrote Institute for Policy Studies Director John Cavanagh in the organization’s public comment letter. “And yet by abolishing the regulation affirming that tips are the property of the employee who earned them, the Department would make these workers, who are primarily women and people of color, even more vulnerable to exploitation.”

The Economic Policy Institute estimates the proposal would result in employers taking $5.8 billion in tips from workers. This would be a severe blow in an industry where abuse is already rampant. Employers of tipped workers are among the worst offenders in minimum wage violations, especially due to the subminimum tipped wage. Employers who pay a subminimum wage ($2.13 at the federal level) are technically required to ensure that tips bring employee wages up to at least the full minimum wage, but difficulties in enforcement result in high noncompliance rates.

The National Restaurant Association is attempting to frame the proposed rule as an initiative to allow for tip pooling to end pay disparities between the front and back of the house in restaurants. But there’s no guarantee tips stay in the hands of workers — whether they work in the front or the back of the house.

The language in the proposal suggests that employers could allocate tips to make capital improvements or lower menu prices, which the Department of Labor claims could have “potential benefits to employees and the economy overall.” This is just “bogus trickledown theory,” IPS Director Cavanagh wrote. “It’s designed to distract attention from a rule that would clearly lead to even more severe exploitation of tipped workers.”

By burying their internal economic analysis, Labor Department officials may have shot themselves in the foot, suggests Judy Conti of the National Employment Law Project. In an interview with the publication Law 360, Conti said the proposal could be “very vulnerable” to a legal challenge if the Labor Department finalizes it without publishing an underlying economic analysis on the costs and benefits.

No Love for Working Families This Valentine’s Day

A Serious Push for Free College in California