The deep and persistent racial wealth divide will not close without bold, structural reform.

The deep and persistent racial wealth divide will not close without bold, structural reform.  It has been created and held in place by public policies that have evolved with time including slavery, Jim Crow, red lining, mass incarceration, among many others. The racial wealth divide is greater today than it was nearly four decades ago and trends point to its continued widening.

In this report, we offer ten bold solutions broken into three categories: Programs, Power, and Process. These solutions are designed to strike at the structural underpinnings holding the racial wealth divide in place while inspiring activists, organizers, academics, journalists, legislators, and others to think boldly about taking on this incredibly important challenge. This summary outlines the ten solutions, gives a snapshot of the latest racial wealth divide data, and offers a warning against false solutions.

The source of the racial wealth divide is grounded in endowment, the unequal and unfair distribution of inherited advantage. Baby bonds, originally conceived by a co-author of this report, Darrick Hamilton, and 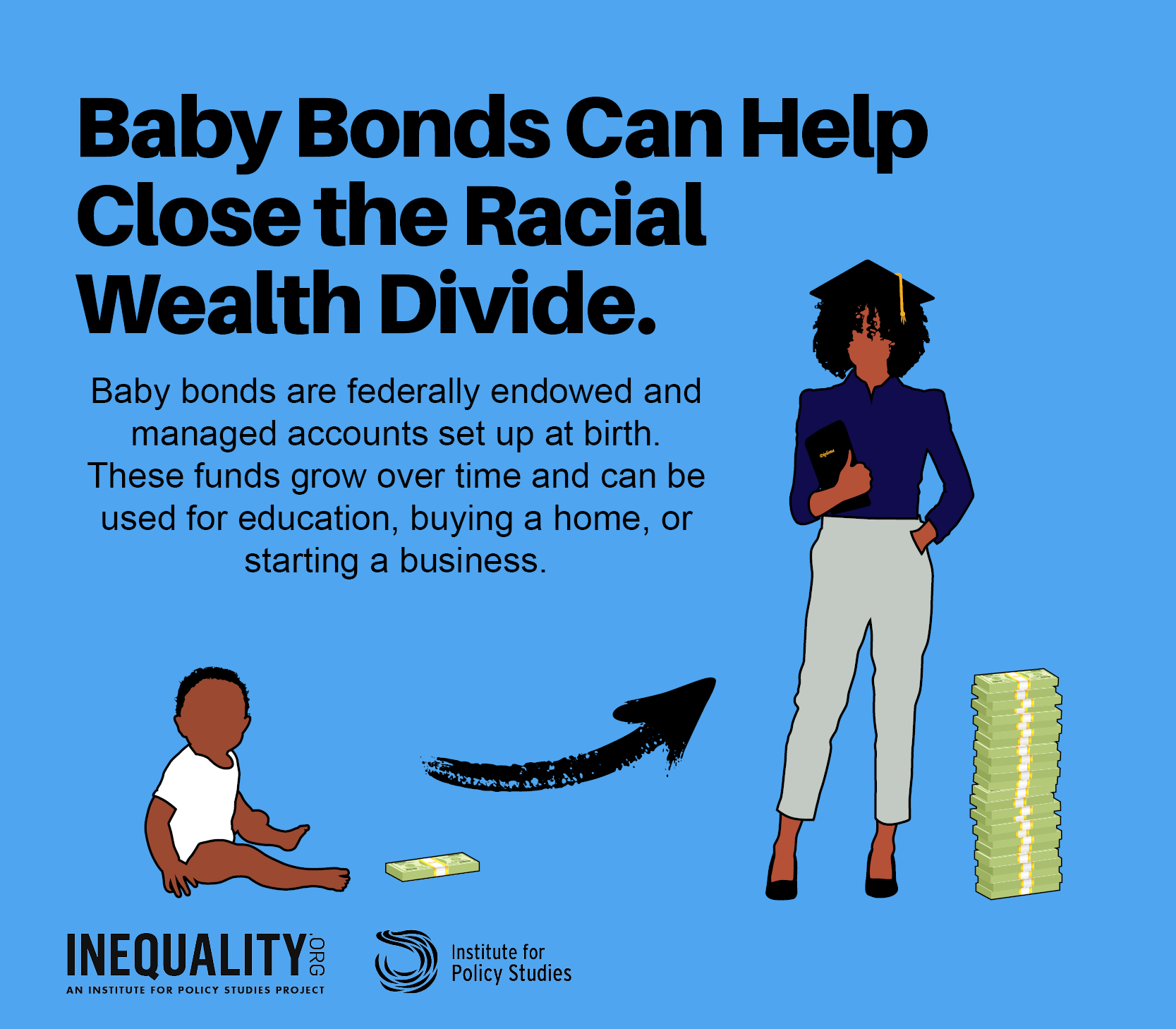 presented in print by Hamilton and William Darity Jr., are an essential program to balancing the historical injustices that created the racial wealth divide. Baby bonds are federally managed accounts set up at birth for children and endowed by the federal government with assets that will grow over time. These funds can be used when the child reaches adulthood for education, to purchase a home, or to start a business. One recent study shows a baby bond program has the potential to reduce the current black-white wealth divide by more than tenfold. Another study shows that had baby bond program been initiated 40 years ago, the Latinx-white wealth divide would be closed by now and the black-white wealth divide would have shrunk by 82 percent.

Black and Latinx workers are twice as likely as white workers to be among the “working poor”, meaning they have a job, but that job doesn’t pay enough to cover basic living expenses.  What is needed is not just more jobs, but more good jobs that pay a living wage for everyone who is able to work. A federal jobs guarantee would provide universal job coverage for all adult Americans and eliminate involuntary unemployment. It would offer existing workers a viable alternative to jobs with low wages, inadequate benefits and undesirable working conditions. Moreover, the work would be used to create and improve our nations physical and human public infrastructure.

The current federal minimum wage is lower than the cost of living in every city in the country. Moreover, at every education level, blacks are often twice as likely to be unemployed compared to their similarly educated white peers. We recognize that income and wealth are conceptually different, and that the racial wealth divide persists through the income distribution. Nonetheless, the income from a federal job guarantee will limit the racially disproportionate exposure to predatory finance (e.g. wealth stripping debt traps) resulting from inadequate income, unemployment and income volatility.

Affordable housing remains out of reach for millions of families. A comprehensive approach like the “American Housing and Economic Mobility Act” is needed to ameliorate historical injustices in housing and to address the current crisis. Perhaps the most direct way the bill works to reduce the racial wealth divide is by including a provision that provides down payment assistance to first-time homebuyers living in formerly redlined or officially segregated areas. Three out of four neighborhoods that were redlined are still low income showing the long-term effect of this policy on cities. Safeguards would need to be considered to avoid moral hazards of subsidizing unintended recipients gaming the policy and hastening displacement of intended recipients via gentrification.

People of color accounted for more than half of the total 32 million nonelderly uninsured in 2016. Poor access to health care and poor health outcomes is inextricably tied to race in the United States. The privatized healthcare system in the United States continues to leave behind millions of families despite progress made by the Affordable Care Act. This deeply unfair and immoral system leaves low-income, low-wealth in the most vulnerable position. The number one cause of bankruptcy is an illness to oneself or a family member. Medicare for All removes the burden and stigma associated with finance at the point of the delivery of medical care.  Medicare for All would guarantee high quality healthcare as a human right not a privilege.

The number of unbanked families remains stubbornly high in this country, with the FDIC reporting that about 10 million American families lack bank accounts. Predatory financial services targeting low-wealth families have thrived due to the lack of competition from a public banking option. People of color are particularly vulnerable to being unbanked, as are rural populations, the very young and the elderly.  The postal service is uniquely positioned to provide essential financial services to these families including short term, low-level loans to address income volatility.

6. Significantly raise taxes on the ultra-wealthy

It is impossible to address the racial wealth divide without breaking up the concentration of wealth at the top. 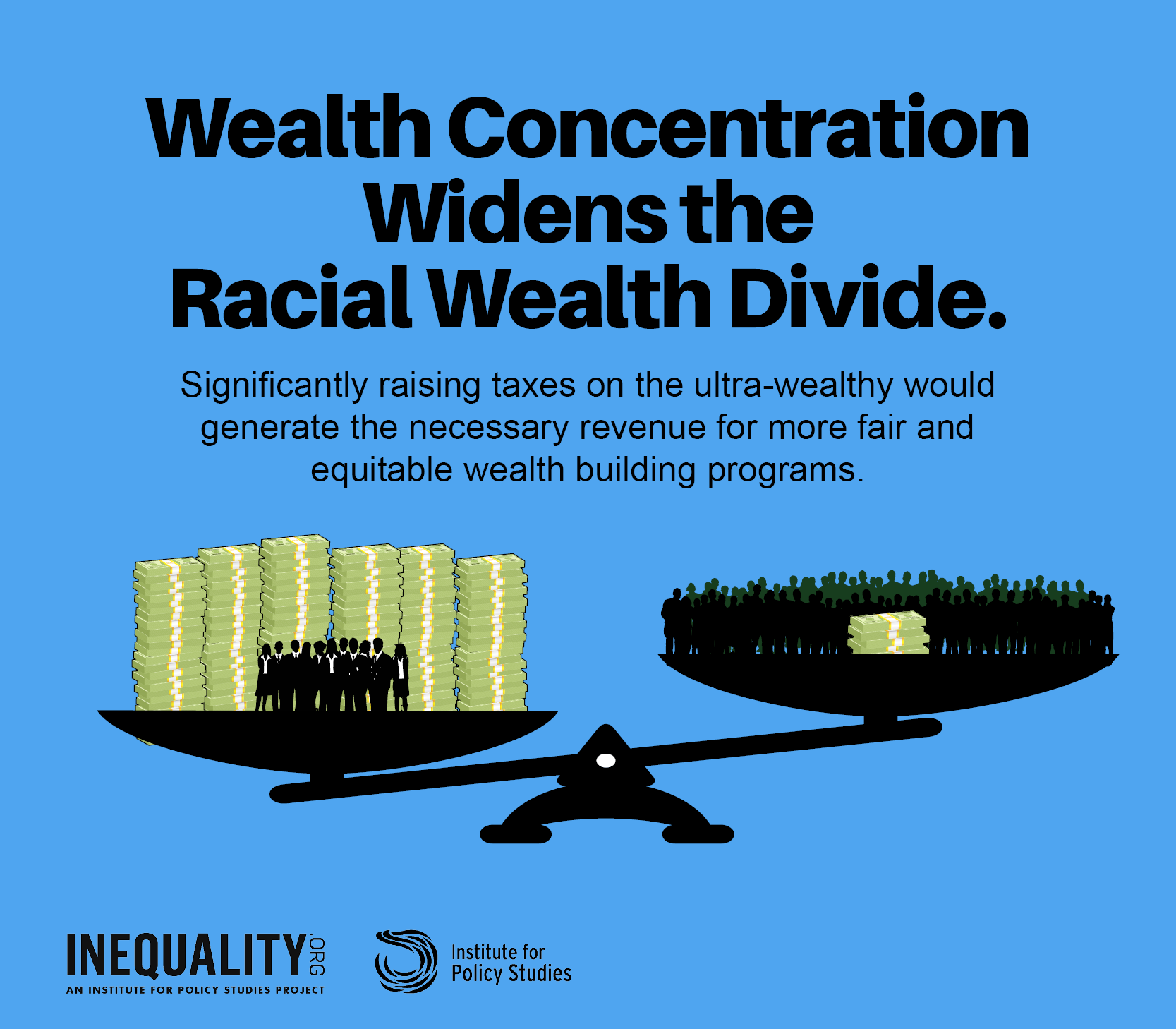 The growing concentration of wealth has translated to a growing concentration of economic and political power by the ultra-wealthy. The tiny group that controls the vast majority of the nation’s private wealth is overwhelmingly white and have been the primary beneficiaries of the past four decades of economic growth and historically low tax rates. Significantly raising taxes on the ultra-wealthy serves both the intrinsic value of reducing the corrupting influence of plutocratic power as well as the instrumental value of producing significant public revenue that can be invested in creating wealth building opportunities for those who have been blocked from generating wealth.

Federal tax subsidies are currently skewed dramatically to ensure the wealthy are able to become wealthier. Shifting these tax expenditures toward wealth-building programs for low-wealth people, particularly those of color, would have a monumental impact in reducing the racial wealth divide and solving economic inequality more broadly.

Congress has considered for decades the topic of reparations, but never created a formal commission to take on the issue or grapple with what it would really look like.  In 2008, the House of Representatives passed a resolution issuing a symbolic formal apology for slavery and Jim Crow. Unfortunately, this resolution did not acknowledge the ongoing injustice created by this history and did not move forward any effort to address this injustice. Legislation like HR 40, championed for many years by now retired Rep. John Conyers (D-MI-13) and currently by Rep. Sheila Jackson Lee (D-TX-18), proposes to create a commission to study the issue and then propose what an apology and policy might look like.

It is difficult to understand the breadth and scope of the racial wealth divide without the necessary data on the full range of racial diversity in the United States. It would be a significant benefit to have local data that includes information on household asset and debt disaggregated by respondent race, ethnicity, tribal affiliation and ancestral origin to provide better insight into the nation’s racial and economic differences.

Analytical tools like the “Racial Wealth Audit” from the Institute on Assets and Social Policy (IASP) and the “Racial Equity Toolkit” from the Government Alliance on Racial Equity (GARE), provide a framework to assess how legislation will widen on narrow the divide. If closing the racial wealth divide is to be a priority, adopting a framework to assess public policy through a racial equality lens is essential to understand the impact and potential unintended consequences of legislation on the racial wealth divide.

Dedrick Asante-Muhammad is the director of the Bridging the Divide project at the Institute for Policy Studies where he is an Associate Fellow. He is also Chief of Equity and Inclusion at NCRC, the National Community Reinvestment Coalition, where he oversees NCRC’s Fair Housing, Fair Lending and Small Business programs.

Chuck Collins directs the Program on Inequality and the Common Good at the Institute for Policy Studies, where he also co-edits Inequality.org. His most recent book is Is Inequality in America Irreversible? from Polity Press and in 2016 he published Born on Third Base: A One Percenter Makes the Case for Tackling Inequality, Bringing Wealth Home, and Committing to the Common Good.

Darrick Hamilton is the executive director of the Kirwan Institute for the Study of Race and Ethnicity at The Ohio State University. In addition, Professor Hamilton holds a primary faculty appointment in the John Glenn College of Public Affairs, with courtesy appointments in the departments of economics and sociology in the College of Arts and Sciences at The Ohio State University.

Josh Hoxie directs the Project on Opportunity and Taxation at the Institute for Policy Studies and co-edits Inequality.org. He has co-authored a number of reports on topics ranging from economic inequality, to the racial wealth divide, to philanthropy.

Please direct all media inquiries to Jessicah Pierre at jessicah@ips-dc.org.

Watch our webinar on why food banks and other nonprofits should support philanthropic policy change — and learn how you can, too.

Where We’re Looking in Times of Crisis

There are plenty of places you can direct your energies to support people taking an economic hit during the pandemic.

A Revolutionary Idea to Close the Racial Wealth Divide