The Illinois state senate is the first legislative body to pass a bill to close a tax loophole that allows billionaire hedge fund managers to pay a lower tax rate than many teachers and firefighters.

As President Trump backtracks on campaign promises to crack down on Wall Street, state-based lawmakers and activists are taking matters into their own hands.

On May 23, the Illinois state senate became the first legislative body to pass a bill to end one of the most outrageous examples of Wall Street privilege – the so-called “carried interest” loophole. This loophole allows private equity and hedge fund managers to claim most of their earnings as capital gains rather than ordinary income, cutting their tax bill nearly in half. This means some of the wealthiest Americans pay a lower tax rate than millions of middle-income workers.

One of the leaders of the Illinois campaign to close the carried interest loophole is Abbie Illenberger of the Grassroots Collaborative, an alliance of 11 membership-based organizations. She explained that the issue gained momentum much more quickly than expected because of the severity of the state’s budget crisis.

“We’ve gone without a budget for two years now,” Illenberger said in an interview with Inequality.org. “That’s two years with little or no state funding for summer jobs, after school programs, youth leadership programs, and street-level violence prevention programs. And at the end of those two years, we are seeing the highest levels of gun violence in two decades. This is not a coincidence.” 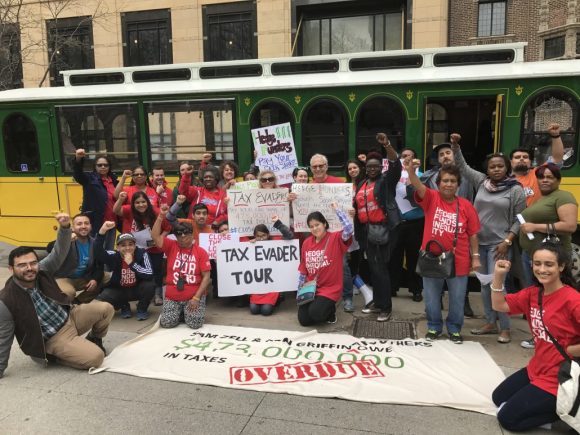 The Grassroots Collaborative organized a “Tax Evader Trolley Tour” in April 2017 that shuttled community residents affected by the state’s budget crisis to the homes of tax loophole beneficiaries, including Ken Griffin of the Citadel hedge fund.

How would the Illinois legislation work? The bill would impose a “privilege tax” at a rate of 20 percent on the fees earned by managers of private equity and hedge funds. According to Michael Kink of the Strong Economy for All Coalition, there are good prospects that a New York carried interest bill could move forward in the near future. Legislators have introduced similar bills in five other states (New Jersey, Connecticut, Rhode Island, Massachusetts, and Maryland) and activists are developing campaigns in several more.

The Illinois legislation states that the tax would disappear if the federal government eliminated the loophole at the national level. Sen. Tammy Baldwin (D-Wis.) and Rep. Sandy Levin (D-Mich.) have introduced bills that would do just that. But the chances of passage in the near future are slim.

On the campaign trail, President Trump promised repeatedly to get rid of the carried interest loophole, saying it allowed hedge fund managers to “get get away with murder.” But now that he’s surrounded himself with Wall Street insider advisors, Trump has issued a tax plan that doesn’t mention this loophole.

As for next steps in Illinois, Illenberger said she expects the bill to pass through the House chamber before the regular legislative session ends on May 31. Then, she foresees a “spirited fight” to get Republican Governor Bruce Rauner, a former private equity fund manager, to sign the bill into law.

Despite the challenges ahead, Illenberger believes an equitable resolution to the state’s economic crisis is almost inevitable. “The current levels of inequality are just wrong and unsustainable,” she said. “If we don’t reverse direction, I don’t know if our society can handle it.”