Last year, Regions Financial CEO O. B. Grayson Hall, Jr. made $12.7 million — 202 times as much as median employee pay at his bank. Those are some big numbers for a firm that stands to benefit from a recently passed senate bill advertised as regulatory relief for small community banks.

The core of the bill is a provision to eliminate most of the risk controls at banks with $50 billion to $250 billion in assets. While not as gargantuan as the likes of JPMorgan Chase or Bank of America, this tier received almost $50 billion in federal bailout money after the 2008 crash, according to Americans for Financial Reform.

In the wake of that disaster, the Dodd-Frank legislation included several executive compensation provisions designed to curb the reckless greed that led to the crash. While several of these provisions have not yet been implemented, one is just now beginning to bear fruit in the form of new data on CEO-worker pay gaps.

All large U.S. publicly held corporations are now required to report the ratio between their CEO and median worker pay in their annual proxy statements. The size of these gaps is one indicator of excessive compensation that can encourage risky behavior. 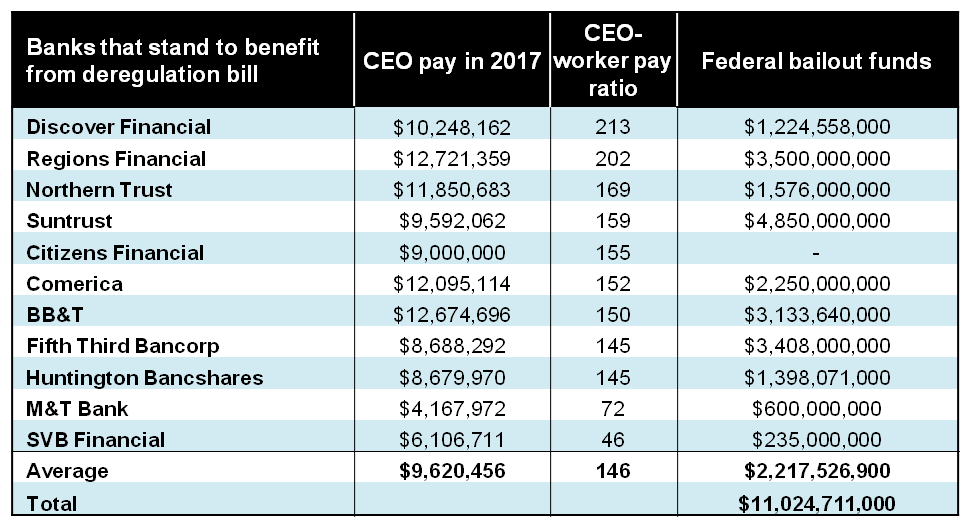 Of the 19 U.S. publicly held banks in the asset range that would benefit from the senate bill, 11 had reported their ratios as of March 16. The numbers make clear these are hardly Mom and Pop operations.

Background on the disclosure regulation and next steps

Removing risk controls from banks that award massive executive pay packages shows just how little was learned from the 2008 crisis. Don’t any of this bill’s supporters remember Countrywide Financial, for heaven’s sake? That bank would’ve fallen into this mid-size range. And yet Countrywide CEO Angelo Mozilo played an over-sized role in driving the subprime-mortgage craze.

And what drove Mozilo’s dangerous behavior? Gee, could it have had anything to do with the more than half a billion dollars he raked in before the bubble burst?

Stock-based pay makes up the bulk of CEO compensation packages. And so if they can jack up the value of their company’s shares, their paychecks will also expand. Having such massive jackpots sitting on the table, with little or no downside risk, gives bank executives a powerful incentive to make outrageous gambles that put us all in danger.

At Bear Stearns, for example, the top five executives used high-risk investments in mortgage-backed securities to inflate the value of their stock grants to $1.1 billion before the firm went down in flames, setting off the meltdown that eventually threw millions of homeowners into foreclosure.

The firms that stand to benefit from the senate bill, which passed on Mach 14 with strong bipartisan support, are not as big as Bear Stearns was at the height of the bubble. But they clearly pose serious risks to taxpayers and our broader economy. The Congressional Budget Office has clearly warned that the bill would significantly raise the risk of future taxpayer bailouts.

And don’t be fooled by arguments that bankers learned their lessons from that crisis. A 2015 University of Notre Dame survey of more than 1,200 bankers found that a quarter of them would break the law in order to make an extra $10 million. A full 32 percent of those with less than 10 years’ experience would take the same risk.

We need to do much more to crack down on Wall Street pay — starting with the Dodd-Frank ban on compensation that encourages inappropriate risk. Nearly eight years after passage of this financial reform law, this ban has still not been implemented.

The last thing we need is to weaken oversight over overpaid banking executives.

Unfortunately for the immediate future, the best we can hope for is political gridlock. Key House Republican leaders have made clear they’re not satisfied with the senate approach. They want to do much more to roll back controls on their friends in the financial industry.

Note: This commentary was updated on March 16, 2018 to reflect just-released pay ratio data.

To Save Humanity, We Could Fight Inequality. Or We Could Go Bar-Hopping on Mars.