Raising Up Black Immigrants in the DACA Debate

By canceling a program that grants work permits and deportation protection for undocumented immigrants who came to the United States as children, the Trump administration has upended the lives of roughly 800,000 young people.

Mexicans make up the vast majority of these Deferred Action for Childhood Arrival (DACA) program recipients. But thousands of young black immigrants also stand to lose their protected status — and the challenges they face are often overlooked in the immigration debate.

The Black Alliance for Just Immigration (BAJI) has been working since 2006 to shine a spotlight on the black undocumented population and to fight the structural racism that sucks them into the criminal justice system in disproportionate numbers. According to BAJI, black immigrants make up just 5 percent of the overall immigrant population, but 21 percent of those who are deported as a result of criminal contact. 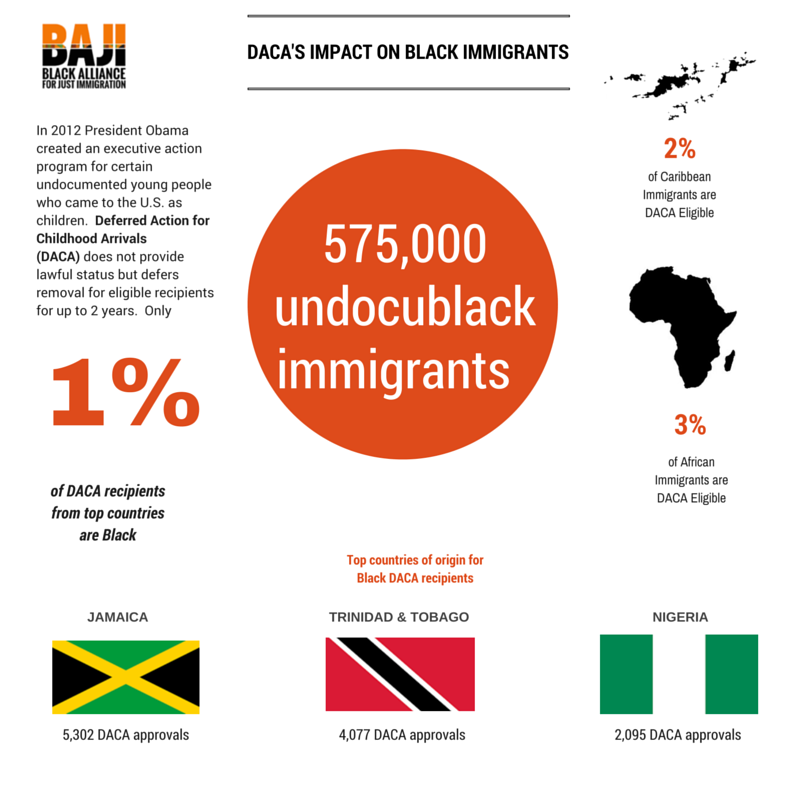 BAJI executive director and Black Lives Matter co-founder Opal Tometi is herself the daughter of Nigerian immigrants who were subjected to racial profiling in their adopted state of Arizona. In response to the DACA rollback announcement, she stated, “By canceling the program, President Trump is yet again pandering to white supremacists over immigrant, Black, and poor communities, as well as millions of organizations, businesses, and allies that support DACA recipients.”

Tometi will speak about BAJI’s efforts to defend black undocumented immigrants at a September 21 event in Washington, D.C., where she will receive the prestigious Letelier-Moffitt Human Rights Award. The Institute for Policy Studies hosts the awards program every year to honor two IPS colleagues who were assassinated in the U.S. capital in 1976 by agents of the Chilean dictatorship.

By canceling DACA, "President Trump is yet again pandering to white supremacists over immigrant, Black, and poor communities."

In addition to lifting up black perspectives in the DACA fight, BAJI is also a leading voice in the effort to protect Haitian immigrants from losing their Temporary Protected Status (TPS), the special humanitarian relief granted after the country’s devastating 2010 earthquake. The Trump administration has been sending strong signals that it plans to end the program in January 2018.

In a commentary for TIME in May, Tometi explained that this would mean around 50,000 Haitian immigrants would be sent back to their home country, which lacks the physical and social infrastructure to accept these new arrivals.

Tometi pointed out that Trump officials appeared to be building their case for ending the TPS program “based on a ubiquitous, racist stereotype of Black migrants in particular — the myth of the Black criminal.”

According to emails leaked by the Associated Press, the Department of Homeland Security has been searching for evidence of criminal convictions of Haitian immigrants as part of the process for determining the future of the TPS program.

“While the Trump administration has vitriolically targeted Black people and immigrants with policies that will likely expand mass criminalization,” Tometi wrote, “the request for criminal data for a specific ethnic community is unorthodox.” Haiti, with an overwhelmingly black population, is the poorest country in the Western Hemisphere and among the poorest in the world. Migrants from other, wealthier countries that have benefited from the TPS program have not been subject to such scrutiny.

She called on DPS to “fundamentally alter its perception of Haitians as criminals and instead implement long-term programs that allow Haitian families to live and thrive in the United States.”

Tometi’s long-term vision includes building a global Black Lives Matter movement that can unite forces across borders to fight structural racism and oppression. “We have a transnational commitment,” she told journalist Laura Flanders in an interview. “We live and work here but we have family in other countries. And so there’s a natural inclination to keep in touch with our families and politics on the ground in other countries. We look at the history of transnational corporations and policies like NAFTA that have devastated our communities at home and abroad” and we know we have to unite behind a bold agenda for change.

Tometi and BAJI will be working to turn the immediate immigration battles with the Trump administration into opportunities for drawing attention to the root causes of migration in ways that can build international solidarity.

This Black Alliance for Just Immigration video, "The Real Crime," exposes the structural racism behind the mass incarceration and detention of people of color, including immigrants.

Tax Cuts for the Rich Help the Rich, Not You