Amidst compromise negotiations over President Biden’s infrastructure proposal, hundreds of low-wage workers, faith leaders, and advocates from Kentucky and West Virginia joined the Poor People’s Campaign for a Moral March on Manchin and McConnell.

“I stand here representing the 770,000 poor and low-income workers in my state of West Virginia, one of the poorest states in the country,” said Pam Garrison, a retired retail cashier and current member of the Poor People’s Campaign West Virginia chapter.

“We are the people. Why is it that the only time compromise is mentioned is when it’s something to help the people? I never heard of compromise when the rich were getting their tax breaks.”

The rally targeted Sen. Joe Manchin (D-WV) and Senate Minority Leader Mitch McConnell (R-KY) — two key opponents of the For the People Act, a sweeping voting rights and campaign finance reform bill that passed the House back in March.

Faced with intense pressure from democracy advocates, Manchin remained critical of some provisions of the bill but joined all other Democrats in a procedural vote to allow a final Senate debate and vote on the measure on June 22. But without a single Republican supporter, the For the People Act went down via filibuster.

The Poor People’s Campaign action, which ended in arrests following an act of civil disobedience, showed that this critical fight is not yet over.

The For the People Act — which would restore voting rights to millions of formerly incarcerated individuals, mandate safeguards for voters who lack identification, and prohibit voter intimidation among other issues — also addresses deep inequalities that impact U.S. democracy. 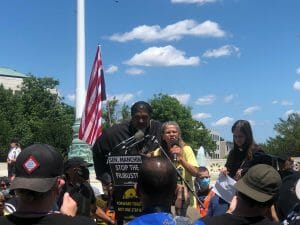 “The For the People Act would blunt the political effects of wealth inequality,” said Poor People’s Campaign co-chair Rev. William Barber II, referring to the bill’s restrictions on dark money and super PACs. “Who would block this unless they were more committed to the U.S. Chamber of Commerce than the U.S. Constitution?”

Many of the attendees remain outraged that Manchin, McConnell, and other lawmakers blocked a federal minimum wage hike from the March 2021 Covid relief bill and are continuing to pressure their elected officials to take action.

“When they stripped the $15 minimum wage out of the American Rescue Plan, they cut the package in half. That would have benefited us, the rescuers,” said Garrison, who made $8.50 an hour working a minimum wage cashier job in West Virginia.

An increased minimum wage is part of the sweeping Congressional resolution for a “Third Reconstruction,” proposed by the Congressional Progressive Caucus with the support of the Poor People’s Campaign.

The resolution includes a long list of proposed economic policies focused on eradicating poverty and sharply reducing racial and economic inequality. It includes a federal jobs program to build up climate resilient public infrastructure, universal health care and paid leave, raising the minimum wage to a living wage, and guaranteeing the right to form and join unions.

For the Poor People’s Campaign, this current moment must be met with swift, bold action, not compromise and capitulation.

“We don’t need an insurrection, we just need a nonviolent, moral mobilization and direct action,” Rev. Barber said. “We need to fight until hell freezes over and then fight on the ice […] Do what’s right for the American people, and do it for poor and low-wealth people, and do it now!”

Peter Thiel’s $5 Billion Roth IRA: Only the Size is News