Spotted: A Piketty Reference on Hulu

The French economist's groundbreaking book on inequality is found on the bookshelf of a character from "The Handmaid's Tale."

It was there, on the bookshelf, for a split second. French economist Thomas Piketty’s groundbreaking book about inequality, Capital in the Twenty-First Century.

I was watching the third episode of season three of The Handmaid’s Tale, based on Margaret Atwood’s novel. The male leaders of dystopian Gilead are gathered at the home of Commander Joseph Lawrence, played by Bradley Whitford. He is so important that they come to his house.

Lawrence asks his handmaid, Ofjoseph, played by Elisabeth Moss, to retrieve a copy of Charles Darwin’s Descent of Man from his bookshelf.

There is a quick camera scan of Lawrence’s bookshelf. I backed up in the Hulu stream to snap the photo below. No doubt about it. It is Capital. 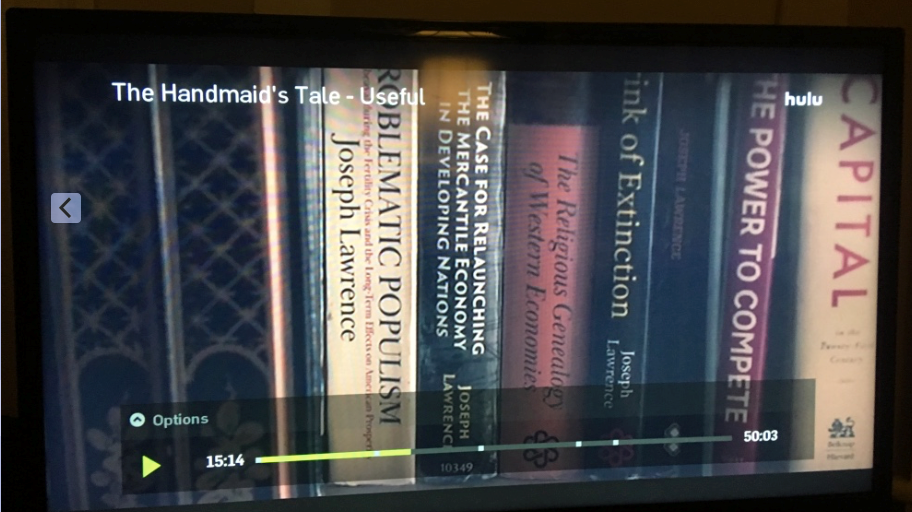 Now we don’t know what to make of Commander Lawrence. On the one hand, he’s one of the most intellectual architects of the horrific theocratic Gilead and, as revealed in an earlier episode, is the founder of the Colony system. Many reviewers are puzzled by Lawrence.

But Commander Lawrence also helped Elisabeth Moss organize the escape of her baby with Emily. He looked the other way as the Marthas – the domestic workers in the employ of elite families – ran a resistance operation out of his house. And he doesn’t participate in the ritual abuses.

So who is Commander Lawrence? Even Bradley Whitford, the actor that plays Lawrence, finds his character to be an enigma. “I think Lawrence is a guy with a big brain that has obliterated his humanity,” Whitford tells The Wrap.

One clue may be what is on his bookshelf. Turns out most of the books we see are by Joseph Lawrence himself. They include books with the titles:

And there’s Capital in the Twenty-First Century, the most important book about inequality in our lifetimes. Hmmm. Let’s keep a close eye on Commander Lawrence.

Chuck Collins directs the Program on Inequality and the Common Good at the Institute for Policy Studies, where he also co-edits Inequality.org. He is co-author, with Bill Gates Sr., of “Wealth and Our Commonwealth.”

In New York, and Beyond, Our Plutocrats May Need a New Playbook

Racism as a Public Health Crisis