Going After the Pain Profiteers

A labor leader whose son was a victim of the opioid epidemic has inspired a campaign to crack down on irresponsible drug industry CEOs.

Travis Bornstein never told his friends about his son Tyler’s drug problem. He was too embarrassed.

Then, on September 28, 2014, Tyler’s body was found in a vacant lot in Akron, Ohio. The 23-year-old had become addicted to opioid pain killers after several sports-related injuries and surgeries. Unable to afford long-term treatment, he ultimately turned to a cheaper drug — the heroin that killed him.

“Now I have no choice but to speak out,” the elder Bornstein, president of Teamsters Local 24 in Akron, told a crowd of thousands at the union’s convention in July 2016. As he proceeded to share the unvarnished tale of how a middle class, star athlete had wound up in that vacant lot, Bornstein lit a fire under the 1.4-million-member organization.

Right there on the convention floor, rank-and-file Teamsters spontaneously began gathering donations for a nonprofit organization the Bornstein family has established, Breaking Barriers — Hope Is Alive, to expand drug treatment in Ohio. Eventually, the union and its members pledged $1.4 million. 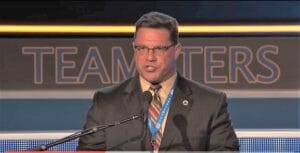 Travis Bornstein, delivering the speech that inspired the Teamsters union to action on the opioid epidemic. Photo: Teamsters.

According to the Centers for Disease Control, the number of overdose deaths involving opioids (including prescription drugs and heroin) has quadrupled since 1999. In 2015, opioid deaths in the United States hit a record-breaking 33,000.

On March 2, the Teamsters held a rally outside the annual shareholder meeting of one of these wholesalers — AmerisourceBergen — demanding that the company take responsibility for their role in the epidemic and conduct a full investigation of their distribution practices. According to a Charleston Gazette-Mail investigation based on U.S. Drug Enforcement Administration documents, AmerisourceBergen delivered 118 million opioid pills to West Virginia pharmacies over a six-year period (2008-2012). During that timeframe, 1,728 people in the state overdosed on the painkillers.

Altogether, drug wholesalers shipped 780 million hydrocodone and oxycodone opioid pills to West Virginia in just those six years — 433 for every man, woman and child in the state.

In January 2017, AmerisourceBergen paid $16 million to settle a case brought by West Virginia over their negligence. But the company’s CEO, Steven Collis, has not coughed up a penny of the tens of millions of dollars in compensation he pocketed as the firm was reaping opioid windfalls. The Teamsters are demanding that some of his pay be “clawed back,” in the same way that Wells Fargo executives involved in last year’s bogus account scandal had to forfeit some of their compensation.

“When it comes to the role of drug distributors fueling the nation’s opioid epidemic, West Virginia is the canary in the coal mine,” Ken Hall, international secretary-treasurer of the Teamsters union told the Charleston Gazette-Mail. “The [AmerisourceBergen] board cannot afford to let management sweep this issue under the carpet with ad-hoc settlements, but must rather undertake a thorough investigation of the company’s sales practices, compliance programs, and senior executives who dropped the ball.”

Drug distributor CEOs have not paid back any of the compensation they pocketed as their firms reaped opioid windfalls.

The Teamsters have made similar demands on McKesson, where CEO John Hammergren has taken in an astounding $368 million in compensation, including stock-based pay, over the past five years. In January 2017, McKesson settled a U.S. Department of Justice case over their drug distribution practices for $150 million. The firm also faces a case brought by West Virginia, accusing McKesson of “illegal and reckless and malicious action” in flooding the state with opioids.

Part of the problem with accountability at McKesson, according to the Teamsters, is the fact that Hammergren serves as both CEO and Chairman of the company. The union is filing a shareholder resolution this year urging the board to adopt a policy requiring the chair to be an independent director who has not previously served as a McKesson executive.

Thus far, all of the drug wholesalers have denied any wrongdoing, pointing the finger instead at corrupt doctors and pharmacists who sell pills to addicts and dealers. But as West Virginia Governor Earl Ray Tomblin told the Charleston Gazette-Mail, “Obviously, they had to know, with a state this size, and that many pills coming in, that something wasn’t right.”

Meanwhile, Travis Bornstein is continuing to speak out, telling his son Tyler’s tragic story to students, policymakers, and others as he works to expand the availability of drug treatment for communities ravaged by the opioid crisis.

Since Tyler’s death, he has learned that opioid addiction is not a moral failure, but rather a disease, like cancer or diabetes. “Now my son is my hero for everything he was able to accomplish with such a gut-wrenching disease,” Bornstein said. “I was the fool.”

Has America Become Too Generous?