Marcus Raskin on Inequality and the National Security State

The Institute for Policy Studies Co-founder long warned of the web of war institutions that would drive conflict abroad and economic disparities at home.

Institute for Policy Studies Co-founder Marcus Raskin will be remembered, among many other noteworthy achievements, for coining the term “national security state.” In congressional testimony in 1967, he used the phrase to describe the complex web of war institutions he feared would drive continuous conflict abroad while turning the United States into a “garrison and launching pad for nuclear war.”

Raskin died on December 24, 2017, at age 83 — just as the current President of the United States was about to make nuclear threats via Twitter. And as for his fears about the country becoming a garrison, Raskin wasn’t far off. Over the five decades since Raskin’s testimony, the number of inmates in U.S. state and federal prisons grew from 188,000 to 1.5 million, with the vast majority of them poor and people of color.

While progressive activists have tended to treat these issues separately, Raskin consistently connected the dots between America’s military adventures overseas and economic and racial injustice at home.

In a 2008 book with Robert Spero, for example, he used President Franklin Delano Roosevelt’s “four essential human freedoms” as a clever frame for exposing the extent to which the national security state had accelerated poverty and inequality while undermining other basic rights.

After the Soviet Union's collapse, “people at the top no longer had to concern themselves with the people at the bottom.”

Marcus Raskin and Robert Spero, The Four Freedoms Under Siege: The Clear and Present Danger from Our National Security State (2006)

In Four Freedoms Under Siege, Raskin and Spero concede that the Cold War superpower rivalry did contribute to some progress towards Roosevelt’s dream of freedom from want. Raskin was a young aide in Kennedy’s National Security Council during a period of high tensions between the United States and the Soviet Union that were playing out with deadly consequences in Cuba, Vietnam, and elsewhere.

And while he was horrified by the existential threat posed by the superpower standoff, Raskin later recognized that the competition with the Soviet Union did give a boost to the U.S. labor unions and other forces that were pushing for progressive economic reforms.

The elites, Raskin and Spero explained, feared that movements for “social and economic justice, from rhetoric to out-and-out radicalism, would transform the power structure in such a way as to open up the society to democracy that displaces overlapping economic oligarchies. The Right, especially big business, also feared that this would be just the prelude to the redistribution of resources, or at least access to them.”

After the collapse of the Soviet Union, Raskin and Spero point out, “people at the top no longer had to concern themselves with the people at the bottom.” And the permanence of the national security state obliterated any hope of a post-Cold War “peace dividend” that could’ve helped realize FDR’s dream of freedom from want.

Raskin and Spero wrote their book during the militarily aggressive administration of President George W. Bush. As Halliburton and other private military contractors lined up to feed at the Iraq War trough, the period perfectly illustrated the danger of a War Economy without end.

“This kind of ‘let ‘er rip’ corruption policy did not originate with Bush II conservatives,” Raskin and Spero wrote, “but they pushed the idea of a corporate controlled state to the limit as a partner to military expansion.”

In his final weeks, Marc Raskin was excited to learn about plans for a Poor People’s Campaign that, like his own work, will take on the inter-connected problems of the War Economy, poverty, racism, and ecological devastation.

The campaign will mark the 50th anniversary of a similar effort led by the Rev. Dr. Martin Luther King, Jr. and other leaders who saw the need to build on the civil rights cause by tackling the militarism that had led to the Vietnam War and the poverty that plagued too many Americans of all races. Back then in 1968, Institute for Policy Studies staff included leaders of both the civil rights and anti-Vietnam War movements. Raskin himself was indicted that year for conspiracy to aid resistance to the draft. 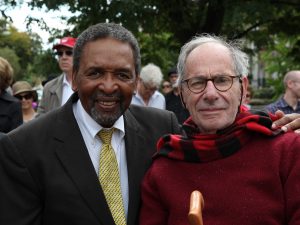 Marcus Raskin (right) with Frank Smith, 2015. Smith, a former SNCC organizer, was one of the civil rights activists working at the Institute for Policy Studies in 1968.

The new Poor People’s Campaign, led by two prominent faith leaders — the Rev. Liz Theoharis and the Rev. Dr. William J. Barber II — held a kick-off event in Washington on December 4. The Institute for Policy Studies prepared a report for the launch that includes data on each of the campaign’s focus areas. Theoharis and Barber announced plans for a historic 40-day wave of civil disobedience across the country in the spring of 2018, culminating in a mass demonstration in the capital in June.

At a December 12 follow-up meeting at the Institute for Policy Studies, Raskin asked one of the lead organizers of the new Poor People’s Campaign who they expect to be their strongest opponents. From his six decades of experience in Washington, he had a keen sense of the challenges ahead.

Sarah Anderson directs the Global Economy Project at the Institute for Policy Studies and is a co-editor of Inequality.org. @Anderson_IPS.

The Free Market Made Us Do It!

Help For Struggling Millionaires Is On the Way