Should cities build new fossil fuel pipelines to power skyscrapers for the super-rich?

As hurricanes and typhoons slam into the Southeastern US and the Philippines, there is growing focus on how climate disruption is contributing to more powerful storm surges.

Even as President Trump pulls the U.S. back from the Paris global climate accord, many states and cities have stepped forward to keep faith with the emission reduction goals. Mayors and governors are gathering this week in San Francisco’s Global Action Climate Summit, convened by California Governor Jerry Brown. The governor signed legislation earlier this week to make California transition entirely to carbon-free energy by 2045.

But a luxury housing boom, powered in part by trillions in global investment capital, is now threatening to upend the ability of many cities to reduce their carbon emissions. Cranes are rising across North American cities, a sign of an unprecedented building bonanza of skyscrapers for the wealthy. Many of these properties, with condominiums starting at $2 million, are not net-zero-carbon buildings and require new fossil fuel infrastructure to power.

Wealthy investors, those who hold an increasing share of the planet’s wealth, are seeking safe havens to invest their wealth and preserve its value. With anticipated volatility in the stock market, there are few better wealth storage units than real property in the U.S. and Canada.

In a report I co-authored, Towering Excess, I examine the perils of Boston’s luxury building boom in terms of its impact on inequality, affordable housing, and the increasing risks of illicit funds and money laundering. The report received extensive coverage in The Boston Globe and other regional media, touching a nerve about inequality and housing displacement. These trends are also part of a global hidden wealth problem, as ultra-high net worth individuals seek to shelter wealth from taxation and mask illicit activities.

But the way these properties increase carbon emissions and require the construction of new fossil fuel infrastructure has been overlooked in the coverage.

Many of Boston’s new luxury buildings, for example, are energy hogs, failing to live up to state-of-the-art energy efficiency standards.

“Not only are these developments magnifying racial and class disparities by escalating the cost of land and housing in these neighborhoods, they are also so grotesque in their consumption of resources,” said Professor Daniel Faber who directs the Environmental Justice Research Collaborative at Northeastern University.

“This luxury boom threatens to drive up energy, infrastructure, and congestion costs for all of Boston’s low-income and middle class residents. To build energy inefficient and resource-hungry buildings in a city that is increasingly vulnerable to the impacts of climate change is unconscionable, and further imperils the future of the city,” said Faber.

The city’s tallest luxury residential tower, One Dalton Place, is currently under construction in Boston’s Back Bay neighborhood. It will rise 61 stories and offer condominiums for $6 million and up, with a penthouse selling for over $40 million. But One Dalton is not a green building and its construction has been used to rationalize the expansion of fossil fuel infrastructure.

The regional utility National Grid is busy extending its northeast pipeline system to transport fracked natural gas from the Marcellus Fault region of Pennsylvania, primarily for global export. While the city’s gas demand has not grown for several years, Boston’s future luxury buildings are being used to justify charging local utility customer ratepayers for their pipeline construction projects. One Dalton has used its political clout to get National Grid to construct a new 4,900-foot gas pipeline but wants other ratepayers to share in the cost.

By fast-tracking this high-end housing boom, the city of Boston is undercutting its own greenhouse gas reduction commitments. Boston is highly vulnerable to sea-level rise and storm surges as the earth warms and weather systems become more volatile. Yet one of the sites of the city’s largest luxury growth surge, the Seaport District, is among the most susceptible to rising seas.

“The vast majority of residents in both the South End and Back Bay are thinking about coastal flooding,” observed neighborhood activist Claire Corcoran, speaking out in opposition to pipeline at a public hearing in January 2018. “We live at sea level. We just had catastrophic flooding last week downtown and we are seeing the maps that the city is producing and it’s coming for us. We don’t support fossil infrastructure in our community.”

Massachusetts State Attorney General Maura Healy filed a brief in January 2018 recommending that the state’s Department of Public Utility reject the Special Contract being negotiated between National Grid and One Dalton Place. The Attorney General said the contract would “set a precedent that would allow customers with the greatest economic resources to avoid paying their full capital investment obligations and obtain special distribution rates at the expense of other customers.”

“Boston has the opportunity to lead the nation, to show what the new, green economy can be,” said James Michel, co-founder of the Boston Clean Energy Coalition. “Unfortunately we seem stuck with the status quo. Instead of producing state-of-the-art energy efficient structures, we are building gas guzzlers like One Dalton.  We need to do better.”

Climate activists are pressing the city to champion the construction of net-zero-carbon buildings, especially with in the luxury housing sector. All new luxury construction in Boston should meet Net-Zero-Carbon or passive house standards and the city should explore a range of incentives and planning tools to meet this goal. The Boston Clean Energy Coalition argues that “these measures would ensure that Boston’s new buildings would be state-of-the-art in terms of energy efficiency, and save the city’s resources from being spent on future retrofits.”

The boom in luxury skyscrapers shouldn’t jeopardize the lives of people living on the ground.

In a parody video of One Dalton Place’s marketing materials, climate activist John MacGibbon (who goes by the moniker “Angry Liberal Christian”) narrates, “Boston is a hub of innovation on climate change and energy efficiency. So when we decided to build New England’s tallest and most luxurious residential skyscraper, we consulted the area’s top climate researchers for advice. Then, we took our search around the world. We looked at cutting-edge, clean energy technologies. We visited super-efficient skyscrapers in Indonesia and Dubai. And we rejected everything we learned, so we could bring you a masterpiece of conspicuous energy consumption.” 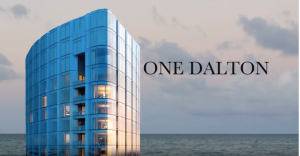 A parody One Dalton with rising seas.

“One Dalton: celebrate your success by consuming enough energy to power a small chowder factory,” says the One Dalton parody video.  “You’ll bask in cozy luxury while enjoying spectacular views of the Category 5 hurricanes battering Boston Harbor… Even on the hottest days, our powerful air conditioning system will keep you comfortable enough to enjoy your laser ignition gas fireplace.”

Does the United States Have a ‘Strong’ Economy?