Building a Labor Movement for the 21st Century

As the Supreme Court prepares to hear a landmark labor case, workers across the United States rally to show their collective power and demand an end to the rigged economy.

Workers and activists around the United States gathered this past Saturday, just days before the Supreme Court began hearing arguments in a landmark labor case, to demand an end to the rigged economy that allows the wealthy and corporations to have an outsized impact on policies that affect working people.

The latest example of this rigged economy? Janus v. AFSCME — a case currently before the Supreme Court that could change the way public sector unions in the United States operate. In 1977, the court ruled that public sector unions can compel non-union employees to pay what’s known as “fair share fees.” These fees, a partial cost of what union members pay, help defray the costs of collective bargaining that helps all workers, regardless of whether or not they belong to the union. Now, Mark Janus, an Illinois state employee, is challenging that decision with the backing of the National Right to Work Committee.

While Saturday’s events, dubbed the Working People’s Day of Action, are a direct response to the case, organizers also know that it’s only the latest in an onslaught of attacks against working people. “It would be silly to pretend we weren’t purposely doing these actions on the eve of the opening of arguments of the Janus court case,” Erica Smiley, the organizing director of Jobs With Justice, told Inequality.org ahead of the day of action. Jobs With Justice was one of the rally’s organizing partners.

“But, at the same time, this is a much more prolonged effort and opportunity to popularize and expand the idea that in order to have a working democracy, working people have to be able to collectively come together to negotiate for themselves over the conditions in their lives.”

The conditions Smiley mentioned aren’t strictly in the workplace. While most of the rally attendees in Washington, D.C. were focused on the next steps for the labor movement, the first thing Felicia Dantzler mentioned to Inequality.org was the absurd cost of living in her hometown. Dantzler decried the fact that she couldn’t afford to live within the district boundaries, where she grew up, despite making nearly six figures. But as the president of AFSCME Local 2743, she’s also concerned about the impact the court case will have on her directly. “We want the powers that be to know that we care,” she said. 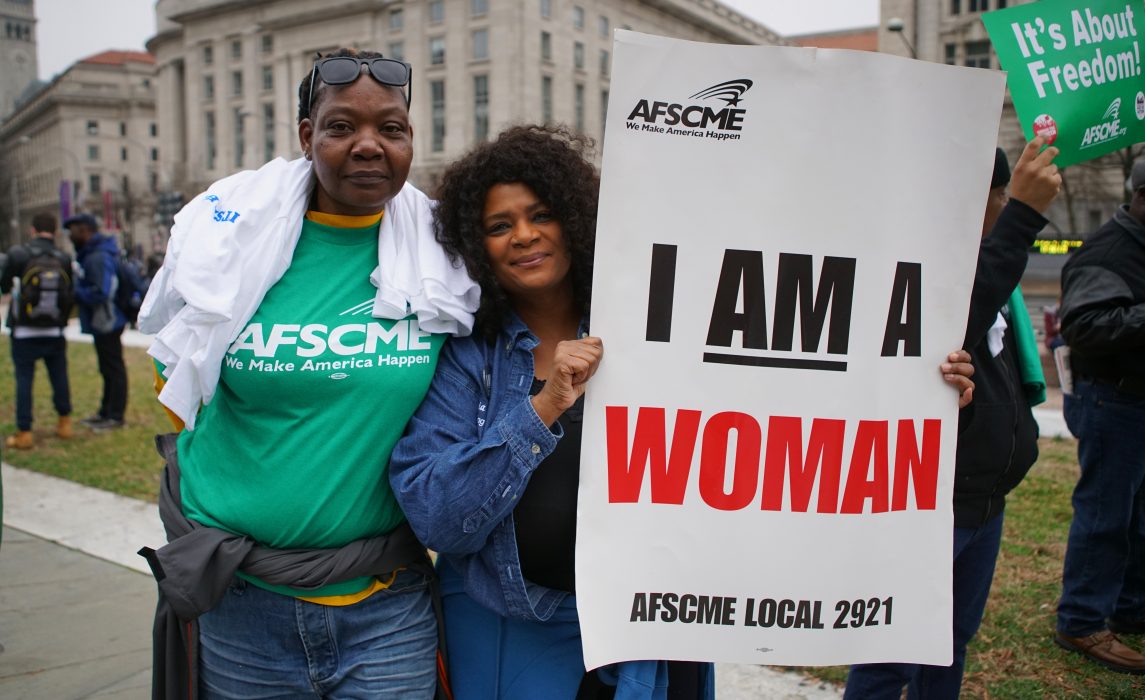 Debra Walker, president of AFSCME Local 709, felt the same way. “I’m out here fighting for my workers’ rights,” she said. “You’re getting the same rights that we do when you don’t want to contribute,” referring to non-union workers who benefit from collective bargaining but feel they don’t need to pay fair share fees.

“If Mr. Janus doesn’t like the pay and the benefits and the rights that he has negotiated by his union, then why doesn’t he try working in a non-union workplace and leave us alone?” AFL-CIO Secretary-Treasurer Liz Shuler roared onstage, to much applause from the crowd. “If we show that the labor movement is the best way to make change, the best way to bring people together for a voice, and we make ourselves essential to everyone’s lives, they’re going to want to join unions, and Janus will be irrelevant.”

That was a clear message throughout the day: organizing is the key to winning, especially considering the resources of the other side. The Janus case is the third attempt in recent years to challenge the constitutionality of fair share fees. Conservative groups are able to continue pushing case after case to the Supreme Court with the help of a slew of legal foundations backed by ultra wealthy donors.

At first glance, Janus v. AFSCME may seem to only impact workers who belong to public sector unions. But Smiley cautioned that the effects of overturning fair share fees would have a far reach. Those workers, she said, “are on the frontline of attacks that will ultimately snake their way around to all of us.” She says that’s why organizers widened the rally beyond the sphere of public sector workers. “We wanted to make sure that we’re seeing this not just as something that other partners are in solidarity with, but are actually seeing this as our shared fight in this moment.”

Speaking at the rally, Pennsylvania Governor Tom Wolf echoed that the court case could have wide implications. “We’ve got to recognize that this is a very broad assault on fairness in the United States and we’ve got to resist it,” Wolf told the crowd. “This is bad for every family. It’s bad for all the members of the union who are going to be affected. But it is bad for everybody.” 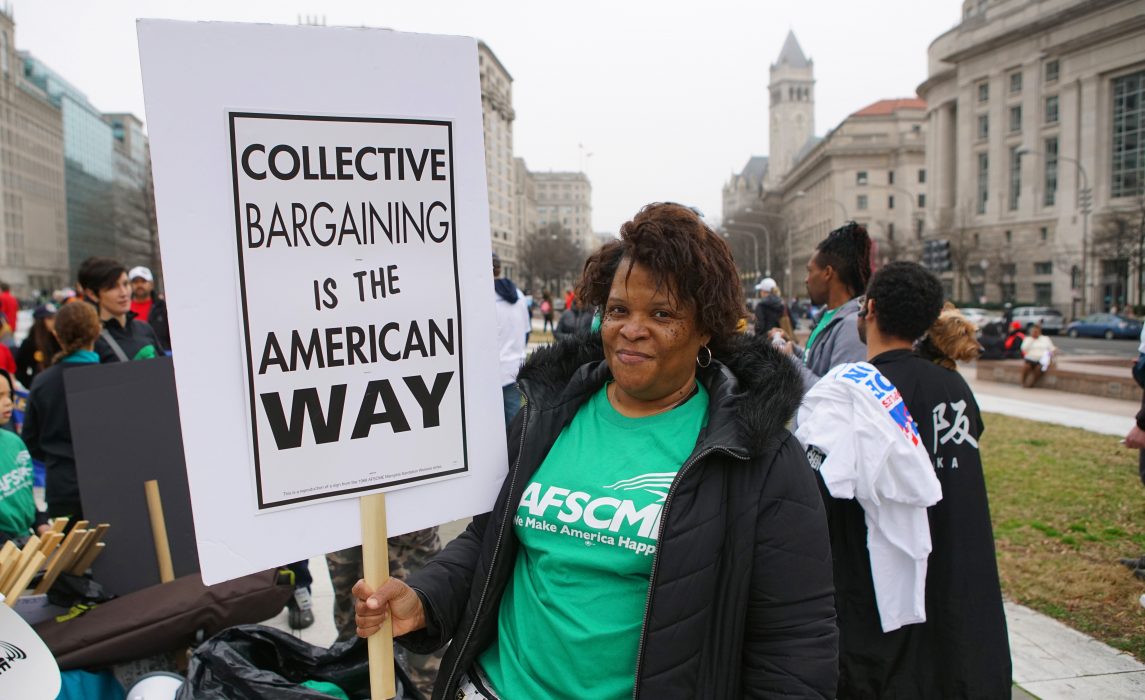 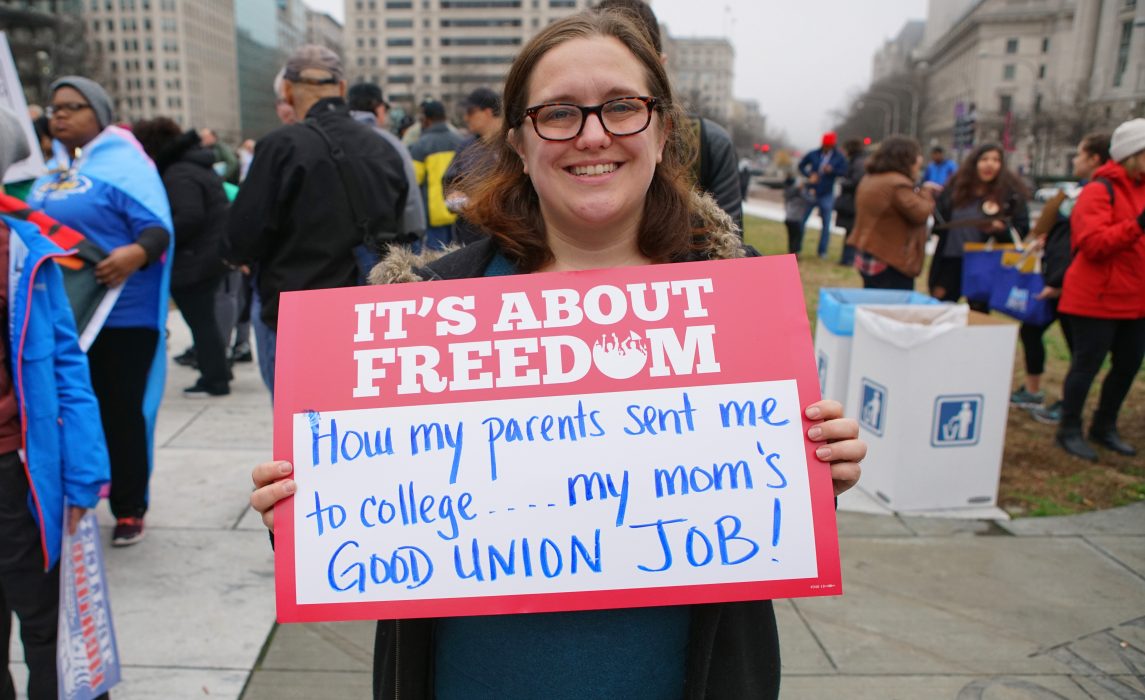 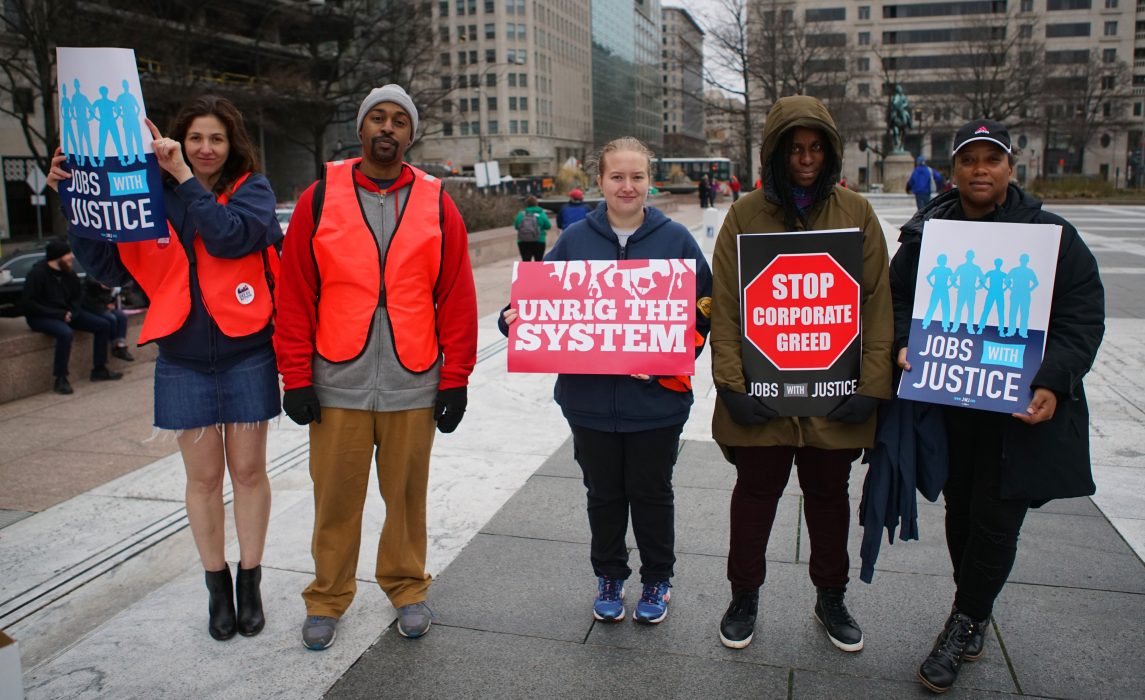 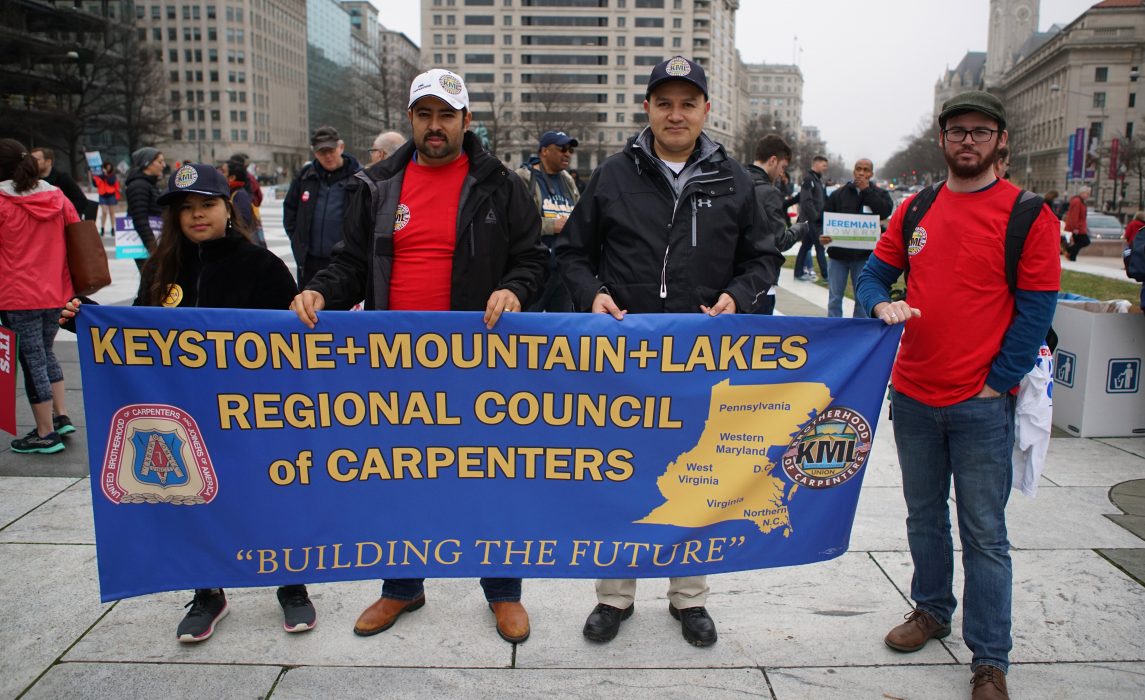 While the effects of the Janus case might be devastating, Smiley scoffs at media outlets and pundits prematurely mourning the labor movement. “The idea that the labor movement is dead, to me, is silly. The labor movement is probably more alive than it’s been in two decades,” she said, encouraging the idea that Saturday’s rally would serve as a kickoff for more efforts to defend working people from the variety of attacks she expects to see from a small, wealthy minority.

“Definitely expect actions that escalate on employers and people we feel are opposing our ability to collectively come together in this moment. Definitely expect the birth and vibrancy of a 21st century labor movement.”

What would that movement look like? Smiley is loaded with examples. The International Union of Painters and Allied Trades, for example, have made supporting their immigrant members a focal point of their organizing. That fight may not just be a moral calling, she says. “They’ve actually realized that in order to continue to build power and to be able to represent painters in this moment, in a way that protects them from the exploitation of those employers, they have to organize differently.”

Organizers are also looking beyond the standard scope of collective bargaining. “We feel that at Jobs With Justice, it’s one thing to defend what we’ve won and the institutions we’ve won. We certainly want to do that,” Smiley said. “It’s another thing to target the overwhelming majority of working people in the country in a way that prioritizes the idea that we should have collective bargaining. You don’t expand collective bargaining powers just by talking to people who have it.”

The Crown Heights Tenant Union in Brooklyn, for example, is bringing the fight for equity directly to people’s doorsteps by working to end displacement and rent overcharges, organizing one building at a time. Then there are the organizers pushing to expand collective bargaining into the gig economy, including workers like Uber and Lyft drivers. Smiley also points to some of the innovative ways to connect workers, citing the WorkIt app from the Organization United for Respect at Walmart, which allows the company’s employees to check up on workplace policies and talk to other workers around the country about their experiences.

While the Janus case is proof that the movement is under attack, these new methods of organizing can still offer a beacon of hope. “Those who are not only trying to save what they have but grow and build a different kind of power in this kind of current economy, it just really matters,” Smiley said. “It’s actually the antithesis to the idea that the labor movement is dying.”

“Definitely expect actions that escalate on employers and people we feel are opposing our ability to collectively come together in this moment. Definitely expect the birth and vibrancy of a 21st century labor movement.”

A 21st century labor movement must also know its history, and be able to learn from it. It’s notable that the Janus case is beginning just as AFSCME marks the 50th anniversary of the Memphis sanitation workers’ strike. In 1968, city workers pushed for better working conditions and recognition of their local AFSCME union after two sanitation workers were crushed by a truck while on the job. Now, their union continues to be the target of conservative groups seeking to destroy collective bargaining.

Understanding that background is crucial for Smiley. Being black and Southern means that these attacks on unions and working people don’t come as a surprise to her. The South has long been a testing ground for both anti-union policies and the hyperexploitation of black workers, she points out. The rest of the country might see the Janus case as a wake-up call to pay more attention to the battles in a region that often gets treated as a lost cause by national institutions.

The Fight for Workers’ Rights Continues

It’s important for those organizations to remember, Smiley says, “that they still represent the interests of a broader working class, a broader network of working people who may not be members of a union but who are still being exploited by the wealthy few.” And bringing that class of people together is essential. “Those who are stepping up to that challenge are seeing a lot of momentum and are gaining a lot of energy and are able to see past some of the limitations of the current attacks and to begin to imagine more of a 21st century labor movement.”

For Smiley, the next steps towards that movement are obvious. “What are we going to do now? We’re going to fight to build power. It’s not that complicated. We know how to do this.”

The Wealthy, the Poor, the Vulnerable