Photo via Fight for 15 campaign.

The Fight for Workers’ Rights Continues in Memphis

Fifty years ago, sanitation workers in Memphis went on strike to push for better wages and working conditions. Protesters across the country continue to make the same demands.

This month, my hometown of Memphis honored the 50-year anniversary of a strike by hundreds of black sanitation workers who walked off their jobs and marched with Dr. Martin Luther King, Jr. to demand higher pay and a union.

Their strike became a historic moment in the civil rights movement. But the story of underpaid and mistreated Memphis workers joining together to demand change isn’t just a part of my city’s past — it’s a part of the present.

This Monday, cooks and cashiers like me in Memphis went on strike and protested to demand $15 an hour and union rights. We marched from Clayborn Temple to Memphis City Hall — the same path marched by the original sanitation strikers — to carry on the fight for higher pay and union rights that they started.

The sanitation workers who went on strike five decades ago faced racism, abuse and deadly hazards on the job. When two workers were crushed to death by their truck’s faulty compactor, their co-workers launched a two-month-long strike because they knew the only way to bring about change was to organize and win a union. 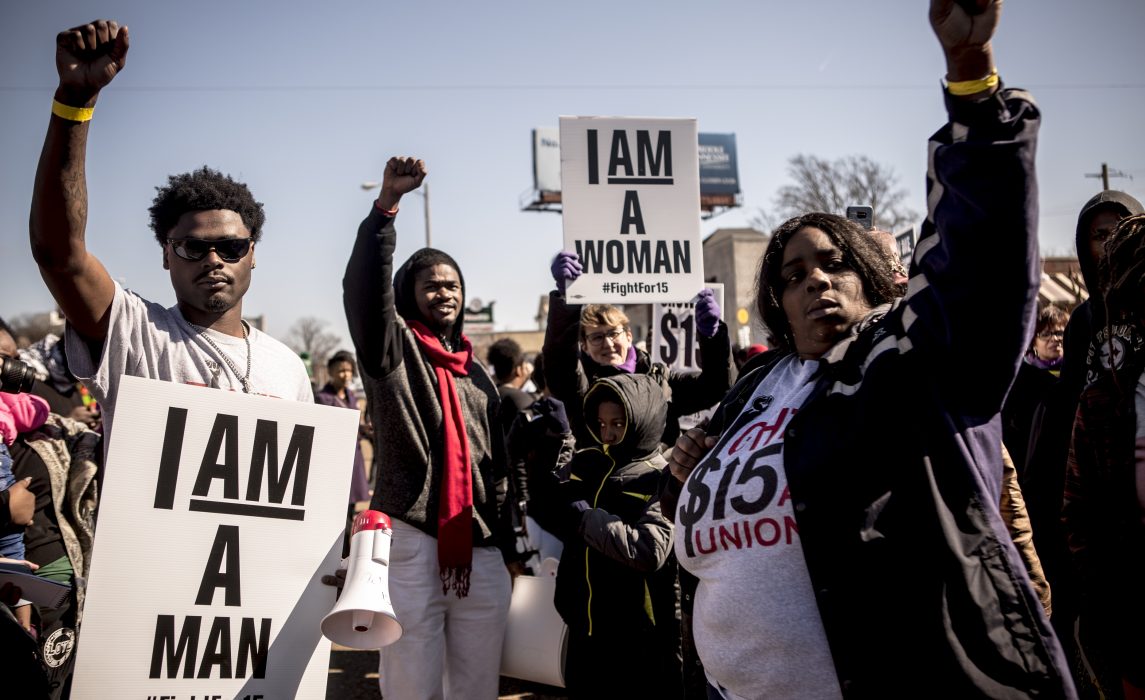 I joined the Fight for $15 last year because I also realized that the only way things will change in the fast-food industry is if workers like me join together and demand change.

I am a 37-year-old, full-time Wendy’s worker who is paid $7.55 an hour. My partner and I split two years ago, and even though being a mother is a full-time job, I need to work to make sure our kids have enough to get by.

In Memphis, it’s low-paying service jobs like fast-food that are available. I was the oldest of nine kids, and when I turned 16 I took a job at Arby’s in the mall to help my mother out. After Arby’s, I worked at McDonald’s for six years. So when it came time for me to go back to work, I took a job in the industry that was hiring.

MLK told the sanitation workers the night before he was shot dead: “We’ve got to give ourselves to this struggle until the end.” That’s exactly what we are marching today and planning on doing. #fightfor15 #PoorPeoplesCampaign pic.twitter.com/LB8KOJracU

But even though so many people like me depend on fast-food wages, these jobs don’t pay nearly enough for anyone to survive. I try to make my Wendy’s paycheck stretch so I can pay rent, electricity and the phone bill.

But the truth is I can’t do all that on $7.55 an hour—no one could. I turn to the state for food stamps and health care and cut out things like buying clothes for my kids. My oldest son is a talented athlete and plays football, basketball and baseball, but I have to ask the coaches to help me get the equipment and uniforms he needs to participate.

Our fight is not just about pay. It’s also about the right to a union, so we can have a say in our jobs and make sure we’re able to support our families. I don’t get sick days, health care, vacation days or anything else you’d expect with full-time work. When my kids are sick, I have to call my cousin to watch them. When my son has a basketball game, I’m usually ringing up sales behind the counter, not cheering on the sidelines.

My mother told me when I was growing up, “If you want change you better be prepared to fight for it.” That’s the lesson I try to pass onto my kids, and the lesson I hope they learn when they see me out chanting in the streets. Because in Memphis, and across the country, the fight started by the sanitation workers 50 years ago continues.

Shavonda Wilson is a Wendy’s worker, Fight for $15 leader, and single mother in Memphis. She is paid $7.55 an hour.

Tips Are for Servers, Not CEOs

by Irene Tung and Teófilo Reyes