A Farm Worker Speaks Truth to Power in Washington

Labor Secretary Marty Walsh got an earful from essential workers before inducting them into the agency’s Hall of Honor.

In the early days of the pandemic, California farm worker Carolina Sanchez saw stark differences in how she was treated on union versus non-union jobs.

She and other workers asked for a meeting to raise concerns with a supervisor.

“He told us:, ‘If you’ve already eaten the meat, you must suck on the bone.’ He let us know we weren’t worth anything.”

Sanchez shared her story at the Department of Labor headquarters in Washington, D.C. on September 1, as part of a ceremony to induct “Essential Workers of the Pandemic” into the Department’s Hall of Honor. Farm workers’ Covid-related challenges came on top of years of exploitation, including exposure to toxic pesticides that she says has debilitated some of her co-workers. Sanchez ended her remarks by expressing how much it saddens her to see such a rich country treat workers so badly. 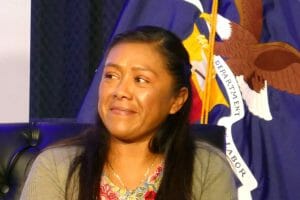 “Carolina, you’re right,” responded Labor Secretary Marty Walsh. “People don’t understand and respect the work farm workers do. In my fridge, there’s blueberries. But I don’t always think about how there were fingers on those berries – fingers that picked those blueberries and got them to my fridge. And even in non-pandemic times, those workers worked through very difficult conditions because a lot of times, the farmers in this country don’t respect the farm workers in this country. And we, as a country, need to start respecting farm workers.”

Sanchez was joined on stage by three other essential workers who shared personal testimony about the their experiences during the pandemic.

Jose Rodriguez, an Illinois truck driver, described the pride he felt when he witnessed just how much people appreciated his deliveries at the beginning of the pandemic. One of his first assignments during the pandemic was to deliver a truck full of personal protective equipment to St. Jude’s Children’s Hospital. When he delivered an appliance to one older woman, she told him he was the first person she’d seen since her husband died several weeks before.

Eddie Quezada, a produce manager at a Stop & Shop in Huntington, New York, shared what it was like to see his 15 employees dwindle down to just four while dealing with a sales frenzy that was “like Thanksgiving every day for four to five weeks” with limited access to protective gear. 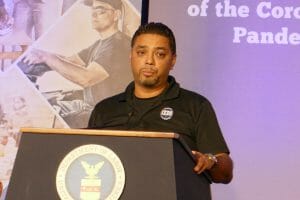 Andrea Beeman, a special needs paraeducator in Ohio and National Educators of America regional president, described how support staff stepped up to fill crucial roles while the buildings were closed.

“We were on the frontlines of the pandemic doing everything we could to minimize the impact of the pandemic on our students,” Beeman said. “Cafeteria workers made sure students and their families received nutritious meals, bus drivers delivered learning materials to students, and paraeducators and library media clerks joined teachers in their online classrooms to ensure students had what they needed in order to learn.”

Hall of Honor inductees are listed prominently in the lobby of the Labor Department building named after Frances Perkins, the first female member of a presidential cabinet and the first female Labor Secretary.

“The people on this wall did great things for labor – well most of them did anyway,” he added.

A few names on the inductee list do stand out as rather puzzling. One of the Trump administration’s picks was none other than union-busting Ronald Reagan. Yes, he was the president of the Screen Actors Guild, but his real stamp on the labor movement came when he fired more than 11,000 striking air traffic controllers in 1981 and replaced them with scabs. That move emboldened Corporate America to repress worker organizing, accelerating the decline in unionization.

But the Hall of Honor list includes many genuine labor heroes, including the man Carolina Sanchez says is her role model: César Chávez, the fruit and vegetable picker who became the leader of the United Farm Workers of America.

“I’m married with seven children,” Sanchez said. “I get up every day at 3 a.m. to take care of my children and I am in the fields by 6 a.m. I became a leader because when we don’t work under a union contract, we are mistreated. I do this because I want my own children to one day do a little bit of what César Chávez did. He was a leader.”

Sarah Anderson directs the Global Economy Project and co-edits Inequality.org at the Institute for Policy Studies. Rebekah Entralgo is the managing editor of Inequality.org.

What’s Hiking the Heat Up So High This Summer?

Our Super Rich Are Fretting About Their Great-Great-Grandkids