Advocates Call on Congress to #SealTheDeal for Care, Climate, and Justice

The next few months will be crucial to securing the big, bold policy wins needed to build a more equitable, sustainable country for all.

With members of Congress back home for the summer recess, hundreds of activists took to the streets in communities across the country for a #SealTheDeal day of action. Their demand? That Congress fights for every dollar in the $3.5 trillion recovery package and protects investments in climate solutions, care, jobs, and justice.

Disheartened by the smaller size of the bipartisan infrastructure bill, advocates participating in the #SealTheDeal day of action — which include members from organizations like the Sunrise Movement, Indivisible, and the Movement for Black Lives — are committed to holding members of Congress accountable to their promises of building a more sustainable and equitable future for all.

The preliminary outline of the recovery package, which Democrats plan on passing through the budget reconciliation process without Republican votes, makes historic investments in clean energy, tuition-free community college, childcare, and a pathway to citizenship for undocumented immigrants. The package would also create thousands of sustainable jobs by investing in the care economy and a Civilian Climate Corps.

In San Fransisco, California, outside the offices of Speaker Nancy Pelosi’s office, activists painted a #SealTheDeal mural and chanted, “Pelosi, be brave! Fight for us!”

“I’m here today to tell Senator King and our other representatives in Congress that we, the voters, want you to stay the course and seal the deal on the progressive gains in the federal reconciliation package,” said Rafael Macias at a #SealTheDeal even in Brunswick, Maine organized by Maine People’s Alliance. 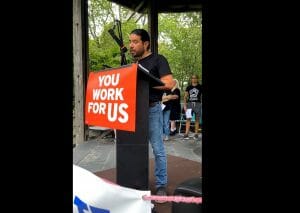 Rafael Macias speaks at a #SealTheDeal rally in Brunswick, Maine.

August is a key month for determining the future of what Senate Budget Chairman Bernie Sanders calls “the most consequential piece of legislation for working people, the elderly, the children, the sick and the poor since FDR and the New Deal of the 1930s.”

The House of Representatives reconvenes the week of Aug. 23 to follow the Senate in approving the $3.5 trillion budget resolution. The Senate, meanwhile, is crafting the legislative details to set up a vote on the final package this fall.

But moderate House Democrats have threatened to withhold voting on the budget resolution until after the smaller, bipartisan bill aimed at traditional infrastructure is passed, which could delay the much needed public investments even further.

“These two bills must move together,” said Madelyn Trimble, a constituent of Rep. Josh Gottheimer (D-NJ), at a #SealTheDeal protest in front of his district office. Rep. Gottheimer is one of nine moderate Democrats calling to delay the vote on the budget resolution in favor of first passing the bipartisan infrastructure bill.

Our ‘Trillion-Dollar Seven’: Can We Summon the Courage to Tax Them?

America’s Merchants of Death Then — and Now