The Civilian Climate Corps Could Be Transformative. Will Democrats Meet the Moment?

The climate jobs program in the budget reconciliation deal should build on FDR’s initiative in ways that advance equity for all.

When you think of the New Deal, what comes to mind? For many Americans, the era has an enduring physical legacy in our parks, tree lines, and trails.

From 1933 to 1942, President Franklin Delano Roosevelt’s Civilian Conservation Corps (CCC) enlisted over 3 million men between 18 and 25, planted 3 billion trees, fortified over 700 parks, and forged countless trails. FDR touted the program’s multiple benefits: by participating in the “Nation’s fight against the Depression,” Corps members were creating “future national wealth” and “moral and spiritual value.”

Back then, policymakers were primarily motivated by concerns about sky-high unemployment among young men and the possibility of urban unrest. But they were also moved to action by the Dustbowl, a human-created environmental disaster that destroyed livestock and crops across the southern United States.

Today, we are once again facing severe and inter-connected economic and environmental crises. While streets flood and skies burn orange across the country, young people are confronting a labor market with few good jobs.

In the face of these challenges, climate advocates are pushing to revitalize the Civilian Conservation Corps as a Civilian Climate Corps for the 21st Century.

Those on the front lines of fighting systemic racism, historic pollution, the climate crisis, and economic insecurity must be at the forefront of building a more just economy.

The current budget negotiations offer a huge opportunity to do just that.

Climate justice activists are pushing for a Corps that not only meets the staggering scale of our problems but that is also more deeply rooted in justice and equity than the original version.

The Green New Deal Network’s Transform, Heal, and Renew by Investing in a Vibrant Economy (THRIVE) Agenda would invest $1 trillion per year in new, low carbon, long-term living wage jobs for the next decade. They project the creation of 15 million “Green New Careers,” over half of which would originate in previously excluded and presently underserved communities.

As the Sunrise Movement notes, “those on the front lines of fighting systemic racism, historic pollution, the climate crisis, and economic insecurity must be at the forefront of building a more just economy.” With low barriers to entry and inclusive recruitment metrics, the jobs under this proposal would advance equity across race, class, and geography.

This would address serious flaws in the original CCC, which barred women’s enlistment and segregated Black and Indigenous workers in separate camps from their white counterparts. The New Deal program also sponsored what Sunrise terms “nonconsensual development on stolen Native American land,” institutionalizing western, technocratic notions of land use and management.

A reconciliation deal will need the support of all 50 Senate Democrats and views on this issue vary widely.

President Biden has supported a $10 billion investment in a new CCC over 10 years, which could create tens of thousands of jobs. Some moderates are focused on scaling up of the AmeriCorps program, which offers modest stipends to just 75,000 people per year for service projects.

On the bold end, Senator Ed Markey (D-MA) and Representative Alexandria Ocasio-Cortez (D-NY) have proposed to invest $130 billion over five years, a sum they say could support 1.5 million jobs.

At a recent press conference, Markey outlined a key equity innovation in their proposal: two years of CCC service would unlock $50,000 to put towards tuition at a public university or loan forgiveness. This would “make the Corps available and accessible to all Americans — not just suburban young people with parents who can help support them,” Markey said, alluding to a classic AmeriCorps participant profile.

Ocasio-Cortez spoke of a friend who had to choose Wall Street over AmeriCorps to pay off her student loans, underscoring the need for the CCC jobs to provide economic security.

The latest rumor is that Democrats are moving towards a $60 billion dollar compromise, but climate activists are continuing to push for a bolder plan.

To inspire broader public support, the Sunrise Movement and the Green New Deal Network have just launched the Green New Careers website. Visitors can answer a set of work-style and values-based questions to learn about options for which they might be most compatible: Careworker, Observer, Naturalist, Communicator, Organizer, Builder, Grower, or Analyst.

The site uses job creation estimates associated with the THRIVE Agenda so that quiz-takers can get a sense of how many jobs would be created in line with their strengths. For example, in a green economy, a Careworker might slot into one of 268,083 nursing assistant jobs, 111,772 childcare jobs, or 55,949 teaching assistant jobs. Among the 15 million new opportunities, there could be millions nurtured by CCC training. 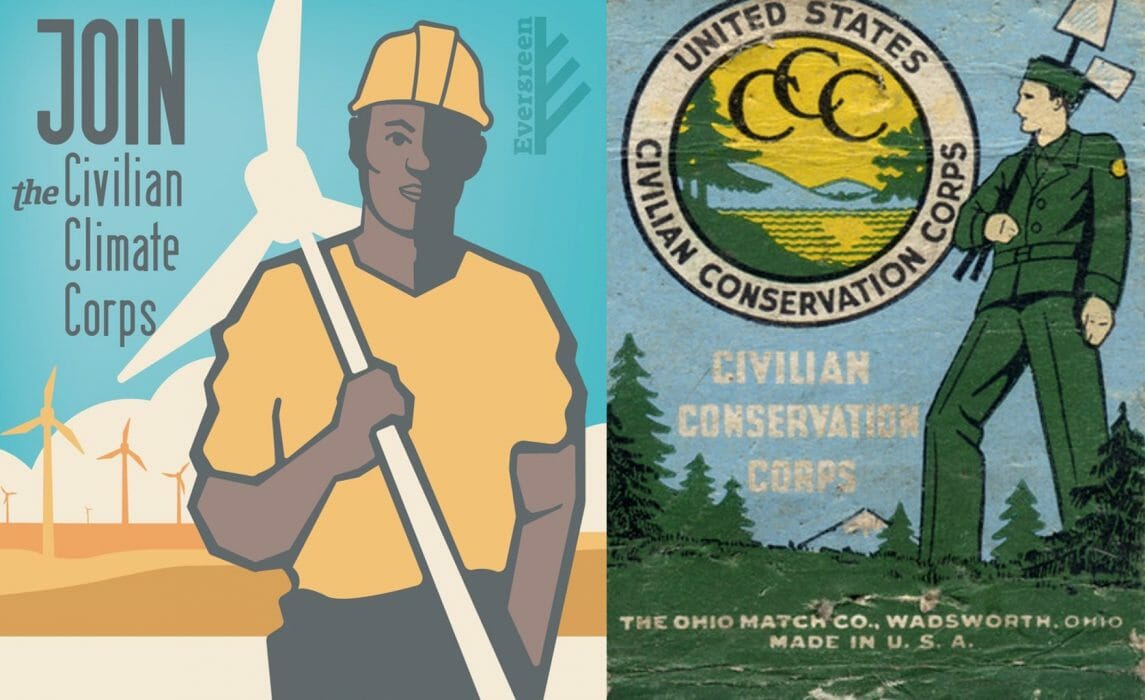 “What if,” asked Ocasio-Cortez at a recent rally, “in three months after the authorization, 250,000 young people were employed in a dignified job? What if this led to record performance in containing wildfires across our country and thousands of new trails?”

“The CCC under Roosevelt was the largest peacetime mobilization in American history,” she recalled. “And that is what this moment requires.”

In the meantime, some communities are already building this better future. Last September, Orcas Island created its own new CCC: with $15 hourly wages, meaningful partnerships with indigenous experts, and long-term career training to fight fires and plant trees.

Funded by the local Community Foundation, Orcas Island’s CCC has capacity to employ eight people. Imagine how different our future could be with programs like these on a national scale.

A Pastor Marches for A Moral, Equitable Economy for All

The Poor People's Campaign marched on Washington to demand that politicians legislate to protect the fundamental rights of 140 million poor and low-wealth people in America. Here's why a pastor from New York joined them.

Nurses are Standing Up to Profiteers and Demanding Universal Healthcare

The first-ever Senate hearing on Medicare for All examined how our profit-driven healthcare system endangers patients and betrays nurses.

The Gilded Glamour Met Gala Was a Fantasia of Inequality

Our second Gilded Age isn’t as enchanting as Condé Nast and celebrity spectacle make it seem – but a red carpet parade while event workers struggle for dignified treatment epitomizes the era.

A China-U.S. Face-Off Worth Cheering, Not Fearing