Photo: Nuns on the Bus.

The renowned 'Nuns on the Bus' are heading to Mar-A-Lago, the final stop in a cross-country campaign to undo the damage of the Republican tax reform.

Look out Mar-A-Lago. The renowned activists known as the “Nuns on the Bus” are headed your way. And they’re just as ticked off about the Trump-Republican tax reform as they were when they launched their cross-country “Tax Justice Truth Tour” in California over three weeks ago.

President Trump will most likely be out on the hustings when the nuns roll up to his Palm Beach playland just days before the mid-term election. But by picking his members-only Florida resort as their final stop, they’ll make a powerful point about the new tax law’s big winners. In their words, Mar-A-Lago is “the pinnacle of economic inequality and hoarding of wealth.”

If she could get the president’s ear, Sister Simone Campbell has an invitation for him.

“I want him to see the terrible harm he’s causing,” Campbell told the crowd at a Washington, D.C., tour event on October 26. “I want him to come with me to meet the people who will suffer the most as a result of his tax reform.”

As executive director of the Catholic group NETWORK, Campbell has led six Nuns on the Bus tours since 2012 to advocate for various social justice causes, from health care to immigration. 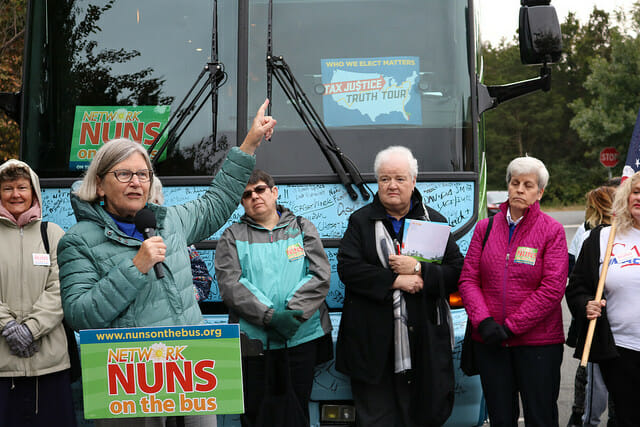 Sister Simone Campbell, speaking at a rally with other members of “Nuns on the Bus.”

The current tour will cover 44 cities in 21 states. Since their launch in California in early October, the nuns have met many people deeply affected by the Republican tax reform. At the D.C. event, the nuns turned several of the stories they’ve heard into a powerful popular education exercise.

Five nuns read descriptions of a person they’d met on the road, each representing a different income quintile, from a low-wage worker in the bottom 20 percent to a hospital CEO in the top 20 percent.

To illustrate our country’s sharp increase in inequality, the five nuns lined up and then took varying numbers of steps forward, based on how much their income group has progressed economically since 1980. Not surprisingly, the nuns playing the roles of those in the bottom tiers didn’t have to move much while the CEO walked deep into the audience.

The five nuns then took more steps to show how the Trump-Republican tax reform will deepen our existing inequalities. Again, those on the bottom hardly moved, while those at the top got lots of exercise walking in circles around the crowd.

Then two more nuns joined in, representing the top 1 percent and corporations. To illustrate the massive windfalls they’ve received from the Trump tax cut, the nuns began a marathon, marching arm-in-arm around the room.

Since the nuns launched their tour, Republican leaders in Congress have announced plans to cut vital social programs because — surprise, surprise — their tax cuts for the wealthy and big corporations have ballooned the deficit.

Some of the likely austerity measures, they pointed out, would harm Americans of every income group. A failure to invest sufficiently in public infrastructure, for example, would be bad for the entire economy.

But with the new tax law accelerating our decades-long trend of rising inequality, those at the top will still be increasingly disconnected from the rest of society.

In closing the D.C. event, the nuns invited the crowd outside to sign their bus so they can take everyone’s messages to Mar-A-Lago.

It’s no coincidence the tour is culminating just before the mid-term election.

“Who we elect matters,” said Campbell. “The Republican tax law is cutting the heart out of our nation. We’re on the road to hold members accountable for their votes.”

As the crowd filed out to find a space on the bus not already covered with messages, the nuns playing the roles of the 1 percent and the corporations were still marching around the room. To show the full extent of their benefits from the tax reform, they still had thousands of steps to go.

Teachers Promise a Show of Power at the Polls