The Seattle Democrat has been willing to take the heat to secure a down payment on an agenda for economic equity and sustainability.

Rep. Pramila Jayapal has never made any bones about the fact that her vision for economic transformation goes far beyond President Biden’s. As the chair of the Congressional Progressive Caucus, she’s been a leading champion of Medicare for All, a pathway to citizenship for undocumented immigrants, a wealth tax, living wages and union rights for all workers, student debt cancellation, and many other policies left out of the president’s Build Back Better plan.

At the same time, Jayapal recognizes the potential in the BBB negotiations to win what she calls a “down payment” on that much bolder agenda. And she’s been willing to take tremendous heat to secure the biggest down payment possible.

Twice — in September and again in October — Jayapal stood up to Speaker Nancy Pelosi and blocked votes on a narrow bipartisan infrastructure bill, insisting that the House approve the bill in tandem with the much bigger Build Back Better Act.

Then she upset some on the left by turning around and leading most Progressive Caucus members to vote for the bipartisan bill as a stand-alone in early November. She’d secured a verbal promise from conservative Democrats to support the BBB at a later date, but could they be trusted?

Last Friday, Jayapal’s gambit paid off when House Democrats virtually unanimously passed the Build Back Better legislation. And about those two months of delay tactics? She says they created the leverage to reinsert key provisions on paid leave, prescription drug pricing, and immigrant work visas. 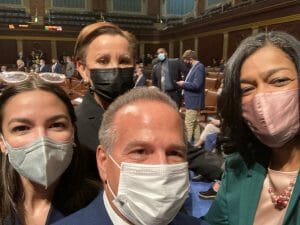 In a celebratory video, Jayapal highlights several of the other significant reforms in the bill, including universal preschool, a cap on child care expenses of no more than 7 percent of income for most families, extension of the expanded child tax credit, and significant investments in home-based care, affordable housing, and clean energy jobs.

“And did I mention,” Jayapal asks, “that this is all paid for by making large corporations and the wealthiest Americans begin to pay their fair share?”

Indeed, as my fellow tax expert colleague Chuck Collins and I wrote recently, while the House bill doesn’t go as far as it should to address skyrocketing wealthy inequality, it will collect more than $1 trillion from the rich and big corporations to invest in children, seniors, and workers.

Of course it’s far too early to declare victory and go home. The Senate must pass their own version of the bill — without a single Democratic vote to spare. If they make changes, the House will need to vote once again on a final version before it heads to Biden’s desk. But the Progressive Caucus has clearly demonstrated their expanded power on Capitol Hill.

In her memoir, Use the Power You Have, Jayapal wrote that when she arrived in Congress in 2017 she was “surprised to see how little power was really leveraged among progressives.”

Then-Congressman Bernie Sanders and others formed the Caucus in the 1990s as what she describes as a “relatively informal social group where progressive congressmembers could come together and discuss ideas.”

The CPCC brings together a wide array of groups across issue areas to develop progressive policy agendas and share analysis of legislative developments. The Institute for Policy Studies and the Economic Policy Institute co-lead a CPCC policy and research council, and the Center’s action arm publishes a weekly “DC Download” newsletter that has been a go-to guide to the insanely complex reconciliation negotiations.

In 2020, Pocan and Jayapal also led an internal review to identify ways to further enhance the power of the Progressive Caucus. That led to decisions to move to a single chair leadership model and new rules to allow all of the nearly 100 Caucus members to jointly endorse signature bills.

The Progressive Caucus cannot win everything we need through the chess game that is the current budget process. To achieve an equitable and sustainable economy, much more needs to be done, particularly to address climate change and wealth inequality. For insights into that bigger, bolder agenda, see the Third Reconstruction Resolution Jayapal, Rep. Barbara Lee, and other progressive leaders endorsed earlier this year.

But having Jayapal in the center of this high-stakes game means we have a much better chance at securing real progress for people and the planet.

The U.S. Postal Service is a vital source of decent jobs for Black workers. Instead of cutting or privatizing services, this public agency should expand to meet 21st century needs.