A new Congressional resolution lays out a comprehensive vision for eradicating poverty and tackling racial and economic inequality.

Amidst partisan haggling over President Biden’s infrastructure proposal, the Poor People’s Campaign joined progressive House members on Capitol Hill on Thursday to lay out a comprehensive moral vision for the nation.

“It’s unforgiveable that 250,000 people die every year in this country from poverty and inequality,” said Rep. Barbara Lee (D-Calif.) during a press conference to unveil a sweeping Congressional resolution for a “Third Reconstruction.”

The resolution’s title draws on the transformational history of the First Reconstruction following the Civil War and the Second Reconstruction of the 20th century civil rights movement — two periods during which multi-racial coalitions achieved significant strides towards racial and economic justice.

“We allow poverty to continue when the richest 130,000 Americans have as much wealth as the bottom 117 million, when 55 of the largest corporations paid not one dollar in taxes last year, when we let our health system to be focused on profits — not patients,” Jayapal said. 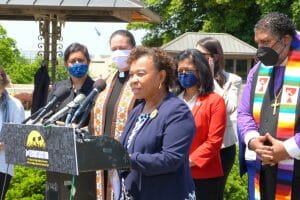 “What is the cost of inequality?” asked Barber, pointing out that billionaire wealth has increased by more than $1.3 trillion during the pandemic while millions have fallen into poverty. “This is a moral issue, rooted in the moral commitments of our Constitution. The first thing we had to do is establish justice, promote the general welfare, and to ensure equal protection under the law.”

The Congressional resolution lays out a roadmap for achieving those lofty goals.

A long list of proposed economic policies focus on eradicating poverty and sharply reducing racial and economic inequality. They include a federal jobs program to build up climate resilient public infrastructure, universal health care and paid leave, raising the minimum wage to a living wage, and guaranteeing the right to form and join unions.

While not directly addressing President Biden’s proposals, the Third Reconstruction resolution goes beyond the administration’s commitments to date in several key areas.

For example, to secure resources for public investment, the resolution calls for redirecting 10 percent of the military budget and generating revenue by fully repealing the 2017 corporate tax rate cut and introducing new taxes on wealth and Wall Street trading.

Several members who spoke at the press conference described the ravages of poverty and inequality in their Congressional districts.

“In San Diego County, we have Fortune 500 companies and mansions on the beach,” said first-term Rep. Sara Jacobs. “But we also have 40 percent of children living in poverty — and that was before the pandemic.” 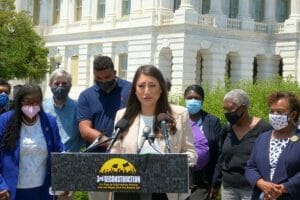 A self-described “Millennial,” Jacobs said her generation is ready to move beyond modest reforms to reimagine and rebuild American society for the future. She called on others like her who are “privileged to have benefited from the system as it is” to support movements like the Poor People’s Campaign that center those hardest hit by unfair and discriminatory policies.

Over the last three years, the Campaign has developed a network across 45 states that includes over 2,000 faith leaders and 300 partner organizations. In addition to pushing the Third Reconstruction resolution, the group is organizing a National Poor People’s and Low-Wage Workers Assembly on June 21 that will be accessible online and in person in Raleigh, North Carolina. This will kick off a year-long nationwide campaign leading up to an in-person Mass Poor Peoples and Low-Wage Workers Assembly and Moral March on Washington in June 2022.

For those who will inevitably raise questions about how the Congressional resolution, if fully enacted, would impact the deficit, Barber was ready with answers.