With One Huge Victory Down, UK Uber Driver Moves on to the Next Gig Worker Battlefront

James Farrar, a lead plaintiff in the successful UK labor rights case against Uber, is turning his sights to data protection, a critical worker issue in the 21st Century.

In recent weeks, courts in multiple countries have delivered huge victories for gig workers by establishing the principle that these workers are, in fact, employed by digital platforms and are thus entitled to basic worker rights and protections.

The most stunning win was the UK Supreme Court’s recent scathing judgement against Uber. While lower courts had ruled again and again that UK-based drivers are in fact workers, the company had refused to comply with this classification until this final ruling.

James Farrar, a former Uber driver and a lead plaintiff in the case, is celebrating this huge victory, which means that gig workers will have the right to wage protections, holiday pay, and other basic benefits. But during six years of litigation against Uber, Farrar and his colleagues realized that gig workers would need to fight on additional fronts. Right now, these employees lack access to the data that their app-based employers gather about them. 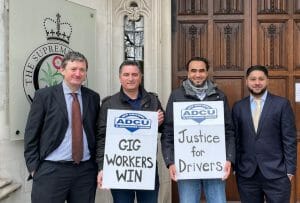 To take on this critical battlefront for worker rights in the 21st Century, Farrar has founded Worker Info Exchange. I asked Farrar to explain why he started this new nonprofit organization and what it hopes to achieve.

How did you come to realize the need for a data rights strategy?

When we brought the employment case, Uber challenged me with my own data and they came to the tribunal with sheaves of paper that detailed every hour I worked, every job I did, how much I earned, whether I accepted or rejected jobs. And they tried to use all this against me. And I said we cannot survive and cannot sustain worker rights in a gig economy without some way to control our own data.

So I used Europe’s General Data Protection Regulation (GDPR) to try to extract my data from Uber. And it began by asking questions, what data do you have and what can you give me? And I began to understand that Uber was unwilling or unable or both to give it to me. And I needed an entity behind me to get that to happen.

Gig workers need access to data to see how they are being managed and paid. Right now companies are using automated decision making. This means allocation of work, performance management, and dismissals are decided based on data that the app gathers and feeds into algorithms. We need to understand the code behind those because sometimes those decisions are unfair. When decisions are unfair we can’t just let company executives say it wasn’t intentional. We need to expose and challenge the logic fed into the algorithm. Very few people are doing this right now.

GDPR is useful because it doesn’t just give you the right to data, it’s access to logic of processing. I have a right to fairness of processing under GDPR. So data rights are more comprehensive than just simple access to raw information. What we have done so far is challenge Uber to disclosure — what data the app collects, things like GPS trace. But what we really want are inference data. What decisions has it made about me? How has it profiled me? How does that affect my earnings? This is what Uber has not given us.

What else can advocates achieve if this data is made transparent?

There was a fight in London about congestion charges (i.e. charging drivers who choose to be on the road during heavy traffic periods) and we could see that Uber actually was in favor of pushing congestion charges onto drivers. That seemed counterintuitive but when we used freedom of information to get Transport for London’s regulatory analysis, it was extremely interesting. We found out that Uber was predicted to pick up market share if congestion pricing went through, for two reasons. First, it could optimize better than taxi competitors. Second, Uber had more power over labor than other operators to shove that cost onto them. So that showed me we would have to have our own collective data to be able to participate in public policy debates.

On March 11, Uber drivers scored a major victory in the Netherlands when Amsterdam’s District Court ruled that Uber and Ola, another ridesharing company, must disclose data used to deduct earnings, assign work, and suspend drivers. But Uber will no doubt fight this decision. They kept appealing your UK case for six years, even though they kept losing! Worker Info Exchange is just a small startup organization. What do you need now to keep going?

We need support to continue to educate gig workers about how important it is to have access and control over data. We need to be able to continue to gather the evidence we need to support the legal case on data rights. We need political support from regulators and that means they need to understand digital rights in context of employment rights and not get mystified. Just because there is computer code involved doesn’t mean there is no relationship! We need to be able to educate and influence regulators about a fair deal for data access.

We won a couple of important points. We forced transparency on Ola’s surveillance system that is used for driver profiling. They were profiling people and assigning a fraud probability score, and used that for decision-making. We did not know about that. Now they have to tell us not just the score but basis of calculation. But the game of hide the ball will continue.

As Farrar and his colleagues continue to use innovative litigation strategies, other advocates are pushing to reform laws. In Spain, unions have worked with labor officials to obtain the right to access to the algorithms companies use to manage their workforce. Labour Minister Yolanda Diaz has explained this will help labor officials monitor conditions and stop workers being underpaid. This is part of Spain’s forthcoming legislation to bolster protections for non-standard workers of all kinds.

Despite recent setbacks in the United States, there are opportunities to take a similar approach to workers’ data rights. In 2018, California courts issued an important ruling addressing the misclassification of app-based gig workers. Unfortunately, companies refused to comply with the ruling and launched a legislative battle, resulting in the state’s notorious Proposition 22 — the most expensive ballot measure in history — exempting them from labor laws. But Prop 22 was a defensive maneuver by platform companies. Gig workers in the US can learn much from their European comrades’ effective maneuvers to take the offense in challenging companies and demanding rights protections.

Bama Athreya is host of The Gig Podcast and affiliated with the Just Jobs Network. She is also on the board of Worker Info Exchange. For the full story of the UK drivers’ lawsuit against Uber, listen to Episode 3 of The Gig Podcast, Judgement Day.