What Happened When the UK Privatized Covid Food Aid? Children Got Scraps.

Manchester United star Marcus Rashford has shamed Prime Minister Johnson into addressing the scandal, but children shouldn't have to rely on a famous athlete to ensure they don’t go to bed hungry.

As Covid-19 infection rates and deaths hit unprecedented highs in the UK, schools are closed to the majority of pupils. For children in low-income families who would normally receive means-tested free school meals, support is being provided to their parents or caregivers via cash payments, supermarket vouchers, or food parcels. In England, the Department for Education has “strongly encouraged” schools to adopt a “food parcel first approach,” with provision outsourced to private providers in most cases.

This week, social media has been flooded with photos of food parcels provided by private catering firms, with distressed recipients and right-to-food campaigners branding them inadequate and insulting.

What was particularly shocking was not just the frequently tiny amount of food provided to families in financial crisis, but the way “scraps” of food were unhygienically packaged in makeshift containers, including, in some cases, plastic coin bags used by banks. These parcels sharply contrasted with examples of more generous food parcels provided by in-house school catering staff for the same amount of money, if not less.

Whoever thinks it is ok to send out bits of vegetables and fruit like this AND scraps of other food in what seems to be money bags is very wrong. Imagine thinking that the saving to be made on half a carrot was worth it or that it might be hygienic enough to send out fish in bags pic.twitter.com/Lc7toC7rGH

The supposed logic behind providing food parcels instead of cash transfers is the pernicious myth — recently restated by Conservative minister Vicky Ford and Member of Parliament Ben Bradley — that emergency financial support provided to low-income families in lieu of free school meals will be “misspent,” despite a mountain of evidence to the contrary.

The UK government appears to be less concerned, however, with the hundreds of millions of pounds that it is spending on contracts to private companies such as Chartwells that have drawn criticism for sub-par service. This week, one mother estimated that the food box she received in lieu of a £30 voucher was worth £5.22. So where, she asked, did the other £24.78 go?

This is not the first time that there has been an uproar over the atrocious quality of food provided through UK government contracts awarded to private companies. Last year’s food box scheme for people “shielding” at home because of underlying health conditions was found to be decidedly sub-par. Bidfood and Brakes, the two contractors that were awarded the £208 million contract without a tender process, delivered boxes that did not meet minimum nutritional standards, and did so at a 69 percent mark-up on what could have been procured through similar food boxes provided by supermarkets.

Food insecurity is not a new issue for the UK. Although it is one of the wealthiest countries in the world, millions of its people go hungry every year, and the Covid-19 pandemic is making it significantly worse. Every single metric from both official statistics and civil society show that food insecurity is skyrocketing. The Independent Food Aid Network found that food banks across the UK provided 110 percent more food aid parcels in 2020 than in 2019.

It was an issue long before the coronavirus pandemic. The UK has seen a steady increase in food insecurity over the past decade, due to a combination of an increasingly harsh and punitive welfare system, the cost of living outstripping wages, and immigration policies that have created a “hostile environment” for migrants.

Surely there has to be a point where enough is enough, and where things have gone too far. If it is not the point where children are being given tiny amounts of tuna in a plastic bag alongside half a bell pepper and a small chunk of carrot, with parents being told it is meant to last a week or two in a time of national crisis, then it is hard to see what is.

What is clear is that public outrage is, belatedly, having some impact. 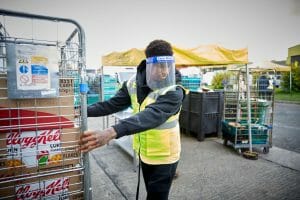 As of next week, schools in England will be able to use a national voucher scheme instead of food hampers. It is clear, however, that more than reviews and tinkering around the edges are needed, not least because there were well-documented and still unresolved issues with the voucher scheme last time it was used.

So, going forward, what really needs to happen?

First, what is urgently required is a cash-first policy in place of vouchers or food hampers to provide families with the means to feed their children: not only because this is the most dignified approach and one preferred by the majority of families, but also because it is the most efficient option, especially in light of multiple problems with the private contractors providing food parcels.

Next, a full overhaul of the country’s work, welfare, and immigration system is essential. The UK government, working in concert with the devolved administrations of Scotland, Wales and Northern Ireland, also needs to make the right to food a reality for all people in the UK by incorporating this right into domestic legislation. Ian Byrne, a Member of Parliament from Liverpool and an anti-poverty campaigner, has put a motion before the Westminster Parliament that calls for exactly that, and a public Right to Food petition has now gathered nearly twice as many signatures needed to force the government to respond.

Children in the UK should not have to rely on a star athlete and viral tweets to ensure that they don’t go to bed hungry. They should be able to rely on their basic human right to food — a right that successive UK governments have pledged to uphold on an international stage, but as yet have made no serious domestic commitments to. We must never forget that there is no lack of food in the UK; there is also no lack of money. What there is, unfortunately, is a lack of political will and accountability.

Imogen Richmond-Bishop is the coordinator of the Right to Food programme at Sustain: the Alliance for Better Food and Farming. She is an Atlantic Fellow for Social and Economic Equity at the London School of Economics. She tweets at imogen_rb

Wall Street Money, Racism, and the Politics of Anti-Democracy