Activists protest inequality outside the World Bank during the 2017 annual Meetings of the World Bank and IMF on October 12, 2017 in Washington, DC. BRENDAN SMIALOWSKI/AFP/Getty Images)

The U.S. administration is criticizing the international financial institutions for promoting progressive taxation while at the same time using them to promote the Trump brand through the 'Ivanka Fund.'

Inequality was a major theme of discussions, both official and on the side-lines, during the recent three-day-long annual meetings of the International Monetary Fund and World Bank in Washington, D.C.

The issue was given considerable profile in major IMF publications launched just before the international financial institutions’ October 13-15 meetings. One of these, World Economic Outlook, underlined the contribution of lagging wages, caused in part by restrictions on collective bargaining, to growing inequality and the “incomplete recovery.” The other, Fiscal Monitor, emphasized the need to restore income tax progressivity, such as raising top income tax brackets, if countries are to make headway in reversing increased inequality.

These reports, and some other mild statements by the heads of the IMF and World Bank deploring the negative economic impacts of growing inequality, raised the ire of the host country government. The Financial Times quoted President Trump’s budget director, one of the architects of a plan to slash taxes on corporations and high-income earners, as accusing the IMF of being “heavily invested in [the Trump tax reform plan] not working out.”

President Trump also lashed out against the World Bank later in the week for continuing to lend to China, even though Bank president Jim Yong Kim engaged during the annual meeting with the president’s daughter in yet another activity to promote the Trump brand, namely the Women Entrepreneurs Finance Initiative, known by Bank staff as the “Ivanka Fund.” The other participants in that event were five CEOs and a minister of the United Arab Emirates. The United States contributed $50 million to the World Bank’s Ivanka Fund in July, a few months after announcing its intention to cut hundreds of millions of dollars to the branch of the Bank that donates to low-income countries. 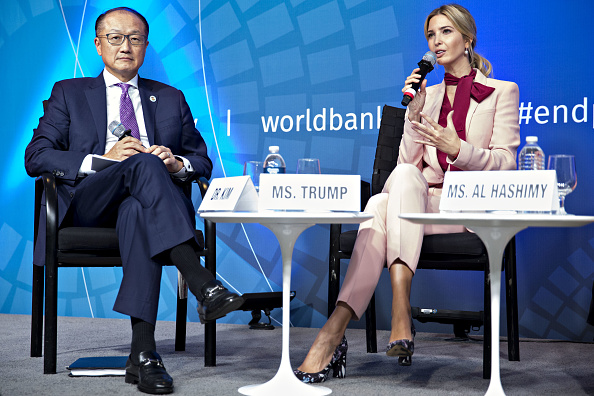 It may be noted that neither the issue of inequality nor that of climate change were mentioned by G20 ministers in their press conference during the annual meetings, perhaps reflecting U.S. influence. On the other hand, the developing-country group of countries within the IMF and World Bank, known as the G24, were the only official (i.e. non-civil society) party to call on these institutions to assess the social and distributional impact of fiscal adjustment programs.

The G24 also called for additional support to developing countries to deal with the impact of climate change, and asked the World Bank and other multilateral development banks “to activate financing approaches to make renewable energy affordable.”

The final communiqués of the (IMF-directed) International Monetary and Financial Committee and the (World-Bank-directed) Development Committee made brief but muted mentions of support for each institution’s work on inequality. However, the Development Committee communiqué also contained a heavy dose of “private sector solutions” to various global problems, reflecting the strong emphasis on public-private partnerships that the Bank has adopted since Kim took over the Bank’s leadership in 2012.

On a positive note, the World Bank announced that their new labor safeguard will finally enter into effect in the fourth quarter of 2018, as part of its new Environmental and Social Framework. The International Trade Union Confederation had submitted detailed recommendations for this labor safeguard and in advance of the annual meetings, they had urged the Bank to “proceed with the implementation in such a manner that all activities financed by the Bank comply with recognized international workers’ rights.” The policy was adopted more than a year ago but the Bank has been slow in putting it into effect.