For Ayn Rand Acolyte, Taxes Are a Form of Violence

As economic divides fan the flames of Brexit and Trumpism, a free market fundamentalist clings to the view that inequality is merely part of the natural order.

When I learned that Dr. Yaron Brook, chair of the Ayn Rand Institute, would be giving a talk about how equality holds us back at the London-based Adam Smith Institute, my curiosity was piqued.

As someone whose day job aims to reverse extreme inequality in the UK, I was intrigued by the opportunity to hear from someone at the very remote opposite end of the political spectrum.

Just two minutes into his talk, Brook took a dig at the French economist widely credited with focusing global attention on the problem of wealth and income concentration.

“Thomas Piketty puts a lot of energy into trying to convince us he is not a communist,” Brook says. “He might have cheated in how he put the dataset together… but let’s assume he’s right.”

My housemate (who I’ve dragged along for fear of going solo) and I share an uneasy look. We’re off to an interesting start. Brook proceeds to deliver an hour-long tour-de-force of I’m still not quite sure what. Topics covered include: how we still don’t understand gravity, the futility of gender studies, his love for Jeff Bezos, China stealing U.S. innovation, a statute of limitations on slavery, and repeatedly — and this cannot be stressed enough — the “violence of tax.”

But to avoid fighting diatribe with diatribe, it’s worth trying to disentangle a few of Brook’s arguments. 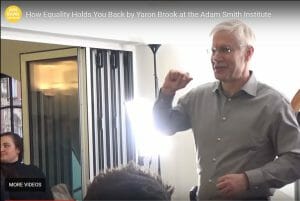 Lesson One: Tax is the worst thing in the world.

Throughout the talk, Brook refers frequently to “they.” They want x and they want to take away y. But we are never really sure who they are. He also refers to witch doctors, but leaves their exact identity a mystery too.

When it comes to “the left,” he claims they’re all obsessed with money.

“Marx was a materialist,” Brook muses at one point. “But us capitalists, we’re not that bothered. We like money but it’s not the be all and end all.”

This is a novel take but before we can get any further, we’ve quickly moved on to the top rate of income tax. Brook zeroes in on 55% because it’s “near” to what we have in the UK (for those interested, it’s actually 45% in England, Wales, and Northern Ireland and 46% in Scotland).

“What does this 55% represent?” Brook asks the eager audience.

This is our introduction to today’s key lesson – the violence of government. Government is a violent institution because it takes 55% of our hard earned income to pursue an ill-conceived redistributive agenda. This is why Brook has moved 3,000 miles away from the Ayn Rand Institute’s California office to Puerto Rico — for the island’s 4% tax rate! It’s been approximately 90 seconds since capitalists weren’t that bothered about money and now here we are losing 55% of our lives to taxes.

This is, of course, related to government as violence. We can trust the government to run the military because the military is violent and “government is an act of force.” Guns and violence, however, do not make for an effective education system so they must be privatized.

Education is consistently pinpointed as the key reason “poor people” are being held back. Brook cites an example of a religious school in Detroit that has much better outcomes than a local government-run institution. We have no slides and there is no reference to a paper so we just have to take his word for it. Privatize it all.

We also have a deep gratitude for pioneering entrepreneurs such as Jeff Bezos and Steve Jobs. Brook’s life is “so much better now with Amazon” and, while holding his iPhone aloft, declares how these technologies have changed his life more than most people he knows. “How cool is that… I live on the same planet as Jeff Bezos” are words that actually leave his mouth.

In the Q and A, I asked Brook about Mariana Mazzucato’s research showing how many of the innovations contained in a smart-phone — the internet, GPS, touch-screen — all came from government-funded research. Huawei is also a state-owned enterprise in China, I point out.

Brook responds by claiming that China is merely copying the United States and the U.S. government crowded out private capital and monopolized the field of innovation. I’m told to read up on how Chinese farmers came together and declared private property rights and how that led to the boom in China. I genuinely can’t follow what he is saying so I give up.

Brook continuously rails against Utopian notions of equality. He is vociferously against perfect equality, the idea that everybody should be exactly the same. I’m not sure who he thinks is preaching perfect equality but whoever they are, Brook says “they” don’t know how much equality they want, “they” just know that we are too unequal.

The kick in the teeth is Brook’s assertion that inequality is natural!

“We are all meta-physically different,” he claims. Some of us have “study-hard genes,” and we all have agency and are responsible for our own lives. The racial wealth gap is somehow dismissed by declaring that slavery was ages ago and Brook himself has not benefited from his parents whatsoever.

As we get towards the end of this ordeal, an audience member reminds Brook that there is next to no scientific evidence for the existence of free will. Of course, Brook retorts, this is because science is a relatively new field. We still don’t fully understand gravity either but that doesn’t mean it doesn’t exist.

At this point, I’ve lost the will to continue. Dazing in and out of intellectual consciousness, I’m bombarded with more gems: “there’s no economic theory that says inequality is a problem.” (Let’s ignore the fact that Adam Smith himself saw inequality as bad economics). On Brexit, we’re ultimately reminded that pursuing a zero tariff policy is right and “morally just.”

Eventually we run out of time. Finally free, my housemate and I walk past the Houses of Parliament where Brexit protesters – both Leavers and Remainers – are now a constant reminder of the seemingly unbreachable divisions running throughout UK society.

“Has anyone ever seen society?” Brook had asked earlier, with a rhetorical flourish.

Here it is, Dr. Brook – right outside your window, tearing itself apart. Maybe you could try to understand it.

Liam Kennedy is a Research Officer with the Centre for Labour and Social Studies (CLASS) in London. @liamkennedy92

So Who Really Got a Tax Cut This Year?

When Cities Shut the Water Off