After making the case that universal preschool is even more important under the pandemic, advocates easily won the vote by a 64-36 margin.

“I’ve worked in childcare since I was 15 — since I was a child myself,” said Pace, who lives in Oregon’s Multnomah County, the metro area around Portland.

Preschool workers like Pace were struggling to make ends meet even before the coronavirus.

“All of us were making poverty wages,” she noted. “Walking to work. Carpooling to work. Taking the bus. Eating the extra food at the table with the kids because we were hungry.”

Pace, along with Sahar Yarjani Muranovic and Emily von W. Gilbert — two other Multnomah County activists on behalf of universal preschool — are part of a coalition fighting to transform early childhood education in their community. They have lofty goals, from addressing racial disparities in access to preschool and paying educators a living wage, to helping women stay in the workforce amidst the pandemic.

Now those goals, thanks in part to their organizing, will have a shot at realization. On election day, voters in Multnomah County voted overwhelmingly to adopt Measure 26-214, or the Preschool for All plan, which will guarantee preschool to all three- and four-year-olds, among other outcomes. The measure passed by a 64-36 margin.

Preschool for All enjoyed wide support, including from the Universal Preschool NOW (UP NOW) coalition, of which Pace, Muranovic, and von W. Gilbert all played a part in building. Incredibly, UP NOW was able to garner over 32,000 signatures in just four and half weeks to secure its place on the ballot as a citizen’s initiative before ultimately deciding to combine efforts with Preschool for All.

The Preschool for All initiative reflects a mountain of evidence on how life-changing access to quality preschool for three- and four-year-olds can be. Participation in preschool correlates with long-term benefits that include everything from higher lifetime earnings and better health outcomes to lower rates of crime and teen pregnancy. In the short term, quality preschool leaves children more prepared both academically and socially for grades K-12.

Despite all this evidence, only 24 of the nation’s 40 largest cities offer preschool programs that reach over 30 percent of their four-year-old population, concluded a report last year from CityHealth and the National Institute for Early Education Research. Preschool participation varies widely by jurisdiction. High attendance costs, workforce shortages, and a lack of public investment in early childhood education all reduce participation.

Multnomah County’s Preschool for All initiative aims to address each of these interrelated concerns.

Local preschool teachers and workers, said initiative organizer Muranovic, can’t afford to “send their children to those places where they are taking care of other people’s children.” They told her “about working at places where they charge parents or families $1,200 to $1,300 a month.” 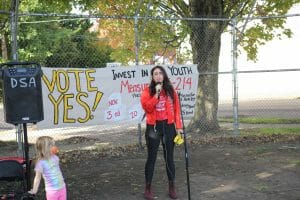 Preschool for All recognizes that child care systems that have workers hanging on by a thread, worrying about being able to afford a roof over their head or food on their table, lead to high turnover.

“We’re losing really amazing, passionate, skillful people because we do not respect their value enough to pay them living wages,” said Muranovic.

Besides ensuring that all three- and four-year-olds have access to quality preschool, the Preschool for All initiative also includes a strong labor component.

The mean annual salary for preschool teachers in Oregon runs about $32,000, with hourly wages ranging from $14 to $16 dollars. Preschool for All will bump that annual figure up in Multnomah County to north of $74,000 for lead preschool teachers and just shy of $56,000 for their assistants.

This pandemic year has revealed just how much society depends on what we’re now calling “essential workers,” and how little society compensates them. Passage of the Preschool for All initiative would help pivot the economy toward valuing care work, education, and children.

But at whose expense? Society’s most affluent.

The idea to fund Preschool for All through a tax hike on high-income earners came naturally to initiative organizers who, said UP NOW organizer von W. Gilbert, were seeing “people living in tents and cranes building condos at the same time.” 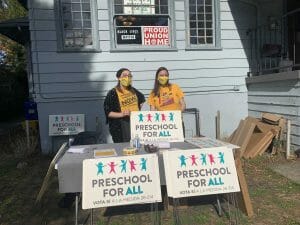 “Portland is obviously doing well,” she added. “Why aren’t we?”

If universality isn’t reached by 2026, meaning the county lacks enough funds to provide preschool to all who want it, the initiative has language that would bump the 1.5 percent tax rate to 2.3 percent.

The small marginal tax on Multnomah County’s highest income earners that Preschool for All proposes will impact, according to county budget office data, only the top 8 percent of taxpayers.

Pace, Muranovic, and von W. Gilbert, all members of Portland’s chapter of Democratic Socialists of America, are hoping the Preschool for All model can serve as a blueprint for other communities. With the Preschool for All initiative, they say, mothers, parents, and coalition partners are realizing their potential to come together and make an impact.

“Preschool for All has given me an opportunity as a parent to have a voice where I’ve never had a voice before,” noted Lydia Gray-Holifield, a parent leader from the Early Learning Multnomah Parent Accountability Council. 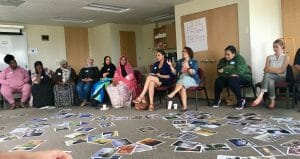 This Council helped spearhead the campaign from the beginning. And, according to Kara Hansen, an UP NOW organizer volunteering for the Preschool for All campaign, the Council worked to make sure the Preschool for All initiative included a landmark ban on suspensions and expulsions of three- and four-year-olds, a practice that disproportionately impacts Black boys. Few existing universal preschool programs include this important protection.

Preschool for All also prioritizes children of color, children with disabilities, and other historically marginalized groups.

“As a parent of Brown and Black children in Multnomah County,” summed up Gray-Holifield, “finding affordable preschool — finding free preschool — is a miracle.”

Parents shouldn’t need a miracle to have high-quality, free preschool for their kids, particularly since evidence of preschool’s effectiveness is so strong. On the other hand, a “miracle” is a beautiful metaphor for what the power of organizing and a united community can achieve.

Communities that come together and build coalitions based on the common good, as the movement for universal preschool in Multnomah County has done, can create transformational policies that lift up even the most marginalized.

And what happens now that Preschool for All has passed?

“We keep going,” said Muranovic, noting that there are many inequities left to address.

The massive coalition behind the push for universal preschool in Multnomah County may just be getting started.

Note: An earlier version of this article appeared on October 30, 2020.

Robert P. Alvarez works in communications at the Institute for Policy Studies. He writes about criminal justice reform and voting.