Joined by Rep. Jamie Raskin, consumer advocates gathered outside the headquarters of the Consumer Financial Protection Bureau on November 27 to defend the mission of an agency that’s delivered $12 billion in relief to over 29 million Americans in its short life.

“Standing up to Wall Street Banksters and Fraudsters since 2011,” read one of the signs that greeted CFPB employees heading into their offices for their first day under a new, but not yet decisively identified, leader.

The “Vigil to #DefendCFPB” came hours after Acting Director Leandra English filed a lawsuit to prevent President Trump from installing Mick Mulvaney, the director of the Office of Management and Budget, to run the consumer bureau. Mulvaney also arrived at the CFPB today, with a load of donuts for the staff.

But it will take more than donuts to legitimize Mulvaney’s role. It will take a court ruling, or Senate confirmation of a permanent replacement for Richard Cordray, who stepped down as Director of the CFPB last week.

“Acting Director English is rightly in that post until the Senate confirms a new director, and filing suit will allow the courts to resolve the matter,” said Lisa Donner, executive director of Americans for Financial Reform. “In the meantime, the CFPB still has work to do holding Wall Street to account on behalf of American consumers, and Ms. English and the CFPB staff can continue its successful run.” 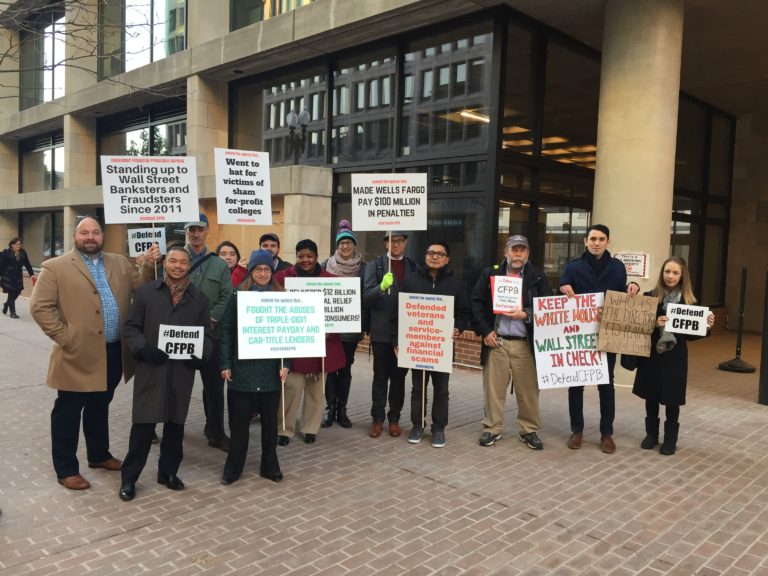 Rep. Jamie Raskin of Maryland also addressed the gathering, which was broadcast via Facebook Live. “Not only does ordering President Trump’s OMB Director Mulvaney to moonlight as the CFPB director contradict the plain language of the CFPB statute but it also makes a mockery of the idea of an independent federal agency,” said Raskin, a former constitutional law professor.

The vigil became the backdrop for reports by CNN, CNBC, Fox News, and NPR on the Trump administration’s effort to hamstring the CFPB’s work. Donner also spoke to The Associated Press. The hashtag #DefendCFPB began trending on Twitter later in the day.

Raskin had harsh words for Trump’s appointees to regulatory bodies after campaigning as the champion of the little guy. Between the attempted designation of Mulvaney and the accomplished appointments of Education Secretary Betsy DeVos and EPA head Scott Pruitt, “President Trump has temporarily succeeded in putting the Joker, the Riddler and the Penguin in charge of Gotham City,” Raskin said.

Under the Dodd-Frank law that created the CFPB, the president nominates the head of the agency, who must be confirmed by the Senate. Cordray, the former director, won the votes of 66 senators in 2011.

“Now, the president should nominate someone with a track record of fighting for consumers who will enjoy bipartisan support in the Senate,” Donner said.

Carter Dougherty is the Communications Director for Americans for Financial Reform. This piece was originally posted on the group’s blog.

This provision of the Inflation Reduction Act will discourage corporations from siphoning resources from worker wages and productive investments for share repurchases that inflate CEO pay.