People Power in Romania Stopped a Mining Project. Now the Corporation is Suing for Billions of Dollars.

Recently, a colorful group gathered outside a World Bank building in downtown Washington, D.C. to defend a community 5,000 miles away in Romania. Most had never met each other but when each pointed to her or his hand-drawn sign it was smiles and nods all round. And before you knew it, they were chanting slogans together as if they had done this before, including one in the Romanian language: “Uniti Salvam Rosia Montana!”

Several Romanian citizens were joined at the demonstration by activists from the Center for International Environmental Law, the Institute for Policy Studies, Earthworks, the AFL-CIO, and other U.S. environmental justice organizations. All had come together to defend a place called Rosia Montana.

Nestled in Romania’s mountainous and resource-rich region of Transylvania, Rosia Montana is a pretty town with a history dating back 2000 years. This place, however, holds an ineffable importance that goes beyond its historical significance. Today, it is an inspiring example of how a group of stubborn local farmers fought for their homes, their community, their lands, and their cultural heritage in the face of an assault by a Canadian mining corporation, Gabriel Resources.

This corporation wanted to destroy Rosia Montana by turning it into Europe’s largest open-pit gold mine, posing a severe environmental threat due to the use of toxic cyanide. It was David against Goliath. Gabriel had the money, it had connections to the highest echelons of power, and it controlled Romania’s media via million-dollar publicity contracts. In Rosia Montana, they waged nothing short of a war — buying up vital communal infrastructure, such as shops, the local dispensary, etc. to close them down. They also offered money for homes and so divided the community, setting family members against each other. 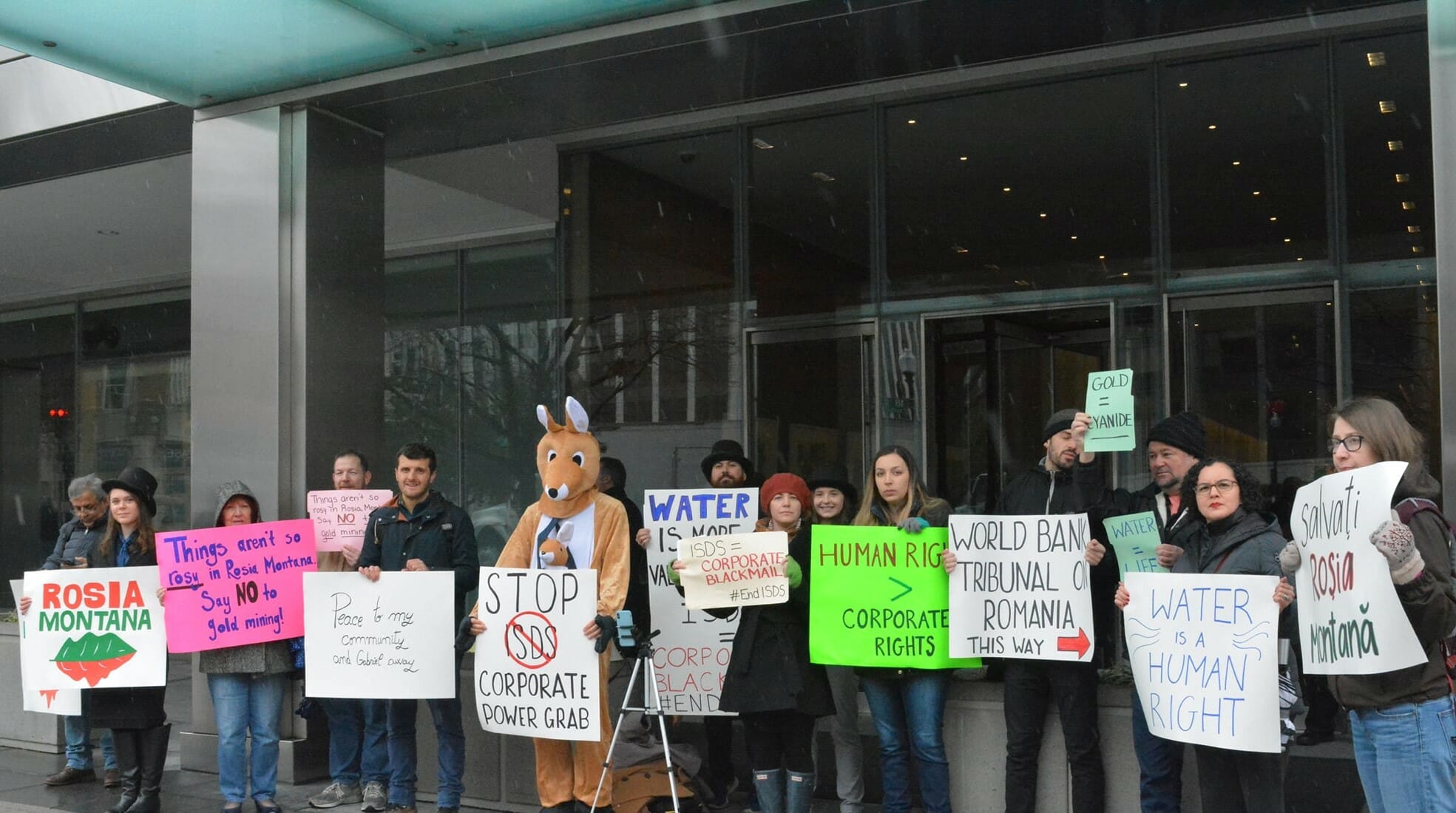 Many locals gave in. But a group of property owners resisted. To them, a home and roots meant more than any money in the world. They ganged together, set up a powerful campaign, and sued to block permit after permit. And when they blocked the mine proposal from all legal corners, Gabriel’s shareholders grew impatient and ever more nasty. They pressured its partner in crime or joint venture, the Romanian government, to pass a law to fast-track the mine. Those refusing to leave could be quickly expropriated.

Luckily the locals’ 15-year-long struggle had not gone unnoticed. It had spread by word of mouth and later, via social media. In 2013, when the government proposed that illicit law, when everything seemed dark and bleak, an entire nation inspired by the stubbornness of Rosia Montana’s resistance came to their support.

To the arbitrators, Rosia Montana is about money, money, and again money.

Hundreds of thousands took to the streets until the government backed down. Together they won. This moment, known as “Romania’s autumn” was equivalent to a revolution, to a national awakening. People, whether young or old or urban or rural, realized that if you fight together, you can win together. The slogan that coined this moment is “Uniti Salvam Rosia Montana!” — united we save Rosia Montana.

That moment forever transformed the country’s political landscape, too. The spirit, the wit, the feistiness, the organizing, and the tactics used in 2013 catalyzed movements such as #rezist, which halted political attempts by corrupt politicians to weaken the judiciary’s independence.

You might think, “Cool! A happy ending! So what was all the fuss in D.C. last week about?” Good question. It’s about profit and how to make one when there isn’t even a millimeter of reason to make one.

Rather than admitting the gross injustices and illegalities they committed, Gabriel (TSX:GBU) was very miffed that all their Corporate Social Responsibility endeavors, public relations exercises, mitigation, and you-name-it stunts didn’t result in a permit for their mine.

They now want their money back. And because they are greedy, they not only want compensation for what they already spent, but also what they hoped to make in the future with an operating mine. In 2015, Gabriel submitted a legal claim, demanding at least $3.3 billion and as much as $4.4 billion (the equivalent of about 2 percent of the country’s GDP). To do so, they invoked bilateral investment treaties between Romania and the UK. These treaties allow corporations to sue governments in international tribunals through an investor-state dispute settlement system (ISDS). The most-used tribunal for such cases is the International Center for the Settlement of Investment Disputes (ICSID), which is associated with the World Bank.

On December 13, ICSID arbitrators came together for what may well be their last hearing before they announce their ruling in spring next year. It’s quite likely that Gabriel is using this lawsuit to pressure the Romanian government to reach a settlement agreement before this ruling, which could include green-lighting the gold mine.

Among the colorful group protesting at the ICSID building last week was Adrian Petri, a young and successful entrepreneur from Rosia Montana whom CIEL had invited. Reporting back home, he wrote, “To the arbitrators, Rosia Montana is about money, money, and again money. It could have been about Rosia Montana’s locals and the suffering brought to them. Or about how the mine proposal divided the community. Or it could be about nature and the fact that they wanted to poison the people and the environment with cyanide. Or about our unique cultural heritage dating 2000 years back, threatened by destruction.”

For 20 years locals from Rosia Montana fought for a place called home. And while the story is not yet over, neither is their struggle.

Stephanie Danielle Roth is a volunteer with the “Save Rosia Montana!” campaign.

Postal Workers Deliver 20 Million Packages Per Day. What Can We Give Them in Return?