The 24th annual Institute for Policy Studies ‘Executive Excess’ report offers a first-ever look at the jobs record of U.S. firms that pay taxes near the rates the Trump White House favors.

House Speaker Paul Ryan is proposing to cut the statutory federal corporate tax rate from 35 to 20 percent. President Trump wants to slash the rate even further, to just 15 percent. Their core argument? Lowering the tax burden will lead to more and better jobs.

To investigate this claim, we set out to analyze the job-creating performance of the 92 publicly held American corporations that reported a U.S. profit every year from 2008 through 2015 and paid less than 20 percent of these earnings in federal corporate income tax.

These 92 corporations offer an ideal test for the proposition that lower tax rates encourage corporations to create jobs. By exploiting loopholes in the existing federal tax code, all these firms have reduced their tax rates to the level that Speaker Ryan and President Trump claim will stimulate job creation. Did these reduced tax rates actually lead to greater employment within the 92 firms? We crunched data available from the Institute on Taxation and Economic Policy to find the answer.

Our findings appear in the just-published 24th edition of the annual Institute for Policy Studies Executive Excess report. And what exactly did we find?

Tax-dodging corporations paid their CEOs more than other big firms.

Several specific major corporations jump out from our analysis. ExxonMobil, for instance, emerges as particularly poor corporate “citizen.” The oil giant paid an effective tax rate of only 13.6 percent during the 2008-2015 period, at the same time cutting more than a third of its global workforce (the company does not reveal U.S. jobs data).

After pumping nearly $146 billion into stock buybacks, Exxon CEO Rex Tillerson, now the U.S. secretary of state, took home $27.4 million in total compensation in 2016, 22 percent more than he collected in 2008.

But ExxonMobil hardly stands alone. AT&T actually emerges as the top job-cutter among the tax-dodging corporations we analyzed. The telecommunications giant managed to get away with an effective tax rate of just 8.1 percent over the 2008-2015 period, while cutting more jobs than any other firm in our sample.

After accounting for acquisitions and spinoffs, AT&T had nearly 80,000 fewer employees in 2016 than in 2008. Instead of making job-preserving investments, the firm shoveled profits into stock buybacks ($34 billion over the past nine years) and massive CEO paychecks. AT&T chief Randall Stephenson pulled in $28.4 million in 2016, more than double his 2008 payout.

General Electric, meanwhile, stashed enough corporate earnings in overseas tax havens to achieve a negative effective tax rate during the 2008-2015 period. How can a tax rate be negative? GE received more dollars back from Uncle Sam than it paid into federal coffers. How did GE repay the taxpayers of America for their generosity? The company spent $42 billion repurchasing its own stock, a neat move that helped boost CEO Jeffrey Immelt’s pay to nearly $18 million in 2016.

What about jobs at GE? The company’s employee count has dropped by about 14,700 over the past nine years.

CEOs of large American corporations have for far too long been rigging the rules to enrich themselves at the expense of taxpayers, workers, and communities. America needs a serious unrigging. In this year’s Executive Excess report, as in previous editions, we’ve included a “scorecard” of CEO pay reforms that would help end the job-killing games that U.S. corporate executives play.

Our nation also desperately needs a tax reform debate that dispenses with the fantastical notion that corporate tax cuts will automatically create good jobs for American workers. Policy makers should be focusing instead on ensuring that corporate America pays its fair share of the cost of job-creating public investments in infrastructure and other urgent needs.

A solid first step would be to eliminate loopholes that grant preferential treatment of foreign profits. U.S. corporations should have to pay what they owe on their current offshore holdings and not be allowed to defer these payments indefinitely. By continuing to allow offshore tax sheltering, policy makers are shifting the tax burden onto ordinary Americans and creating a disincentive for job creation in the United States.

Beyond closing loopholes, we need new innovative policies — a tax on Wall Street speculation, for instance — that would help generate much-needed revenue for investments in real jobs. Americans for Tax Fairness is now offering online an array of promising ideas on how to reform tax rules to help make them work for all of us, not just big companies and their CEOs. 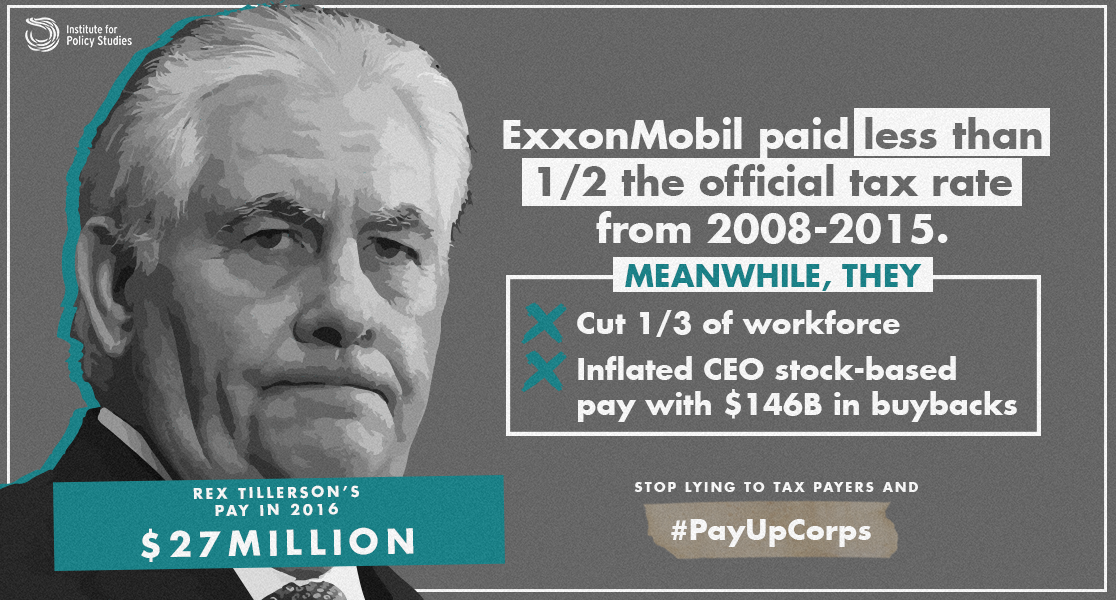 The United States of Tax Havens

Like our billionaires at home, foreign oligarchs and despots are sheltering untold sums from taxation across our country.

How South Dakota Became a Tax Haven for the Super-Rich

As the Pandora Papers exposed, for the last 30 years, multimillionaires and billionaires have parked their wealth in the state of South Dakota to avoid taxation and secure dynastic wealth for generations.

Should Ordinary Taxpayers Foot the Bill for Rebuilding the Gulf Coast’s Petrochemical Industry?

A Tale of Two 1 Percents