In 1996, Steve Wing, an epidemiologist at the University of North Carolina, was among the first to provide evidence of the disproportionately harmful health impacts on poor people of color caused by industrial-scale hog operations. Recently, the National Academy of Sciences published the first comprehensive assessment of U.S. deaths from airborne agricultural pollutants. This research provides strong vindication of the path-breaking work of Wing and his colleagues.

According to the new study, U.S. agricultural production results in 17,900 air quality-related deaths per year, with about 80 percent of these deaths due to airborne contaminants from large-scale animal farms. Emissions from animal factory farms, known as confined animal feeding operations (CAFOs) account for more annual deaths than pollution from coal power plants.

One out of every four of these deaths is from pork feeding operations, which generate billions of gallons of waste, largely dumped directly in open lagoons and then sprayed on farmland. Much like human waste, the hogs expel large amounts of bacteria-laden pathogens, hydrogen sulfide, and ammonia. 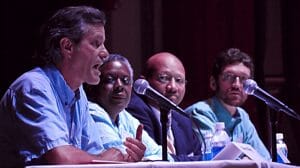 A typical CAFO holds thousands of hogs in cells just large enough for the animals to stand in place. They are fed by conveyor belt along with antibiotics to stem infections and stimulate growth. In southeastern North Carolina counties, about 10 billion gallons of fecal waste is dumped directly from the animal cages into the lagoons each year.

After anerobic digestion (a process by which the waste is placed in tanks and broken down to produce biogas and biofertilizer), the waste is sprayed over fields. Based on geospatial data, the Environmental Working Group reports that more than 250,000 homes in North Carolina are within three miles of a CAFO.

Over several years, Wing and his colleagues compiled a large body of data indicating that emissions from open lagoons and field spraying were harmful to nearby residents. They documented increases in blood pressure, asthmatic symptoms in children, headaches, diarrhea, and upper respiratory problems. Odors, described as being “like the smell of rotting corpses,” were so strong and pervasive that residents could not venture outside of their homes for days on end.

Wing and his colleagues reported that Black, Latino, and American Indian residents in North Carolina were nearly twice as likely to suffer from health problems associated with toxic fecal waste in the air because they were much more likely to live within three miles of such operations. They pointed out that industrial hog facilities are relatively absent from low-poverty white communities in the state.

Big agribusiness was not pleased. The North Carolina Pork Council, dominated by corporations such as Smithfield Foods, which owns one the world’s largest pork slaughterhouse in North Carolina, demanded in 1999 that Wing turn over his research and threatened to sue if he did not comply. In the end, Wing shared some of his records but refused to comply with the Council’s demand for personal identifiers of nearby residents who cooperated in the study. Not only would this have violated personal privacy protections, it could’ve made the participants vulnerable to harassment and intimidation.

“By joining movements for human rights and social justice, health scientists can contribute to efforts to reduce health inequalities.”

The pork industry’s heavy-handed efforts did not prevent Wing’s research from helping residents living near the CAFOs achieve some accountability in the courtroom. By 2019, several lawsuits filed against a subsidiary of Smithfield responsible for managing the factory hog farms resulted in millions of dollars awarded to dozens of residents. In the end, pork corporations tried to muzzle Wing, but could only persuade his university to take way his parking space.

Wing passed away due to cancer at age 64 in 2016. That year, in his last published paper, he wrote: “By joining movements for human rights and social justice, health scientists can identify research questions that are relevant to public health, develop methods that are appropriate to answering those questions, and contribute to efforts to reduce health inequalities.”

Robert Alvarez is an Associate Fellow of the Institute for Policy Studies and former Department of Energy Senior Policy Advisor to the Secretary and Deputy Assistant Secretary for National Security and the Environment.