Who’s Paid the Biggest Worker Abuse Fines? The Answer May Surprise You.

Big banks not only mistreat customers. They've also faced some of the heaviest fines for mistreating their employees.

For a long time, the corporation that stood out as America’s worst employer was Walmart, given its reputation for shortchanging workers on pay, engaging in discriminatory practices and ruthlessly fighting union organizing drives. Today, Amazon.com seems to be trying to take over that title, at least for its blue-collar workforce.

Yet when we look at the corporations that have been paying the most penalties for workplace abuses, there is another contender for the top, or really the bottom, spot among U.S. employers: Bank of America. In Big Business Bias, a report just published by the Corporate Research Project of Good Jobs First, we found that BofA has paid more in damages, settlements, and fines in workplace discrimination and harassment cases than any other large for-profit corporation.

In Grand Theft Paycheck, a report we published last year on wage theft, BofA ranked third (after Walmart and FedEx) in total penalties paid in private wage and hour lawsuits and cases brought by the U.S. Labor Department.

BofA’s position in these tallies is to a significant extent the result of cases brought against its subsidiary Merrill Lynch, which the federal government pressured it to acquire during the financial meltdown in 2008. Merrill accounts for 95 percent of the $210 million in penalties BofA has paid in discrimination cases and more than one-quarter of the $381 million paid in wage theft cases. 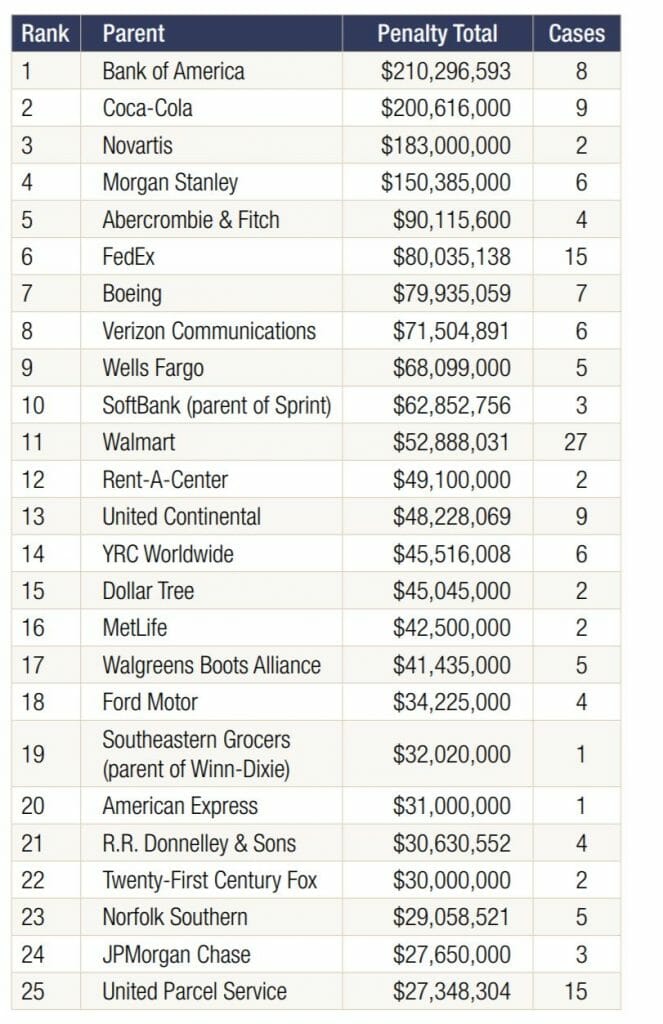 This track record was similar to that of BofA before the merger. For example, in 1998 the bank paid $187 million to settle allegations that in its role as bond trustee for the California state government it misappropriated funds, overcharged for services and destroyed evidence of its misdeeds. BofA later paid to settle lawsuits concerning its dealings with Enron ($69 million) and another corporate criminal, WorldCom ($460 million).

In the wake of the financial crisis, BofA had to enter into several multi-billion-dollar settlements concerning the sale of toxic securities and various mortgage abuses. It is for all these reasons that BofA tops the Violation Tracker ranking of the most penalized parent companies, with payouts of more than $58 billion.

BofA is not unique in this respect. Another major bank is also one of the ten most penalized corporations overall as well as high on the lists of those with the most penalties related to workplace discrimination and wage theft. That bank is Wells Fargo, which ranks sixth on the Violation Tracker list with over $14 billion in penalties, ninth in the discrimination tally with $68 million and fourth in the wage theft tally with $205 million.

Wells Fargo, of course, is notorious for creating millions of bogus accounts to generate illicit fees and other deceptive practices. Last year, the Federal Reserve took the unprecedented step of barring the bank from growing any larger until it cleaned up its act. The agency also announced that the bank had been pressured to replace four members of its board of directors.

Why Indian Workers Say the Modi Government Must Go